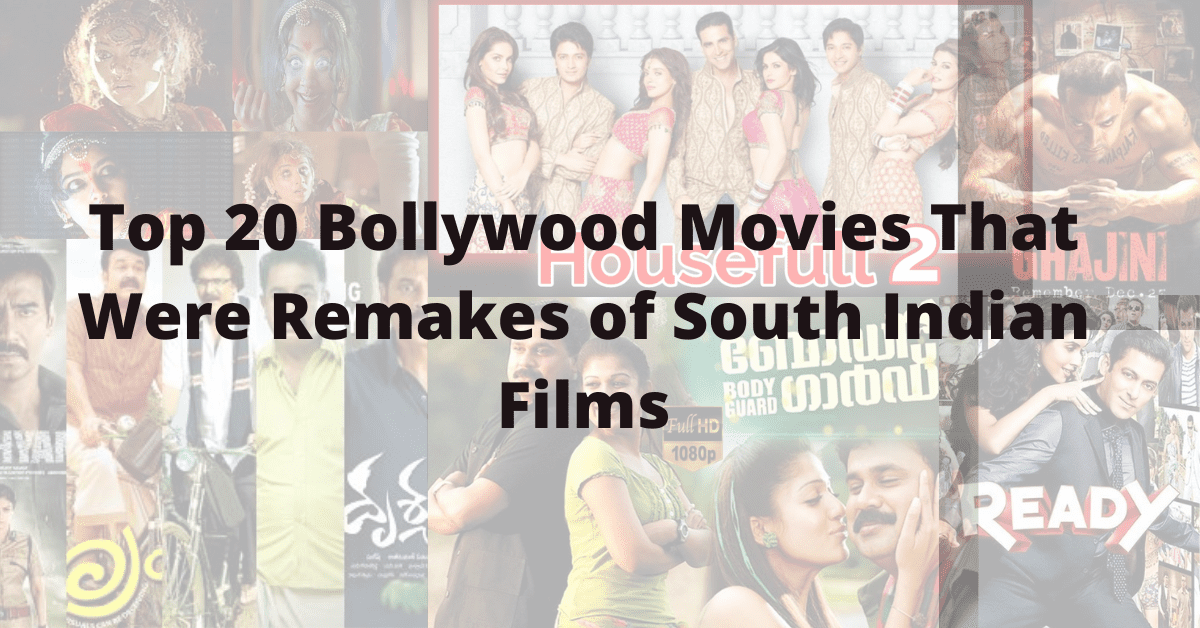 Do you watch South Indian Films? Do you find similarities between South Cinema and Bollywood? If not then you are going to love this article because most of the all-time favorite Bollywood Movies are based on the storyline of South Indian Movies. A lot of attention is given to any Bollywood Blockbuster, but did you ever realize or even thought that the same storyline may exist in another language. Yes! The South Film Industry has been an inspiration for Bollywood. Remakes have been the staple diet for Bollywood Cinema since the Seventies. And what’s wrong in that Tamil or a Telugu Movie holds different target audiences, and Bollywood Movies accounts to Hindi viewers. Does this mean Bollywood isn’t creative enough? Hindi cinema audiences have witnessed superhits like “Seeta Aur Geeta” “Amar Akbar Anthony”, “Jab We Met” “Bawarchi”, and much more, which later on were re-made in South Cinema. And there are plenty of South Indian Films remakes which have become quite a superhit, don’t believe us? To name a few like “Hera Pheri”, “Nayak”, “Bhool Bhulaiyaa”, “Ghajini” and we know that these all films were a superhit in their respective period.

The story was penned by Kamal Haasan and remade after the huge hit of the Tamil film Thevar Magan. Virasat is a Full Action-Drama film which received sixteen nominations at the 43rd Filmfare Awards, including Best Film, Best Director for Priyadarshan, Best Actor for Kapoor and Best Actress for Tabu.

A Comedy- Classical Drama film directed by David Dhawan and produced by Vashu Bhagnani, being a remake of the 1995 Tamil film Sathi Leelavathi. Prem Mehra is married to the loving yet traditional Pooja Makhija, and they have 2 children. Rupali Walia arrives at Prem’s office to give an interview for the role of a model. They are attracted to each other, ultimately fall in love and begin a romantic relationship. Rupali is much preferable to Prem due to her modern lifestyle and fashionable choices as compared to Pooja. Pooja learns about them and asks Prem to choose between Rupali or his family.

Melodrama Comedy film directed by Raj Kanwar. The film revolves around a greedy wife Kajal (Sridevi), who, lured by wealth, convinces her husband (Kapoor) to marry a second time. The film was widely praised for the performances of the lead actresses. It served as the remake of 1994 Telugu movie Subhalagnam.

Action-comedy film, directed by David Dhawan, produced by Sajid Nadiadwala. The film is a remake of the Telugu film Hello Brother (1994), which in turn is inspired from the Hong Kong action-comedy film Twin Dragons (1992) starring Jackie Chan. Film was a quiet success at the Indian Box Office.

Originally this movie follows the storyline of a TV show which was popular in 1971 “See The Man Run” Copied by Malayalam Film Industry and then we see in Bollywood. All-time favorite movie which was followed by sequel “Phir Hera Pheri” released in 2006.

Hindi-language romantic drama film directed by Shaad Ali and produced by Mani Ratnam and Yash Chopra under Yash Raj Films. We see Vivek Oberoi and Rani Mukerji in lead roles, with Shah Rukh Khan and Tabu appearing in extended special appearances. Film was a hit as per the Box Office India.

Critics gave mixed reviews to Nayak, applauding the performances of Kapoor and Puri from the first-half but slamming the special effects, which they credited to the film’s commercial disappointment. Some of them clapped at the performances of the cast but complained about its extensive duration and special effects. Political action film directed by S. Shankar and produced by A. M. Rathnam under the Sri Surya Movies banner. A re-creation of Shankar’s 1999 Tamil-language film Mudhalvan.

Hindi fantasy film released in India on 24 June 2005. It is a remake of the 1973 Hindi movie Duvidha by Mani Kaul founded on the short story on paper by Vijayadan Detha in Rajasthani and was somewhat stirred by the 1997 Kannada movie Nagamandala created on the play of same name by Girish Karnad. The working title of the movie was Ghost Ka Dost. Paheli was India’s certified entry to the 2006 Oscars.

Drama film written, produced and directed by Ashutosh Gowariker. The film was well-thought-out and was ahead of its time, and acknowledged universal critical acclaim at its release. Shahrukh’s presentation in this film is watched as among one of the finest performances of his profession. The film was reported to be inspired by two episodes of the series titled “Vaapsi” on Zee TV’s Yule Love Stories (1993 – 1995) which starred Gowariker in lead role.[7] The story of the lead role setting up a micro hydroelectric project to generate electricity was reported to be inspired by the Kannada novel Chigurida Kanasu

A comic genre film, for which Akshay Kumar was awarded BestActor in a Comic Role. This film has gained a cult following and has been regarded as one of the best Bollywood films in the comic genre. It is a remake of Priyadarshan’s own 1985 film Boeing Boeing which was a re-creation of 1965 film of the same name which in turn was based on the 1960 French play of the same name.

Action thriller film written and directed by A. R. Murugadoss, jointly produced by Allu Aravind. A remake of Murugadoss’s own 2005 Tamil film of the same name which in turn is encouraged by the 2000 film Memento and 1951 British film Happy Go Lovely. Released theatrically on 25 December 2008, Ghajini turned into the highest-grossing Indian film of the year, and the foremost Bollywood film to cross the ₹100 crore mark domestically, forming the 100 Crore Club.

Action comedy-romance film, the film was produced by Boney Kapoor and Sridevi. The film received diverse appraisals and couldn’t get much appraisals on Box Office

Thriller film directed by Nishikant Kamat. The film is a remake of the 2013 Malayalam-language film of the same name. The film was jointly produced by Kumar Mangat Pathak, Ajit Andhare and Abhishek Pathak. It grossed ₹938.5 million in India and a worldwide total of ₹1,110.5 million worldwide.

Hindi-language action-comedy film directed by Prabhu Deva and produced by Sanjay Leela Bhansali and Ronnie Screwvala under the UTV Motion Pictures and Bhansali Productions banners. A remake of the 2006 Telugu blockbuster Vikramarkudu directed by S. S. Rajamouli, based on an original story written by K. V. Vijayendra Prasad. The film was declared a blockbuster at the domestic and worldwide box office

Action-comedy film directed by Anees Bazmee. Produced by T-Series Films, Rawail Grandsons Entertainment and Software Pvt. Ltd. the film is the official remake of the 2008 Telugu film of the same name directed by Srinu Vaitla. The film received varied reviews from critics, with commendation for its music, humor and Khan’s performance, but condemnation for its extent and script.

Hindi-language comedy film directed by Priyadarshan. The story is a somewhat version of Hollywood film “Screwed” and some parts from Priyadarshan’s own Malayalam film Vettam. Titled as a moderate box office success.

Hindi-language romantic action-comedy film co- written and directed by Siddique Ismail.[4] It is a remake of the director’s own 2010 Mollywood film of the same name. The film broke many records upon its release. Within the first day of its release, it went on to become the highest opening day grosser as well as the biggest grosser ever for a single day up until then. Regarded as a major commercial success.

Hindi comedy film directed by Sajid Khan and produced by Sajid Nadiadwala, being an uncredited remake of the Malayalam film Mattupetti Machan and the second part of Housefull film franchise. received diverse reviews from critics who admired the cast and humor but disparaged writing, screenplay, cliches and direction.

Uttar Pradesh Opinion Poll 2022: Which party will win 2022 UP Elections?