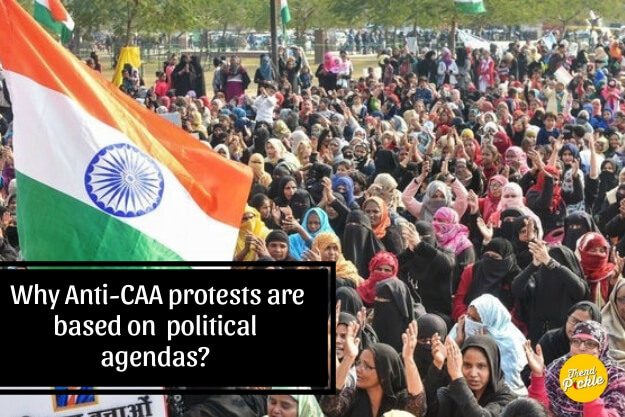 Why a law democratically passed in good faith is facing so many criticisms and backlashes? There are many arguments for it.

Firstly, the protesting masses believe that there is a direct attack on the soul of the constitution and the idea of secularism. But is that the case? We are aware of the fact that secularism is fundamentally the separation of state and religious institutions. It is about giving respect to all religions. But does that stop India from making a reasonable classification? According to eminent jurist Harish Salve, it does not. These are the minorities of the Islamic states that have suffered because of India’s decision in the past. So, is India not obligated to give them preference? For protestors, it is a matter of thinking over, and for India, it is subject to its policy. In the whole process, people have become completely ignorant of the surprising decline of non-muslims in these Islamic states. Pakistan, Bangladesh, and Afghanistan have not been fair to the freedom and rights of its non-muslim masses who are considered zimmi in their own country. It is as if they want to forget how the Islamic Republic, again and again, curbs freedom of expression and equal opportunity for non-muslims in society.

The question again arises if Muslims degrade as second-class citizens by identifying all the other groups in the act but not them. One has to grow above this misguided sense of equality and move towards the context-sensitive reality of Indian history. Relaxing the citizenship of India for those very people who never believed in the idea of a secular country may be generous on the part of India, but then let’s do away with our borders also if we have to allow everyone.  Here you can read the myths of citizenship amendment act.

Muslims who are coming inside the country illegally, are either coming because of economic reasons or sectarian violence. Sectarian violence is a problem all around the world, and it is an intra-religious matter for the Islamic republic to resolve. Should we not pressurize such countries to deal with such issues at the domestic level, or do we want to encourage the trend of immigration and the tragedy and pressure it brings on the land that shelters the immigrants? The passing of this bill was an opportunity for the Indian population to raise the issue of religious persecution of non-muslims. But, they chose to turn this opportunity into an anti-establishment sort of movement.

Dr. Abul Barkat is a famous economist. He has written in his book ‘Political economy of reforming agriculture-land-water bodies in Bangladesh’ that with the current rate of “exodus” there will be no Hindus left in Bangladesh. In Pakistan, the number of abductions and forceful conversions and marriages of non-muslim girls is nothing new. So, now the absence of the word ‘religiously persecuted’ in the bill is a problem of opposition to deal with because proving that there is no religious persecution would be a loser’s argument.

Now a serious argument is that the CAA violates Article 14 of the Indian Constitution. But on the other hand, Article 14 is the test of the sample. You do not equate unequal with the equals. There is a reason we have reservations and quotas for minorities and even special provisions for their belief system. So, what we can understand from this is that Article 14 is not about just flattening everyone out. There is a provision of reasonable classification which can help CAA pass the test of constitutionality.

Opposition parties have their agendas. They thrive and survive because they oppose the government in power. They have proposed the same bill but with only two religious groups in the past. And, it was none other than Dr. Manmohan Singh to discuss it in the house. At that time, they fully supported it but, now it is miraculously against the very idea of India and two-nation theory in practice. West Bengal CM, Mamta Bannerjee, has very oddly expressed her support to all the Bangladeshis in Bengal. The state government of Bengal has been complicit in providing them voter IDs to pamper them for its vote bank. All this at the cost of national security. Also, in the state of Jammu and Kashmir, you needed a mandatory permit to enter and live in the valley. But, Rohingyas are settled without any opposition from anyone. Isn’t that just because of their ethnicity and their selfish political interests? And this all is happening without any permission and illegally.

Rohingyas are originally Bangladeshi Muslims from Chittagong that moved to Myanmar and have always found their allegiance to Pakistan. Apart from that, LeT commanders have been spotted among them along the Bangladeshi borders. They are suspected by the intelligence wing of Bangladesh to instigate Rohingya Muslims against India. Haafiz Saeed, a Pakistani terrorist, has openly blamed India to help Myanmar in the genocide of Rohingyas. The Indian government in such a condition has all the right to eliminate anyone that is of suspicious cause and purpose in the interest of the national security of the country. Not everyone can be a potential threat but India is not obligated to shelter them as it is not a signatory to the UN Refugee Convention of 1951 or the 1967 Protocol. It does not need to protect refugee rights.

Recently, UNHRC moved to the supreme court of India to file a plea challenging CAA, calling it fundamentally discriminatory. The question is if we are from now on going to allow external bodies to play with the sovereignty of India. Is the UN trying to push India into the corner and force it to accept refugees? Here is how Harish salve reacted.

When people argue that why relaxation for Parsis of neighboring state but not Parsis of Iran who are persecuted, the plain and simple logic is that the people who are being given the citizenship have suffered because of partition of India or ethnic cleansing people of indigenous faiths by the Islamic countries that were either neighbors or part of undivided India. There is a moral responsibility that the lawmakers feel towards those people. And it is a one time process for those who have come to India before the 31st of December, 2014 and belong to the minority groups of Islamic states. The reason, the sense of moral responsibility and the objective is plain and simple. But the Muslims of India are made to believe that CAA along with NRC is going to put them in detention centers and the rest of the religious groups will be saved with the help of CAA. However, CAA is not legally broad enough to be applied to Indian citizens because for that one has to be a religious minority of one of the neighboring Islamic countries as mentioned in the act itself. Supreme court Lawyers like J. Sai Deepak have cleared it from the very beginning but the fear remains or propaganda by opposition continues.

This is what eminent lawyer J. Sai Deepak says.

Our internal matters should not be handled by foreign voices or propagandists causing communal disharmony. Every Indian should believe in the majesty of the Indian laws and its Apex Court and have the humility to wait for its verdict to refrain from intellectual arrogance.