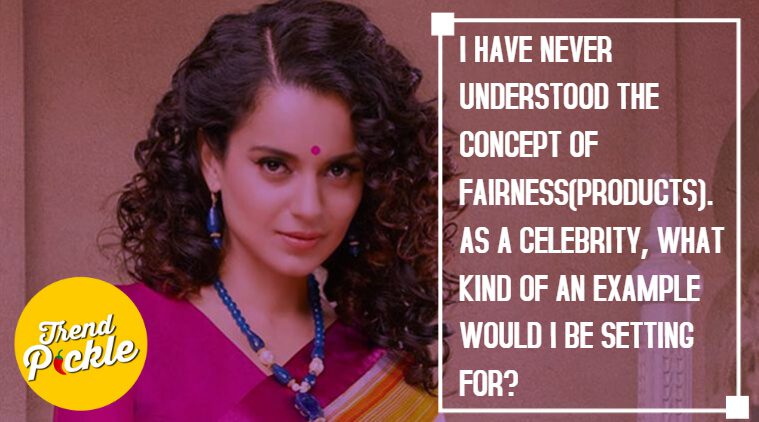 Kangana Ranaut, a small-town girl with dreams reaching the skies and beyond has made a mark for herself in the brutal reality of the film industry. Standing firm against all the judgements and criticisms , calling spade a spade and giving Bollywood biggies the taste of their own medicine is how we have seen her so far. She has been the centre of many controversies but her honesty always compels her fans to switch to a different point of view and see the world through her glasses. Here are some very ingenious comebacks by Kangana that have left us in awe of her.

1)Kangana has time and again talked of the other actors of Bollywood not giving her due attention or credit for the work she has been doing. And she thinks it is because of their ‘insecurity’ around her.

2) Very cleverly Kangana Ranaut has expressed her views on the ongoing turmoil in the country and the violent protests that followed Citizenship Amendment Act this year. She very quietly but firmly slapped those who are the ‘revolutionaries’ in their minds.

3) Very candid and extremely blunt- Kangana Ranaut talks about nationalism and asks people to stop living in an esoteric world. She openly supports the nationalistic narrative of “India First” and ban on Pakistani actors for their money, as taxes, is used against India’s defence.

4) Remarkable use of words again and again has proved her someone to be looked upto when you feel insecure expressing your values and feelings around whatever is going on in the country. Kangana takes a jibe at so called ‘liberals’ for their approach towards cow protection and cow vigilantism during a conversation with Sadhguru. She calls the ‘skeptics’ of today ‘space cadets’ who don’t know where they are headed to.

5) In a conversation with Anupam kher, Kangana talks about nepotism in the industry and how priviledged actors’ reply, “Is it our fault that we are lucky?” is mediocrity personified in front of the people and they can stop feeding others their idea of being ‘lucky’.

6) Kangana responded to Saif ali Khan’s comment on the absence of the idea of India as a nation before the Britishers colonised us. Making it very clear that she will never side with ‘tukde-tukde gang’ despite their democratic right of forming a different opinion suiting their narrative, she cleared the air in one sentence, “Bharat nahin tha toh Mahabharat kya tha?”.

7) Recently after the brutal killing of Kashmiri Pandit, Ajay Pandita, in the valley, Kangana released a video statement criticising the selective activism of the pseudo liberals of India. And says that teaching Hindus about tolerance and humanity is like ‘pot calling the kettle black’.

8) Also, as the #blacklivesmatter protests reached the twitter handles of artists in India, Kangana Ranaut on BBC slammed Bollywood for remaining mum about the issues in their own country where they are more impactful as compared to the rest of the world. She calls out their hypocrisy for filling Indians with inferiority complex while advertising for various fairness products and at the same time joining the bandwagon of the west to eradicate racism when they have failed to do so in India.

Kangana’s witty replies and her being the centre of some controversy have no end. She has stood against all odds and voiced out her opinions unapologetically without any shame or regret. Hope she continues to be this honest because we all are done with selective activism and hypocrisy of the people and we need those who make their stand clear.