1. The first component of ISS was launched into Earth’s orbit in 1998 and the last pressurized module was fitted in 2011. The ISS was built by the cooperation of five major space agencies –  NASA, RSA, ESA, CSA, and JAXA.  Sixteen countries have contributed to the construction of ISS -United States, Canada, United Kingdom, Russia, Japan, Belgium, Brazil, Denmark, France, Germany, Italy, the Netherlands, Norway, Spain, Sweden, and Switzerland. 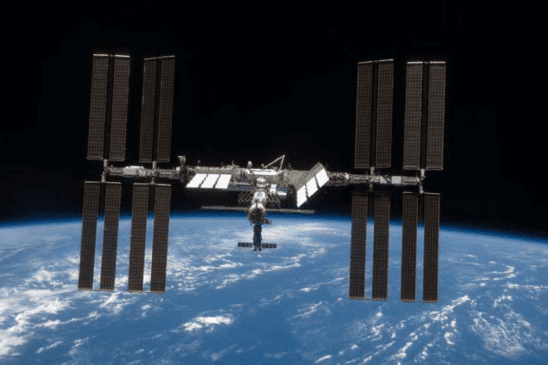 4. The size of ISS is about 356 feet(109 meters) by 240 feet (73 meters) which is slightly larger than a football field giving astronauts enough space. A crew of 6 people from multiple countries lives and work on the space station. The ISS is almost four times as large as the Russian space station Mir and about five times as large as the U.S. space station Skylab. ISS has an internal pressurized volume of 32,333 cubic feet which is equal to the volume of a Boeing 747.

5. ISS is the largest man-made structure put into low Earth orbit and can often be observed from Earth with the naked eye on a clear day. You can check the exact time and direction where you can find the space station in the sky.

6. The total space for living and working in the space station is larger than a six bedroom house. The station features six sleeping quarters, two bathrooms, a 360-degree view window and a gym. The ISS weighs almost one million pounds which is the equivalent of more than 320 automobiles.

7. There have been 205 spacewalks on space station till date by Astronauts and cosmonauts for the construction, maintenance and repair of space station since December 1998.

8. The international space station is one of the most expensive single object built by the humans. The total cost is estimated at about 150 billion USD.

“It all gave a pleasant illusion of eternity, this quiet sailing under a perfect sky towards a horizon perpetually five miles ahead, never nearer.” – Patrick O'Brian pic.twitter.com/ufgS7HH3QG

9. There is microgravity on the space station. Microgravity refers to very low gravity or weightlessness which means gravitational forces are not quite zero but very small. In microgravity, bone and muscle loss occurs at a fast rate leading to an acceleration of age-related changes. Bone loss happens in the microgravity environment because bones no longer have to support the body against gravity. To reduce the loss of muscle and bone mass, the astronauts work out at least two hours a day.

10. The solar panels that power the space station have the wingspan of 73 meter (240 feet) which is about the same length as the world’s largest passenger aircraft, the Airbus A380.  The 75-90 kilowatts of power for the ISS is supplied by an acre of solar panels.

11. How much effort did it take to build the space station and how the components were delivered? The large modules and other pieces of the space station were delivered on 42 assembly flight –  37 on the U.S. space shuttles and 5 on the Russian Soyuz rockets. More than 115 space flights were carried out on five different types of launch vehicles for construction of the ISS.

12. It takes about 6 hours for a spacecraft to reach space station after it is launched from Earth. As many as 6 spaceships can be connected to the space station at once.

13. The station’s orbital path covers over 90 percent of the Earth’s population.

14. If you are traveling at speed of Space station, you can go to Moon and come back to Earth in a day.

15. 52 computers have been installed to control the systems on the ISS.

Do you know any other interesting International space center facts? Do let us know in the comment section.