“The Statue of Liberty Enlightening the World” is a brilliant sculpture, the world famous monument that was gifted to the United States by France in 1886. Being the colossal and majestic monument it is, it has managed to attract tourists from all over the world for many years now. Commonly known as ‘Statue of Liberty’, this monument is situated on the Liberty Island and is considered as a universal symbol of democracy and freedom. Although it is visited by millions every year, there are only a few who have in-depth knowledge about this fascinating monument. Hence, here’s a list of some of the most interesting facts about the Statue of Liberty that will make you surprise. 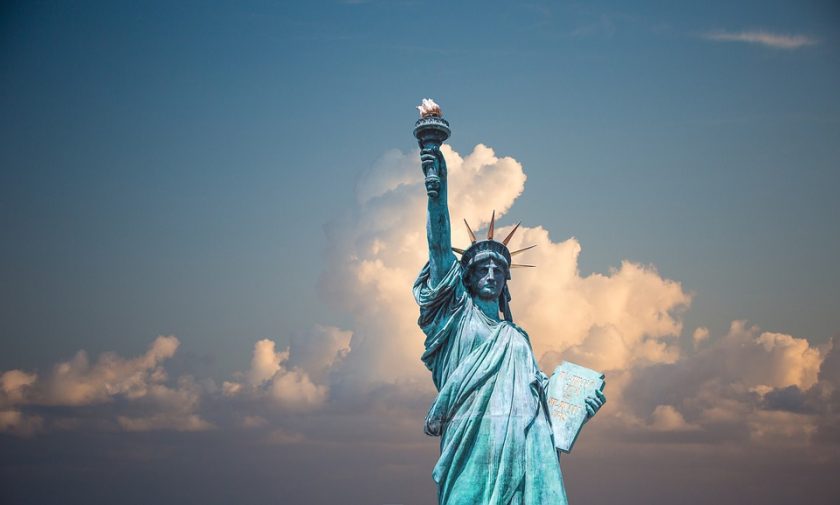 1. Height of Statue of Liberty

2. Weight of Statue of Liberty

This enormous monument weighs over 225 tons or 450000 pounds. Another interesting fact about this Statue is that it has an astonishing 35-foot waistline.

There are seven spikes on the crown that represent the seven oceans and the seven continents of the world. Each of this spike is 9 feet long and weighs around 150 pounds, representing the universal concept of liberty. There are also 25 windows in Lady Liberty’s crown.

4. Description of the Statue 5. Metals used for the Statue

The statue has an iron infrastructure while its exterior is made up of Copper. And due to oxidation of copper, the Statue has turned Green. The patina (green coating), although representing the damage caused, also helps in protection of the Statue from any more deterioration.

6. The Torch of Statue of Liberty

The torch in the Statue’s hand was replaced by a new torch during the restoration that was completed in 1986 because the original torch was in a really bad state. This new torch was made of copper and was also covered with thin sheets of  24k gold. 7. Fact about the Statue feet

This astounding Statue is standing, with a broken shackle and chains lying beside her feet. Her right foot is raised as if she is moving forward. This forward movement is depicted as the movement away from tyranny and slavery.

8. Depiction of the Statue

This statue of a robed female figure, holding a torch in her hand, is a statue of Libertas. Libertas is the Roman goddess of freedom so as the Statue depicts the freedom. 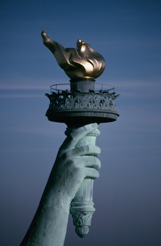 9. The Great men behind the art of the Statue

The idea for the statue was given by  Edouard de Laboulaye, while Frederic-Auguste Bartholdi was the one who converted this idea into a proper design. Frederic Auguste Bartholdi was commissioned to design the Statue Sculpture with the completion date of 1876 to celebrate American’s centennial of the American Declaration of Independence.

10. Design of the Statue

11. Early tourism for the Statue

The Statue of Liberty was open to the visitors until the terrorist attack on World Trade Center on September 11, 2001. Earlier, people were allowed to climb the winding staircase inside the statue that took them to the top of her crown.

The original torch, that got replaced in 1986, is now on display at a museum below, in the Statue pedestal.

13. Statue of Liberty: utilised as a Lighthouse

After its inauguration in 1886, the Statue functioned as a lighthouse for 16 long years. With an electric plant to generate power for light also on the Island, this Statue performed the role of a lighthouse until 1902.

14. Number of Steps in the Statue

A total of 192 steps help you reach the top of the pedestal from the ground while the number of steps between the pedestal and the crown is a staggering 354.

15. Shoe Size of the Statue

With such a grand structure, it is no surprise that the Lady Liberty wears a shoe sized 879, that is 25 feet long. Being the prime attraction of one of the most sought-after cities in the entire world, there are over 4 million people that visit the Statue of Liberty every year.

The Americans living in Paris reciprocated the generous act of France by building a replica of Lady Liberty in Paris in 1889. This statue, situated on a small island in River Seine, is made of bronze and stands around 35 feet high.

The face of the statue is around 8 feet tall and the model for the face is said to be inspired from the sculptor’s mother, Charlotte Bartholdi. 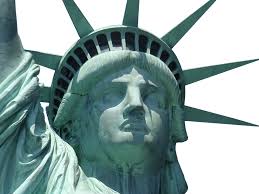 19. Construction of the Statue

Building up the gigantic monument back in 1886 was a huge thing and hence, there were 300 different types of Hammers used in the construction of the copper structure.

20. Contributions for the Statue

This monument got the status of a UNESCO World Heritage Site in 1984.

The statue was made up of 300 copper pieces. All these pieces were shipped to America in 214 crates on the French ship Isere. This ship had almost sunk in the stormy sea-waters.

The island where this Statue is situated was earlier known as the Bedloe Island. However, in 1956, the name was changed to Liberty Island, owing to the growing popularity of the monument.

In case of storms or even high winds that are of the magnitude of 50mph or more, the Statue can rock or sway by up to 3 inches, whereas the torch can move up to 5 inches.

It is said that around 600 bolts of lightning hit this Statue every year.

26. Dangerous attempts over the Statue

In 1944, after the victory of the USA in Europe during the Second World War, the lights in the crown of the Lady Liberty flashed “dot-dot-dot-dash”. This stands for V in Morse code, where V meant ‘Victory’.

28. Statue has a great importance

As the Statue is of National importance and holds a great place in American history, as it was a given to the United States from France to celebrate the friendship the two endured during the American Revolution. Over the years, the Statue of Liberty has symbolized the freedom and the democracy of the United States; two images of the statue has an appearance on a US $10 bill.

In 1982, nearly 100 years after its inauguration, it was observed that the head of the Statue had been actually installed two feet off the centre.

Even though it is situated near New Jersey, this Statue is a part of Liberty Island that lies within the State of New York, Manhattan.

Thus, there were many things about this world-famous monument that we are sure, you didn’t know about. How many of these facts about the Statue of Liberty did you know about? Do let us know in the comments below. Also, if you know any more of such interesting facts about this beautiful Statue, do share it with us.

No doubt, this article is indeed reliable. Thank you for sharing something that is utmost useful.

This is interesting and definitely will help people to understand and know more about the statue of liberty. Thank you for sharing!