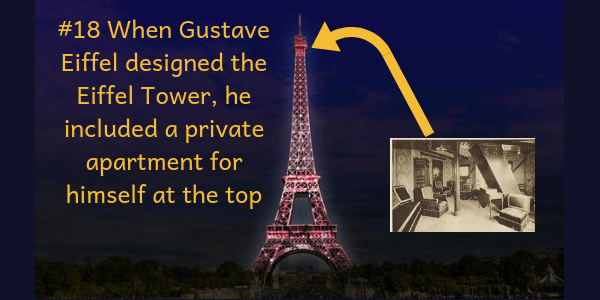 The Eiffel Tower is one of the most iconic and well-known structures in the world. It is located on the Champ de Mars in Paris, France and is known as La Tour Eiffel in French. Named after its builder Gustave Eiffel, it represents one of the Europe’s most pivotal moments in history. Its construction in 2 years, 2 months and 5 days was a demonstration of excellent French Engineering. Let’s go through some Eiffel tower facts you will be surprised to know.

The Eiffel Tower was originally built as the entrance arch for the “Exposition Universelle” World’s Fair in 1889. The fair was held to celebrate the 100th anniversary of the French revolution. The tower was never intended to be permanent. 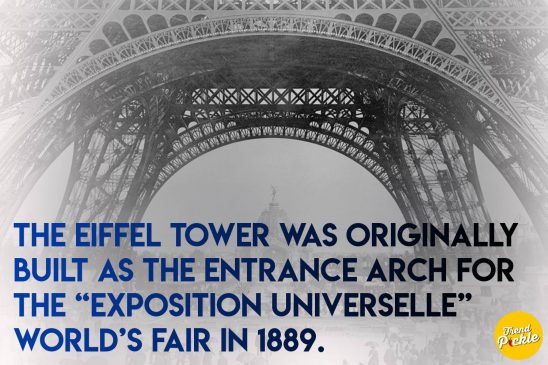 2. The Eiffel Tower was named after its builder

Although the Eiffel Tower is named after Gustave Eiffel whose company Compagnie des Établissements Eiffel was in charge of the project, Eiffel himself had very less involvement in the designing and building of the tower. It was actually done by his two senior engineers, Maurice Koechlin and Émile Nouguier. 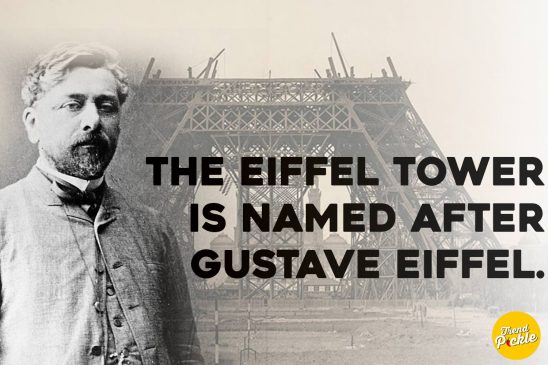 3. The Eiffel Tower was built in the year when Hitler was born 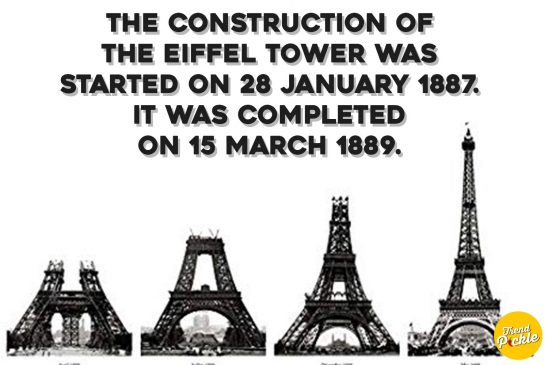 4. The Eiffel Tower was supposed to get demolished in 1909

The Eiffel tower was not supposed to be a permanent structure and only had permit to stand for 20 years. It was to be demolished in 1909 when its ownership changed to the City of Paris. However, it provided a giant radio antenna and hence was allowed to stand even after the permit’s expiration. 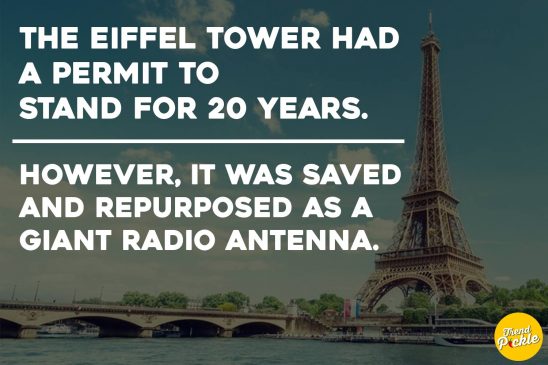 The Eiffel Tower is 324 meters (1063 feet) in height and it was the tallest man-made structure in the world for 41 years until the Chrysler Building in New York was completed in 1930.   If we don’t include the broadcast antennas at the top, it would be 984 feet tall. 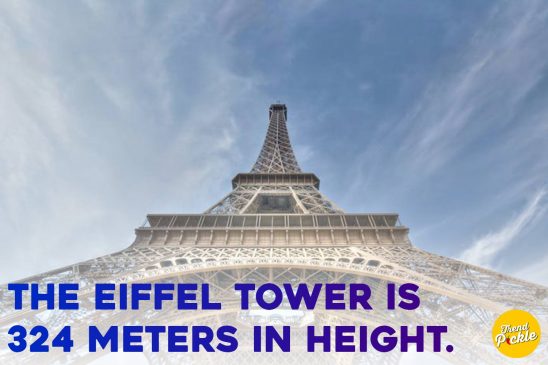 There are 1,665 steps to climb to the top of the Eiffel tower and people are only allowed to go up to the second floor by foot. Most people take the lift as even going upto the first floor takes around half an hour. 7. The Eiffel Tower is the most visited paid monument in the world.

Around 7 million people visit the Eiffel Tower every year. It has been visited by more than 250 million visitors since its opening. 8. The Eiffel Tower’s lift cables were cut during WW2

In June of 1940, the Nazis entered the streets of Paris. As a result the cables to the lift of the Eiffel Tower were severed so that Hitler would need to climb the steps to reach the top of the tower. In 1944, Hitler ordered General Dietrich von Choltitz, the military governor of Paris, to demolish the tower along with the rest of the city. However, General did not follow the order. The lift was finally repaired in the year 1946. 9. The Eiffel Tower was sold twice by a con artist 10. It is banned to take photographs of the Eiffel when illuminated

There are 20k flashing light bulbs on the Eiffel tower which give its sparkling appearance in the night. The Eiffel Tower is not fully illuminated all the time. Also it is banned to take any photographs of the tower when it is illuminated without taking permission from the Société Nouvelle d’Exploitation de la Tour Eiffel. Since 2013, it started shutting off the lights from 1AM-7AM to conserve power.

11. During summer the Eiffel Tower grows in height 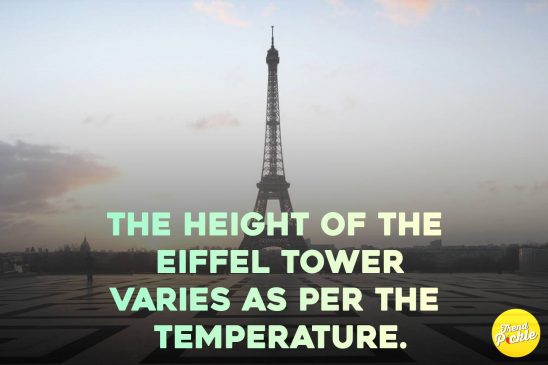 12. Inventor Franz Reichelt killed himself when trying to test his design for a parachute.

Franz Reichelt died while jumping from the Eiffel tower. He was testing a wearable parachute of his own design. 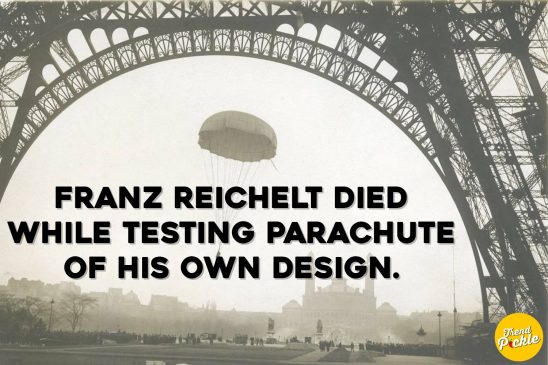 13. The Eiffel Tower is married

An American women Erika Eiffel married the Eiffel tower in a ceremony in 2007. She describes herself as “objectum sexual” and said her heart was stolen by the Tower’s beauty. 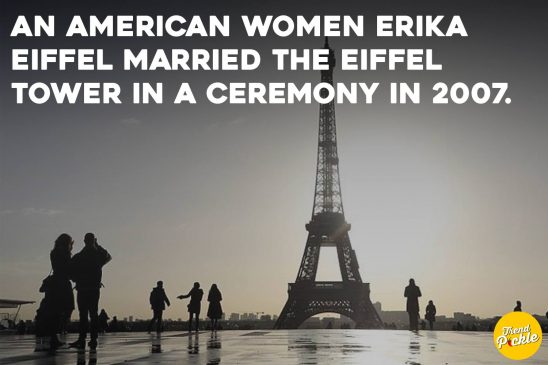 14. The Eiffel Tower was originally supposed to be in Barcelona

The Eiffel Tower was initially proposed to the city of Barcelona, Spain but they rejected the project. Today the Eiffel Tower is worth around $545 billion which certainly would have been an advantage for Spain had they accepted the proposal. 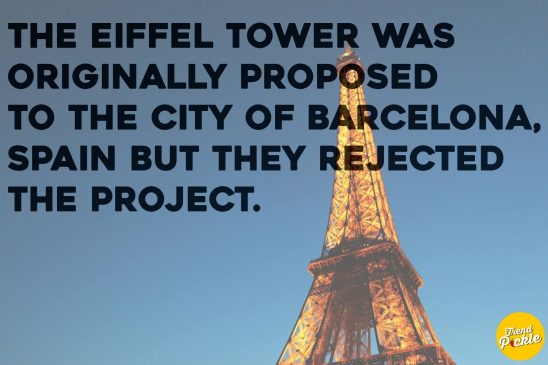 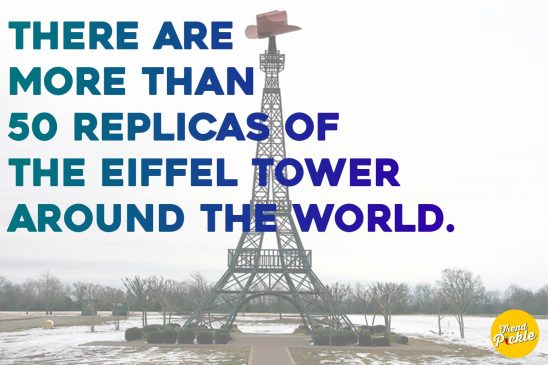 16. The paint alone on Eiffel Tower weighs around 10 elephants

The Eiffel Tower is painted every 7 years to protect it from rust and oxidation and has been painted around 18 times since its opening. Around 50-60 tons of paint are added every time, it is painted. The paint on the Eiffel Tower weighs as much as 10 elephants. 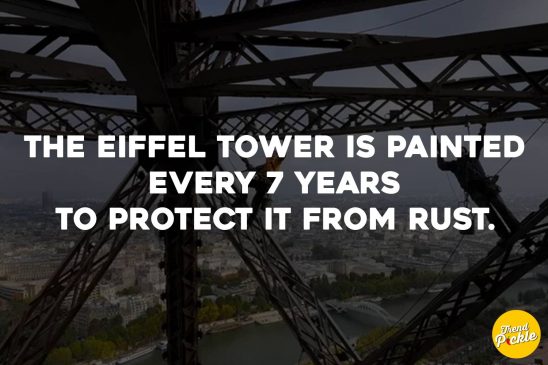 17. Gustave Eiffel built a room for himself in the Eiffel Tower

Gustave Eiffel had designed a private apartment for himself at the top of the Eiffel tower.  The secret room is located on the third level of the Eiffel tower. Today it is open to public but when Gustave was alive nobody was allowed entry without his invitation. One of the most famous personalities invited by Gustave was Thomas Edison. Gustave Eiffel also contributed to the design of the Statue of Liberty. 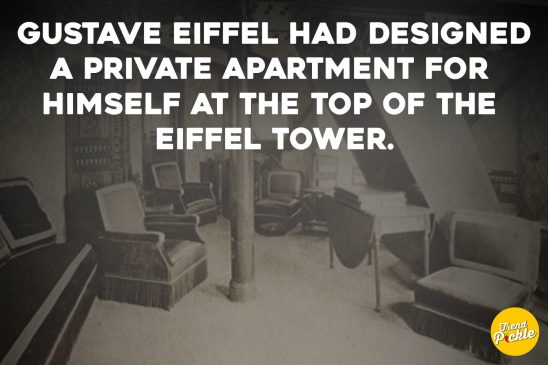 18. The Eiffel Tower almost got moved to Canada

There was a plan to relocate The Eiffel Tower in 1967. The idea of bringing the Eiffel tower to Montreal, Canada for expo 67 was followed seriously. Many studies were conducted to check the feasibility of dismantling the tower. However, the owners of the tower vetoed against it and the whole idea was scrapped. 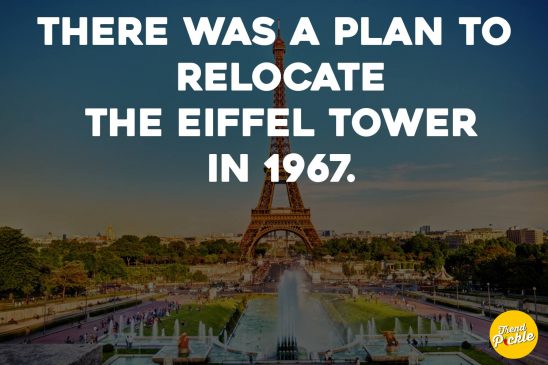 19. The Eiffel Tower is a major attraction for lightning strikes

The Eiffel Tower gets struck by bolts of lightning around 10 times a year, according to Meteo France. In 1902, a lightning strike damaged the top portion of the Eiffel Tower which was later repaired. 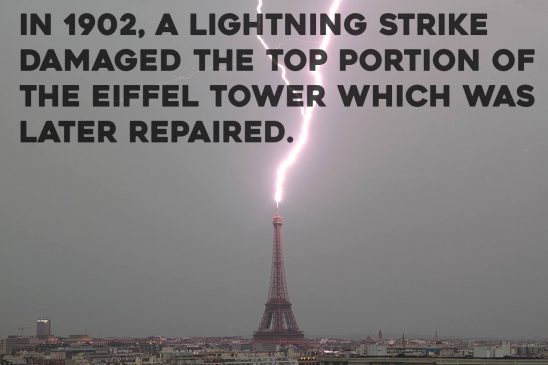 20. The Eiffel Tower has had its fair share of critics over the years

Guy de Maupassant, a French writer did not like the Eiffel tower. He used to call it a useless and monstrous structure. He used to eat his lunch at the tower’s restaurant because this was the only place he did not have to look at the tower. 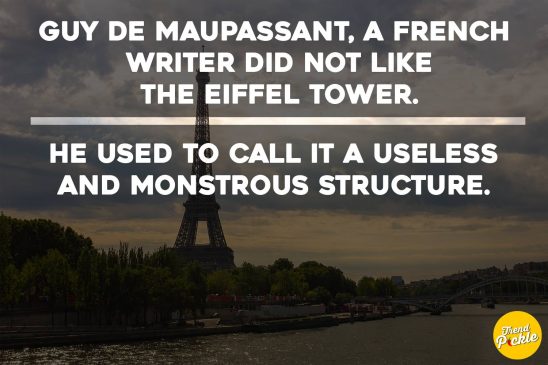 21. Building the Eiffel Tower was not an easy feat

The construction of the Eiffel Tower cost about $1.5 million. It took around 300 workers to assemble the 18,038 pieces of wrought iron and 2.5 million rivets. If the Eiffel tower is to be built now, it would cost around $39 million as per inflation calculator. 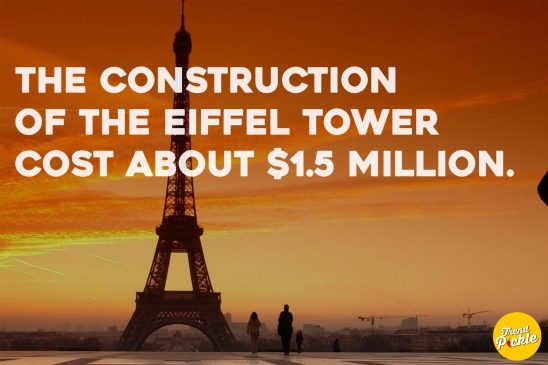 22. The Eiffel Tower has a ride to drop you at the bottom from the top

In 1891, French Inventor Carron planned a ride that would drop passengers in a device from the top of the Eiffel tower to the pond at the bottom. 23. The Eiffel Tower witnessed the winning of the Deutsch de la Meurthe prize

Alberto Santos-Dumont was a Brazilian inventor who designed, built and flew hot air balloons. On 19 October 1901, he circumnavigated the Eiffel tower and won the Deutsch de la Meurthe prize. His flight took off from Saint-Cloud, rounded the Eiffel tower and returned to the same point in less than 30 minutes.

That’s two and a half times the circumference of the Earth. As the most visited paid-for monument in the world, it is extremely busy all year round. On the Eiffel Tower, two of the original lifts are still in use today. They are carefully preserved. The lifts of the tower undergo constant maintenance due to heavy use.

25. The Eiffel Tower played an important role during WW1

This tower played a vital role in the 1914 Battle of Marne as a wireless telegraph transmitter, thus allowing the Allies to turn the tide of battle in their favor. The tower also served as a listening station to German transmissions over the next five years, as well as a way to dispatch emergency reinforcements.

Do you know any fun facts about the Eiffel tower? Let us know in the comment section.

Thanks Abhishek for your kind words, Please subscribe to our newsletter for more such posts.

With all these facts in hand, i’lol have to go visit the Eiffel Tower.

Interesting! I would for sure be taking the lift vs climbing those stairs!

Really interesting facts! I love the old pictures. Especially the lightning one. I can’t believe lightning hits it so often! And I would totally take the lift rather than walk 1600 steps!

Thanks Serena. Please subscribe to our newsletter for more such posts.

Before going to Paris, I thought that the Eiffel Tower was overrated. But I was so wrong! I understand the hype, the tower is stunning and truly charming. I enjoyed reading your facts!