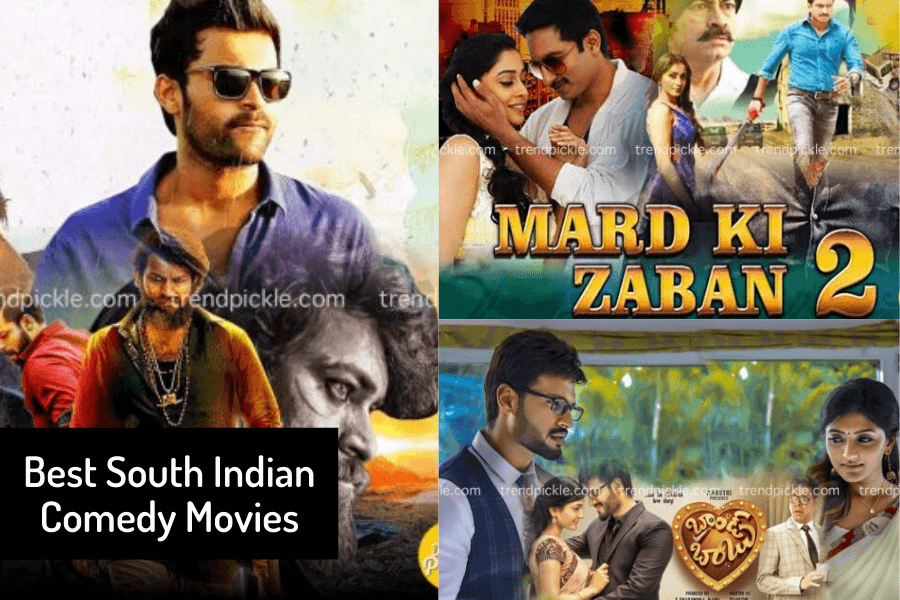 Actors like Allu Arjun, Joseph Vijay, and Ram Charan not only make us swoon but make us laugh so hard that we suffer from stomach aches! And legendary actors Rajnikanth and Brahamanandam Kanneganti have a special place in our hearts when it comes to comedy. South Indian Movies has always been known as masala entertainers, but now they are even creating good niche movies, be it comedy or action movies. If you are a fan of comedy movies, here is a list of the best South Indian comedy Movies for you to enjoy in 2022 and the best part is you can watch most of these South Indian Movies on YouTube for free.

Plot: Diamond Babu, the son of a wealthy entrepreneur obsessed with brands, is just like his father. His life revolves around extravagance and the high life. As part of his attempt to woo the daughter of the home minister, he unknowingly woos Radha, their maid. They might have a difficult time establishing a relationship due to their vastly different lifestyles.

Plot: The movie begins with Bhanu, a strong outspoken Telugu girl who loves everything Indian. Her supposed to get married to an NRI boy and Bhanu finds the need to go to America very funny. Enters Varun, an NRI medical doctor who is the NRI boy that Bhanu’s sister is supposed to marry. Both of them fight over the concept of marriage, whose sibling is better, and the age-old debate between India and America. Come, explore their funny, cat and mouse love story. It is one of the best South Indian movies of 2019, widely claimed by the critics.

Plot: The story revolves around a teenager who thinks that his missing father is dead, so he attempts to retrieve money owed to his father by a Malaysian crime boss. The film has collected $1,018,120 at the overseas box office. The film ran for 150 days at the box office even though being declared an average fare in returns domestically.

Plot: Seenu, the film’s other leading character, has a love interest named Sailaja. Mard Ki Zaban 2 follows the story of Sailaja. Sailaja is abducted by Seenu’s outlaw father who wants to see his daughter marry the son of the Chief Minister, kicking off the plot of the film, which is essentially a love/revenge/drama story.

Plot: An elderly real estate dealer, Rangappa owns a complex. His properties are well managed, and he is quite successful after selling a few shops. Karthik, 24, is an orphan who with his three friends runs the garage owned by Appaiah Bond, an old hunk obsessed with car races. There is a legal dispute between Rangappa and Appaiah. In the meantime, Rangappa’s daughter falls in love with Karthik. The story will keep you over the edge.

Plot: One day Rony meets an unexpected guest Chandy and they become very close. However, Chandy does not disclose his true identity. Over time Chandy discloses his identity and introduces his daughter Santa and a lot of unexpected events follow. Clearly, this is one of the best south Indian comedy Movies.

Plot: In a satirical comedy that explores the relationship of man with god. The story follows Gopala Rao, an atheist, who finds himself amid a crisis after an earthquake destroys his shop. However, after Govinda Hari visits him, his life miraculously changes. The film is the remake of the 2012 Bollywood movie, OMG – Oh my God!

Plot: A young man, who lives by the principle of helping those who have helped him, decides to assist a gangster who had saved his life. But his good deeds backfire when the gangster decides to kill him.

Plot: The film is partly inspired by the Bollywood film Golmaal 3. This movie and Golmaal 3 have many similarities such as story and direction, many reviewers said: “It’s imprinted Golmaal 3 and it’s an unofficial remake”. It is one of the best south Indian comedy movies of all time.

Plot: People from small towns arrive to the city with a dream; earn some money and change their lives. Four youngsters arrive in a big city and their stories collide as well as their relationships. Everything that was going wrong before the youngsters met each other starts to make sense. Go dive into their stories and find yourself!

Plot: The movie teaches us about the importance of hard work and that there are no shortcuts to success. Ravindra Narayan believes in making quick money and does not want to work hard like his father. He meets Bittu who is a thug and plans to rob a bank. Ravi exposes his plans for which Bittu decides to take revenge. The movie takes a humorous angle on a man realizing the importance of hard work and deciding to expose the wrongdoing of the system.

Plot: The movie revolves around 2 brothers who are very different from one another. One follows rules and regulations while the other does things his way. This movie marks the first-ever collaboration between Allu Arjun and Shruti Hassan. The movie shows us that a brother will go to prevent any harm coming to his other brother even if they both do not see eye to eye. Lucky is more reckless than his brother Ram who is the Assistant Commissioner of Police and very disciplined. Ram is motivated to prevent Shiva Reddy, a corrupt politician, from participating in elections. Lucky unknowingly gets the files that contain the wrongdoings of Shiva Reddy. Lucky threatens to expose those files, causing Shiva Reddy to put him and his family on the hit list. This causes a rift between the two brothers. Will this rift be solved? Will Shiva Reddy get exposed?