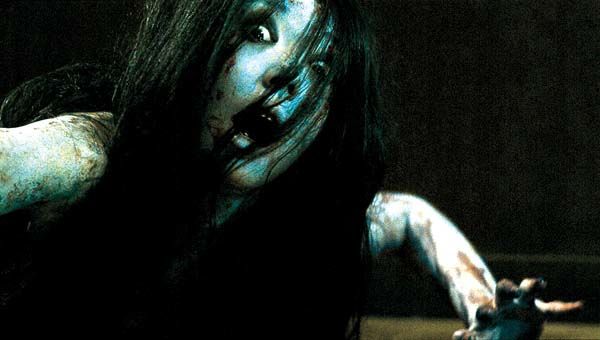 Directed by Takashi Shimizu, this movie is about a horrifying murder that leaves its mark on a house and even influences the successors of the house. Although the third movie in Ju On series, this was the first amongst the three that was released theatrically. This movie did so well that it was remade in America in 2004 and was named as ‘The Grudge’. This remake was also directed by Takashi Shimizu and it went on to receive the same popularity and fame the original movie got.

A creepy psychological movie that released in 1998, Ringu traces the story of a television reporter who is a single mother. The plot of this story basically is about how everyone that watches a VHS tape dies within a week. This movie also got an English Language remake in 2002, known as ‘Samara’. This is one of those fascinating movies that manage to haunt you even after you leave the theatres.

Written and directed by Sion Sono, Suicide Circle is a 2001 Japanese Horror film that explores a wave of suicides that suddenly hits Japan. Kuroda, a detective, is intrigued and sets out to solve the mystery behind these suicides. The film was appreciated for its complex plot comprising of gruesome scenes and gory presentation. The opening scene that ends with a horrifying mass suicide is still, one of the most iconic horror scenes in the Japanese movie industry.

Remade in Hollywood in 2005 with the same name, Dark Water traces the story of a woman named Yoshimi who is going through a divorce and is thus, compelled to move to a new apartment with her daughter. There is a leak in one of the ceilings that is worsening every day. And when Yoshimi gets help from no one, she goes to the apartment upstairs only to find it locked. A series of strange things start happening and when finally her daughter goes missing, making things even scarier.

Also known as Pulse, Kairo is a horror film directed by Kiyoshi Kurosawa in 2001. This film explores two storylines where vicious spirits can enter our world through the internet. Although presenting a very unique story, this movie managed to gain both commercial and critical acclaim. The movie was later also remade in Hollywood in 2006.

Based on a novel by Ryu Murakami, Audition is a horror film released in 1999. It explores the life of Shigharu, who is a lonely widower. His son thinks that Shigharu should find a new love. So, Shigharu stages a fake audition in order to find a new wife. Things go as planned as Shigharu finds Asami and falls in love with her. But soon, you realize Asami has other intentions. Directed by Takashi Miike, this movie is seriously disturbing and a treat for all the hardcore horror movie lovers.

Another brilliant horror movie by Takashi Miike, ‘One Missed Call’ is an adaptation of a novel by Yasushi Akimoto. People start receiving voice messages from themselves from a future date. Basically, it’s their future selves sending them voice messages. What’s even scarier is that these messages contain exact details like the date and time when they will die. This movie was a major box office success in Japan and managed to gain the appreciation of a lot of critics as well.

An anthology of four Japanese folk tales with supernatural themes, Kwaidan was released way back in 1964.  ‘Black Hair’, ‘The Woman in the Snow’, ‘Hoichi the Earless’  and ‘In a Cup of Tea” are the stories that are presented in this film. After getting a lot of critical acclamation, this movie also went on to bag an academy award nomination. With gripping storylines and realistic characters, this is surely one of the best horror anthology films ever made.

Set in Feudal Japan, this movie traces the story of two women that kill Samurais and steal their belongings. Directed by Kaneto Shindo, this movie talks about survival and how the two women sell the killed Samurais’ armor in order to earn their livelihood. And while all is going well, one of the women gets romantically involved with a man. This threatens the other woman and so she dons a demonic mask in order to scare the other woman. Released in 1964, this is surely one of the great horror movies made in Japan.

This 1977 cult classic that has been a favorite amongst fans for many years now, had actually failed terribly at the box office. However, with time, it has managed to gain a cult status and fans have appreciated the film’s stylized looks. The film traces the story of a girl who visits her ill aunt’s house and also brings along six of her classmates. Once there, strange things start happening as the ‘house’ starts taking the girls one after another.

Interesting and added the list – Thank you for nice info.

Thanks Devendra. Stay tuned with us for more such posts.