The outbreak of a newly emerging virus called “NIPAH VIRUS” is terrifying in India and especially the state of Kerala. There have been 10 deaths reported due to this deadly virus. What is the Nipah virus? Why is it considered to be “deadly”? How does it enter the human body? Is it the first time in India that Nipah virus has attacked so many lives? There are many such questions which strike our mind when we come across the word “Nipah virus”, come let’s try to demystify the mysterically deadly virus- NIPAH.

According to the World Health Organization,

Nipah is a newly emerging zoonosis that causes severe disease in both humans as well as animals. The natural hosts of the virus are the fruit bats of the bat family called-Pteropodidae of Pteropus genus.

The first outbreak of this killer virus was observed in Malaysia and Singapore in the year 1998 due to Pigs. While in Bangladesh the outbreak of this virus was due to the consumption of date palm sap contaminated by infected fruit bats. Well, Kerala is not the first state to be affected by the virus. West Bengal had had two outbreaks in the years 2001 and 2007 respectively causing 50 people to have lost their lives.

Nipah virus could affect both respiratory and neurological systems of the body. The incubation period of the infection is 4-14 days. The initial symptoms of the infection being-fever, sore throat, headache, vomiting, muscle pains, nausea, dizziness. In the recent cases, it has been observed that the lungs are being affected that is increasing breathlessness which may progress to severe oxygen hunger. It can also further progress to encephalitis (inflammation of brain) leading the patients to slip into coma. Encephalitis has the high rate of death, and those of who survive can have long-term effects like neurological disorder, convulsion or personality change.

How to Prevent Nipah virus?

This is considered to be deadly as there has been no vaccine to prevent this infection or any prescribed treatment. Prevention is the only way to go about and certainly, prevention is better than cure! Here are some measures of prevention- 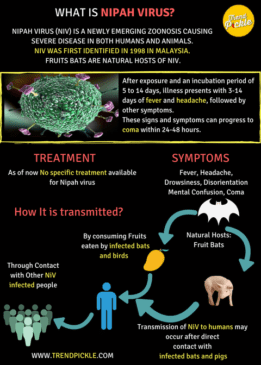 1. Do not drink date palm saps or fallen fruits as they could be contaminated by the infected fruit bats.

2. Make sure you wash the fruits thoroughly before you eat them.

3. Avoid consuming Pig meat or any direct contact with pigs.

5. Wash your hands as and when you visit public places and before eating.

6. Healthcare namely, doctors and nurses or other hospital workers and those taking care of infected people should wear face masks and protective gear gowns.

7. Do not share restrooms, utensils or clothes shared by infected persons.

8.If in the vicinity of dead body (in case of death due to Nipah virus)cover your face with face mask.

It is true that there is no vaccine or treatment as of now for this infection and there is an urgency for one such discovery but, in the scientifically advanced day and age where almost all sicknesses can be treated, I hope that their will soon be a discovery and a way to tackle this deadly virus.

Here is the full schedule of FIFA WORLD CUP 2018

Why use free dating websites to find singles near you?