Ramayan – He is the foster father of Mandodari, wife of Lanka’s king Ravan. He used to live in his capital Maya-Rashtra.

Mahabharat  – He appears in Mahabharat too. He used to stay in the area of Khandavprastha along with his family, friends and his snake friend Takshak. After the partition of Hastinapur, Pandavas came to Khandavprastha and Arjun burnt the entire forest. Therefore, Takshak escaped and Mayasur surrendered to Lord Krishna. On the request of Krishna, Mayasura built a grand palace for Pandavas. He also gifted a mace to Bhima. Ramayan – Lord Ram and Seeta meet Bharadwaja at his ashram at the start of their 14 years of exile. Bharadwaja requests them to stay with him for the entire exile but Rama politely declines and decides to go into forests. Therefore, Bharadwaja appears in many instances in the Ramayana.

Mahabharat  – He is the father of Drona, a royal teacher to the Kauravas and Pandavas. Drona was not born from a womb, rather he was born from a vessel made of the leaf. The story of Drona’s birth is quite interesting. Once Bharadwaja went to Ganga river with his companions. The beauty of a beautiful apsara who had come to bath there impress the sage. He could not control his desires, causing him to ejaculate out of excitement. He preserved the semen in a vessel and thus Dronacharya was born from that vessel. 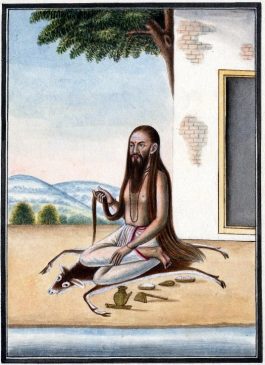 Ramayana – Known as the lord of wealth, Kubera is the half-brother of Ravana. As per scriptures, Kubera once ruled Lanka, but Ravana removed his half-brother from the throne and became the king of Lanka. Kubera later settled in the city of Alaka in the Himalayas. Bhima who has the power of thousand elephants could not move the tail of Hanuman.

Mahabharat  – Kubera is the son of Prajapati Pulastya and his wife Idavida and the brother of sage Vishrava. Kubera is described as born from a cow. He is one of the Chiranjeevi in Hinduism who live till the end of Kaliyuga.

Ramayana  – An ardent devotee of Lord Ram, Hanuman meets Lord Ram and Lakshman during their exile. Hanuman helps Ram to find his wife Sita who is abducted by a demon Ravan. Hanuman is one of the main characters in epic Ramayana.

Mahabharat  – He is the half-brother of Bhima as they share same spiritual father Vayu Dev. Hanuman meets Bhima accidentally when Bhima was on his way to Mount Kailash. Therefore Bhima realizes the strength of Hanuman. Lord Hanuman was also riding the chariot of Arjun when Lord Krishna was giving teachings to Arjun. He is the only Vishnu Avatar who never dies and still living in Mahendra mountain as per Bhagavata Purana.

Ramayana – Parshuram is one of the Lord Vishnu’s 10 avatars on Earth. He appears during Swayamvar of Sita where Rama breaks the Parashuram’s bow. Parshuram is angry and he calms down only when Rama apologizes to him.

Mahabharat  – Appearing in several chapters of Mahabharata, He plays important roles in the Mahabharata too. Serving as a mentor to Bhishma, Drona and Karna, He teaches weapon arts and helps key warriors in both sides of the Kurukshetra war. He is only Vishnu avatar who has coexisted with other Vishnu Avatars. He co-existed with Rama in Ramayana and co-existed with Krishna in Mahabharat. He is also one of the immortals in Hinduism who never dies.

Ramayana – He is the younger brother of Lanka’ king Ravan. Being a devotee of Lord Ram, he helped Ram and his army against his brother Ravan. After Ravan was killed by Ram, Rama crowned Vibhishana as the king of Lanka. When Rama was about to leave Ayodhya at the end of his reign, He ordered Vibhishana to stay on earth forever and serve the people and guide them to the path of truth and Dharma.

Mahabharat  – Vibhishana is still the king of Lanka. According to the Mahabharata, Sahadeva, one of the Pandavas visited Lanka during his southern military campaign for the rajasuya of Yudhishthira. When Sahadeva visits Lanka, Vibhishana was ruling over Lanka. 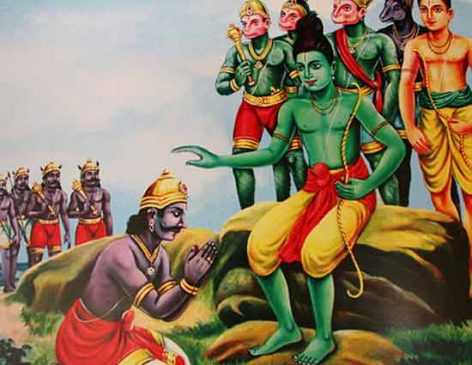 Ramayana – Mentioned in the several chapters of Hindu epic Ramayana, Agastya Rishi lives on the banks of river Godavari in his ashram. Agastya and his wife meet Rama, Sita and Lakshmana before the war with Ravana. He gives them a divine bow and arrow and describes the evil nature of Ravana.

Mahabharat  – The story of Agastya is also present in Mahabharat. He stops the Vindhya mountains from growing and lowers them so that  Sun, Moon and living beings could easily pass over it. Most of the Sage Agastya’s stories are common in Ramayana and Mahabharata.

Also Read -   8 Temples in India where men are not allowed!

He was the son of Sage Vasistha, one of the Saptarishis of India.

Ramayana – Guru Vasistha is the teacher of Lord Ram and Lakshman. Rishi Vasistha was married to Arundhati and they had a son Shakti.

Mahabharat  – Mahabharat mentions Shakti as the father of Parasara who was the author of Vishnu Puran and Father of Vyas. 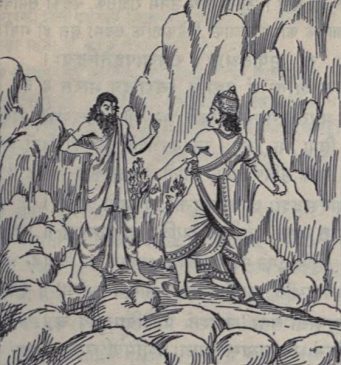 Known for his short temper, Durvasa was the son of Atri and Anasuya. He was born out of Lord Shiva’s anger and thus had a very short-tempered nature.

Ramayan  – He visits Ayodhya and asks to meet Rama when Rama was having a discussion with Yama, the lord of death. Lakshman was guarding the door and he politely declines but Durvasa gets angry and threatens to curse all of Ayodhya. Lakshman informs Ram and he concludes the meeting with Yama to meet Durvasa. As Rama had promised Yama that if someone interrupts their meeting, that person will be executed. To fulfil his promise, Rama asks Lakshman to leave him forever as that will be considered as death. Lakshman goes to the banks of river Saryu and leaves the world through the river.

Mahabharata – Epic Mahabharata describes Durvasa as a sage who grants boons easily if someone pleases him. Once Durvasa visited Kuntibhoja, the father of Kunti and asked for his hospitality. Kuntibhoja delegated the responsibility to Kunti to take care of Durvasa. Kunti fulfilled all the requests of Durvasa patiently. Therefore, Durvasa was very pleased with Kunti and taught her Atharvaveda Mantras. These Mantras enabled Kunti to bear 3 eldest Pandavas. 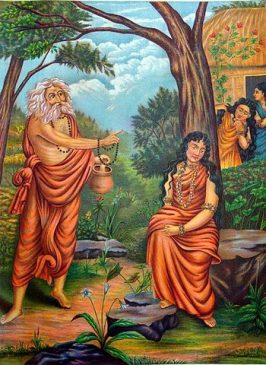 Ramayan – He is the part of Ram’s Vanara army. Jambavantha helps Hanuman realize his immense strength and power which Hanuman had forgotten due to a curse. He encourages Hanuman to fly across the ocean to find Sita.

Mahabharata – He is the father-in-law of Lord Krishna and The whole Mahabharata story is really interesting. Jambavantha had killed a lion, who had acquired a gem called Syamantaka from Prasena after killing him. Krishna was suspected of killing Prasena for the gem, so he tracked Prasena’s steps until he tracked Jambavantha to his cave. Therefore a battle between Krishna and Jambavan ensued for about 3-4 weeks. When Jambavan began to feel tired, he realized who Krishna was Jambavantha surrender and gave the gem to Krishna. He also presented Him his daughter Jambavati, who became one of Krishna’s wives. Do you know more such interesting facts about Indian epics Ramayana and Mahabharat, let us know in the comments section?

Lord Hanuman kept it back at Himalayas