At first glance, Greek and Indian mythology seems to have nothing in common. They are both very distant land, with very different culture and people who have very different moral and social values. But if we dig enough, we can find some strange similarities between the two vastly different beliefs.

While most modern religions believes just one God to be the creator and maintainer of the vast universe, both Hindu and Greek mythology believes that there must be more than one. From the Tridevs to Indra, Varun, Agni, and even saraswati and Lakhsmi and all the other devtas from Hindu mythology and Zeus, Hera, Poseidon, Hades from Greek mythology, we can see how both includes a lot of Gods, and how both includes women as equal and sometimes even stronger ruling authorities.

Both are the rulers of all other Gods as well as of sky and heaven and has weapon that possess the power to summon rain, thunderbolts and lightning. Both live in heaven from where they rule the others. They both despite having wives are not always very faithful to them and has numerous affairs causing their wives jealousy. 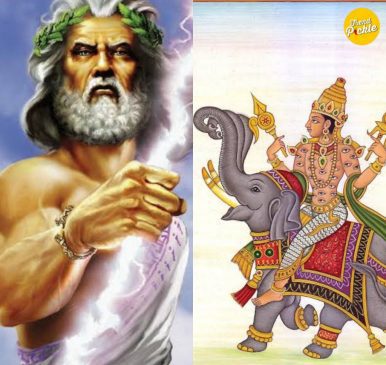 Both of them possess the power to control water. Varun is the God of seas, river and aquatic life and Poseidon is also the God of seas, river and horses. They both have parents that also gave birth to many other notable Gods of their respective mythologies. Also interestingly both Poseidon and Varun means the planet Neptune in their respective languages. 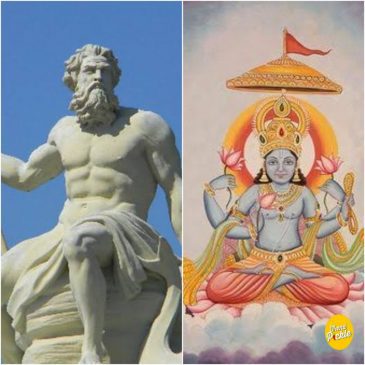 Yamraj is the Hindu ruler of Narak, the Indian uptake of the underworld where the lost soles gets tortured until due time. Hades also rules the hell or underworld , the Greek version of bad people torture chamber. While both Hades and Yamraj seems to be scary and cruel , in reality they are both misunderstood characters that carries out the duty assigned to them. While Hades is a bit mischievous in nature, both are essentially good at heart 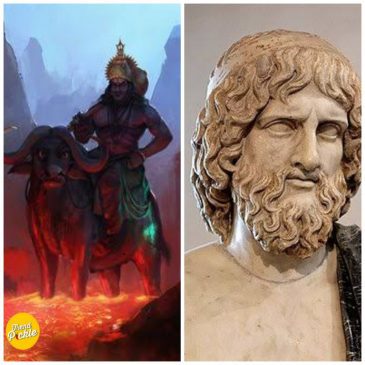 Both were demigods of half God half human, with a seemingly impenetrable suit of armor and one of the best warriors of their times. Moreover both of their mothers asked them before the wars not to participate, but they did anyway and eventually their death was one of the main reasons that concluded the war. 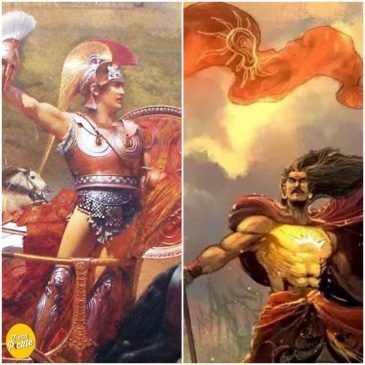 Love might just be an emotion occurring naturally to human, but both Hindu and mythology believed this phenomena to occur due to the work of some mischievous Gods. Both Cupid and Kamdev carries a bow around and shoots their victims with arrows after which the person that were shot fells in love. 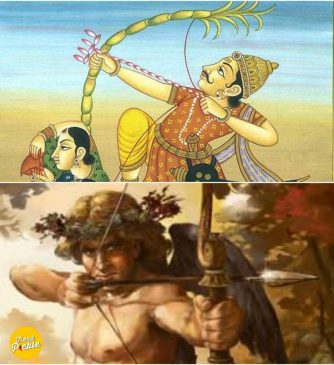 Both of these great wars happened because of love. Trojan war happened because Helen in order to bring her back, and the war between RAM and Ravana took place because Ravana kidnapped Ram’s beloved wife Sita.

The saying, flying too close to the sun comes from the myth of Icarus. He along with his father made a pair of wings and flew up in the sky, but got too overconfident and flew up to the sun which caused his wings to melt down and him falling to his death. In Indian mythology we have Sampati. Although Sampati did it just to save Jatayu, he too flew too close to the sun, got his wings burned and fell to the ground. 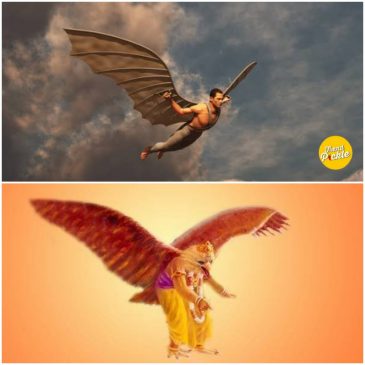 We can see that both mythologies imagines their Gods as very humane beings, not perfect. Their Gods made mistakes, were vengencefull and got hurt just like us humans. Both the cultures also included women as their Gods as they realized no creation is possible without the nurturing hands of the female Gods. This shows how similar the ways of thinking of men from such different cultures are.

Best Air Conditioners you can buy this summer!

How Can Technology Be The Gateway To Better Financial Education?

Story of Rudraksh : The Jwels of Shiva