Pune, with its rich cultural heritage, is the cultural capital of Maharashtra. There are many historical monuments, forts, and temples in and around Pune. There are lots of old temples in Pune which one must visit. If you are looking for temples within 100km of Pune  this article is for you. We have compiled some of the best ancient Hindu Temples around Pune.

Start packing your bags and get ready for short day trips in the city.

You will be amazed to see this old Shiva temple right in the middle of the Pune town situated on Junglee Maharaj road nearby Junglee Maharaj temple. The Pataleshwar Cave Temple is a rock-cut cave temple dedicated to Lord Shiva. The temple was built in the 8th century during the  Rashtrakuta period. It is located in what is now Pune. This temple was originally situated outside Pune town but now that the city limits have increased the temple comes under the downtown on Jangli Maharaj Road. The Pataleshwar cave have been declared as a protected monument by the Government of India. This place is very relaxing and calming and a must visit place for all Shiva devotees as well as historical monuments lovers. Parvati Hill is a hillock in Pune, India. The hillock rises to 2,100 feet (640 m) above sea level.  Atop the hillock is the Parvati Temple, one of the most scenic locations in Pune. The temple was built during the rule of the Peshwa dynasty. The Parvati temple is the oldest heritage structure in Pune.  Parvati hill is also an observation point that offers a panoramic view of Pune city since it is the second highest point in Pune after Vetal Hill. The hill has 103 steps leading to the top where the temple is situated. The temple also has a museum adjacent to it, dedicated to Peshwa.  The main temple, Devdeveshwara, is made of black stone. It was completed under Balaji Baji Rao, in 1749.  The other temples are dedicated to Vitthal and Rukmini, Vishnu, and Kartikeya. This place is ideal for a half day trekking trip. 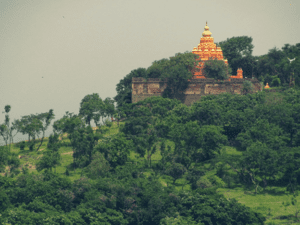 This temple is situated near the famous Dagadusheth Halwai Ganapati Temple and is one of the oldest temples of Lord Ganapati in Pune. The Kasba Ganapati refers to a particular idol of the god Ganpati in Pune thus the temple dedicated to Kasba Ganapati is known as Kasba Ganpati temple. The Kasba Ganapati is the presiding deity or gramadevata of Pune.  Dadoji Konddeo told Jijabai that an idol of Ganapati had been found in Pune. Jijabai, mother of Chhatrapati Shivaji Maharaj established the idol and commissioned the temple.  The idol’s status was decided as the premier idol in Pune by Lokmanya Tilak. Morya Gosavi Ganpati Mandir is located in Pimpri-Chinchwad. This is a very calm and peaceful temple with lots of idols of Lord Ganesha placed all around the temple. The temple is a very simple structure and  has temples dedicated to Lord Ganesha and also houses the Samadhi of Morya Gosavi.  Morya Gosavi was a prominent Hindu saint and the most famous devotee of Lord Ganesha. Images of Morya Gosavi are also seen  displayed in the temple. The other shrines in the temple are those of all the Devas in the lineage of Morya. All of these temples are simple plain square structures and have shrines inside that are in the shape of an octagon. This temple is situated in Someshwarwadi area of Pashan Pune. This is again a very old and  beautiful Lord temple of Lord Shiva. This well maintained  temple will surely bring on a relaxed feeling to anyone visiting it.  There is a village museum located next to the temple where one can have the feel of a village life. The main attraction of the temple are the  mini replicas of all  the 7 Jyotirlingas of Lord Shiva. It is said that Chhatrapati Shivaji Maharaj offered prayers with Mata Jijabai here. 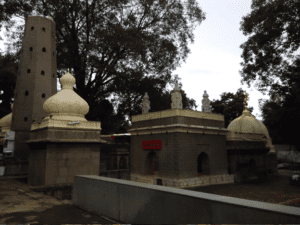 The Nageshwar Temple dates back  to the 13th century, the times of Sant Dnyaneshwar.  Its renovation was however done in the 18th century (1730). This temple is in Nagesh Peth then known as Nahal Peth, but later took the name of the temple dedicated to Lord Nageshwar (Lord Shiva). The temple is very old and has not been maintained properly. This beautiful hilltop temple is on the way to Talegaon on the Pune-Mumbai highway. If you want to take a break for a day or half, this place is suitable for you. It is situated at Gorawadi village which is just before the toll plaza of old Pune Mumbai road. You can park two-wheeler/four-wheeler in the basement of the hill and take the steps leading to the top. It might take about 30 minutes to reach the top. The stairs are also not in very good condition. After finishing around 300 steps, you reach the flat portion of the mountain and from there, there  is a normal road to go to the caves. On the top, there are caves carved on big rocks. Inside these caves, there are several temples beautifully  carved out of the rocks. There is also a Shiva Ling crafted from the same rock. The  panoramic view from the top of the temple is breathtaking , also  enabling one to see upto the MCA stadium. 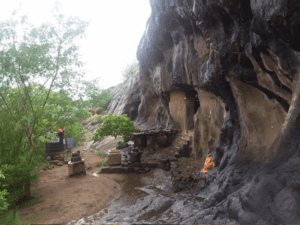 Which are the best places to visit near pune according to you. Let us know in the comment section.

Also Read -   20 Most Evil Men That the World Has Ever Seen!
Powered by Inline Related Posts
previous post

7 Things Parents Should Do To Improve Child’s School Education