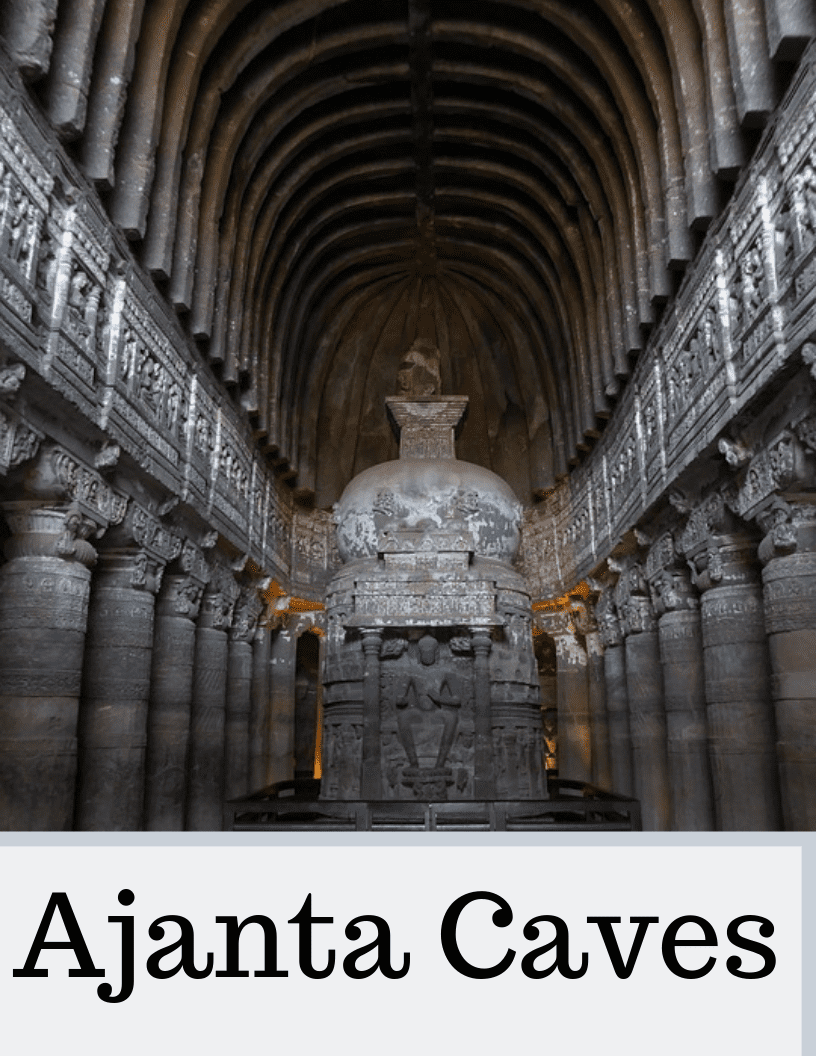 Any site declared at a World Heritage Site by UNESCO becomes a popular tourist destination for many, but do we actually know what the site holds beyond those chitter chatter of tourism? Ajanta caves is one such site, though mostly regarded as a piece of architecture the caves have more than artwork. It leads to make many speculations about Indian culture that existed before us and opens our minds to thinking beyond what is just a mere painting.

Overlooking the Waghur (tiger) River the Ajanta Caves have been excavated in the shape of a horseshoe cut out of rock surface that is almost 76 meters high. The caves located just outside the village of Ajintha in Aunrangabad District in the Indian state of Maharashtra have been a UNESCO World Heritage Site since 1983 and is attraction to hundreds of tourists from all parts of the world. There are about 30 caves that contain 600 years old carvings and they have increased the interest of those who love art and history. These caves depict the life of man in stone art done only by the means of a hammer and a chisel and the beliefs of Buddhism.

Going down the history lane we find that, the Ajanta caves were built during 100 BC by monks and artists of then times and were discovered by British officer John Smith belonging to the Madras Presidency very recently in the 19th century. It is believed that the earlier caves were carved during the time of Satavahana dynasty that would be 100 BC and the later ones were carved between 5th to 7th century. It is also widely believed that the monks who had initially come her for peace and tranquillity abandoned the caves and left. Some argue they left due the persecution against the Buddhist community that was taking place at that time however, this cannot be held entirely true.

Discussing the Architecture of these caves, the stone carvings found in them are regarded as a work of a master in India. The walls and paintings are regarded as the highest form of craftsmanship. The great image of Buddha in cave 1 is seen as a masterpiece and the cave has other elegant motifs along with paintings of Vajrapani, Bodhisattvas, dancing people etc. Depicting mythology and lifestyle of ancient times, in the caves you shall find exquisite carvings done out of mountain rock depicting temples of Buddha and have mystical figures of the Lord and others. There are also stupas and dwelling cells known as viharas. The stone carvings share a great influence from the Jataka tales and Buddhism.

Each and every depicts something and does so in a grand manner. The murals that have been found here in the caves are in the style of tempera and the painting done is use of glue, dried lime wash and plaster. The colours that have been used are red, black, lapis lazuli and the terra verte which are naturally available in the rocks. You will even find the sculptures to have been properly painted but as the time has passed the paintings have washed away.

Going into purpose of the caves we find that there could have been reasons behind the creation of these caves. These caves have not occurred naturally but are rock-cut caves. Being the splendid examples of architecture cut into a mountain cliff by human hands some caves among these were intended to be residences of Buddhist monks where as some were Buddha temples. Now it’s also important to note that these caves were not limited to the Buddhist sect only instead it was pilgrimage site for lay devotees as well.

Now, these caves are not mere tourist attraction places, but they give a lot of insight into earlier periods of life as well and hence become of great importance. They not only give an insight into Buddhism and its teachings but also tell us about the societal structure of the time when these caves were being made or painted at least. The Varjrapani (with Thunderbolt) and Padmapani (with Lotus) are a few renowned paintings which can be located in cave number 1. Adding to this, a variety of skin colours like brown, yellow, yellowish brown can be observed which probably highlights how different races existed within the population. The dress, jewellery and the way in which the social relations are depicted showcase the lifestyle of the elite and royalty giving a glimpse of life in India around 1st

Advertisement
millennium CE. Artworks in Ajanta also provide a life of contrast between the spiritual life if monks and those who lives the materialistic life without renunciation of pleasures. These artworks help us build an image about the ancient and early medieval Indian cultures particularly around the period of Gupta Empire.

Paintings in Ajanta do not only help us create a social structure about early India, but they also help us gain an economic perspective about the then times particularly referring to Indian interactions with foreign cultures. In cave number 1 there are several frescos which have figures that have a foreign face and dress. Similarity can be drawn in paintings found cave number 17 as well. Such murals probably suggest that India was a multi-cultural society with India being active in international sphere or trade. They probably do also suggest that such trades were extremely important for this particular region where the caves are located and hence the artists decided to include them with enough precision. Paintings in Ajanta caves also show existence of a variety of colourful and delicate textiles and also women making cotton. This probably goes to indicate that textile was one of the major exports to far way lands.

While scholars are generally single opined that these murals indicate trade and cultural connections that India had with foreign places their significance and interpretation definitely has scope to vary.

Ajanta caves are definitely a delight for a tourist, but they are unique in the sense that three elements of visual arts that is paintings, frescos and sculpture come together at one place. The fusion of these elements makes it a delight for lovers of art and architecture as well. A very unique of feature of depicting Buddha is making use of symbols such his footprints or his throne. Apart depicting the morals and values of life these caves also depict using Jataka tales’ incarnations of Buddha in previous lives. Overall, these caves, reflect the Buddhist art that was at a rise at the time of Chalukya and Rashtrakuta rulers. These paintings have also gone ahead and influenced paintings on Tibet and Sri Lanka. The have provided like a base or example for Indian artists to follow. Abanindranath Tagore and Syed Thajudeen used the Ajanta paintings as inspiration. Apart of influence on art, the caves tell us about the modes of Buddhist temple architecture and also other forms of architecture prevalent at that time.

The caves left to centuries of neglect and were accidently found by John Smith. With their growing popularity they become a priceless ground for treasure hunters. Then, Indian antiquarian, archaeologist and architectural historian James Fergusson took to study and preserve the Ajanta caves. He commissioned Major Robert Gill to reproduce the paintings and also numbered the caves. Many artists earlier tried to reconstruct or say reproduce the artwork present at Ajanta cave but none of them sustained due to some reason or other.

Though much of the caves have been damaged beyond repair and their interpretation is subject to debate it because of the efforts of a lot of historians, artists, archaeologist etc that we get to witness the Ajanta caves in such grandeur infused with so much history about the ancient times.

Monsoon Fashion Tips 2019: How to dress up best this season?