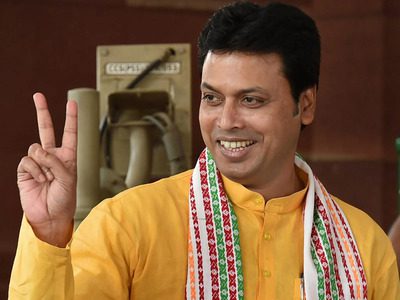 Lets just rewind to 9th march 2018, the day (Beep)lab kumar orf Biplab Deb assumed the office of Chief Minister of Tripura. From the day of incumbency of office he has made himself somehow bright in the limelight.

I would not like to call it this way but Biplab is coming across as Rakhi Sawant of Indian politics. He has attached many controversial statements and comments to his chair right from the beginning. Let us look at what Sir Biplab had to say on various areas of importance:

Do u know which is the closest point to the moon on earth? Let me give u a hint, it is not Mount Everest.

1. In euphoria of assuming such big responsibility the Chief Minister went so far saying that anyone who attempts to hinder the way his government works, his nails will be chopped. Funny as it sounds as autocratic and non-democratic it is. The foundation of governments in India is of participatory nature and it is the right of every citizen to be a part of the governmental policies and decision making process.

2. Oh sanjay of Mahabharat! now we know how could you sitting far away from the battlefield still could keep updated of the war. Of course I meant the reference of Internet, existing during the times of Mahabharat, given by chief minister of Tripura. Well lets get past this technical stuff.

3. Of everything important how can aesthetic values take a back seat. Sir Biplab has deep insights on the beauty peagents. I know how flattered Aishwarya Rai must be but let’s feel a little bad for Diana Hayden who apparently is not an epitome of Indian beauty according to him. Though to remind she was Miss World and not Miss India, why would she need the urge to conform to that Indian standard of beauty.

4. Alert Civil Servant Aspirants, In case you are planning to take UPSC civil services this fall make sure you’ ve done Civil engineering first. And even if the eligibility criteria do not say that explicitly but mechanical engineers must not take the exam. No offence! Advice by Biplab Deb IAS coaching centre.

5. Now we have a really deep and philosophical piece of advice which can actually solve the unemployment problem in India, and I am not joking. So the advice by the CM goes like this “Instead of running after government jobs, open a Pan shop and your account would have 5 lakhs”. Trust me anyone who has wasted years in IAS/PCS/Bank/SSC preparation would concede to his advice.

Read more about the role of Ambedkar in upliftments of Dalits.

Last but not the least; let’s cherish this idea that there is someone in this diplomatic and shrewd politics that is not at all politically correct. Some leaders though should brace up for Biplab is giving fierce competition ,no names taken, no offence inflicted, we all know who are the ones worried because of Biplab. And for BJP, I offer my sympathies. Modi ji must’ve won Tripura but with Biplab on the throne, retaining becomes more important.

Here is the full schedule of FIFA WORLD CUP 2018