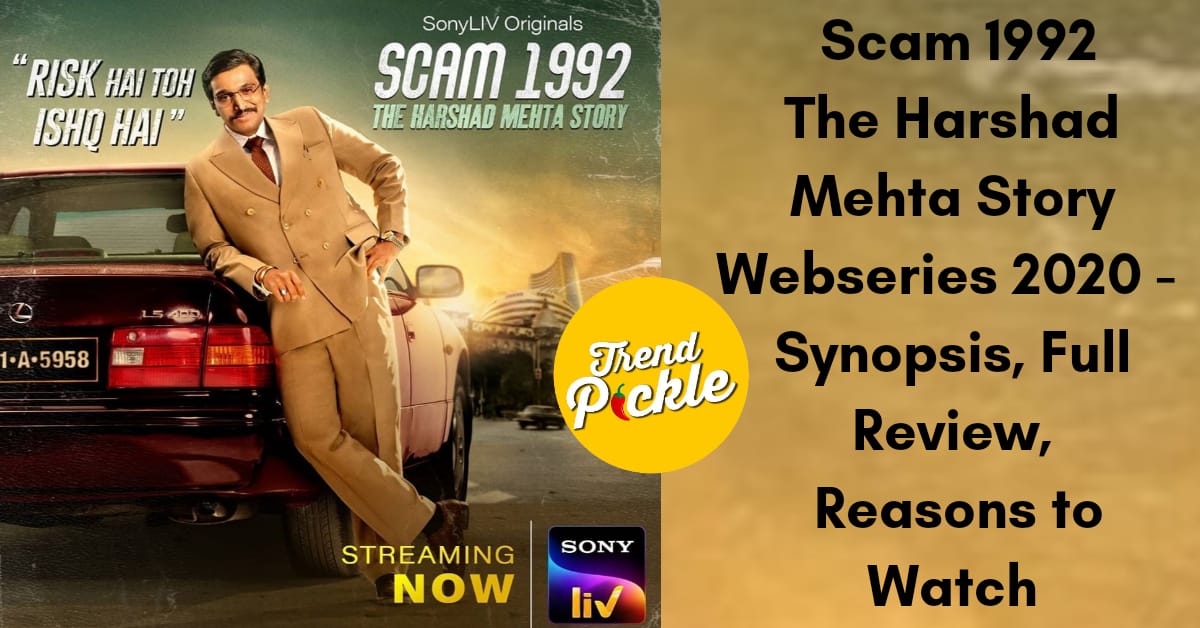 This SonyLiv Original web series is based on the book “The Scam: Who Won, Who Lost, Who Got Away” by Sucheta Dalal (former Times of India journalist) and her husband Debashis Basu (both the characters are a part of the series). This series depicts the journey of Harshad Mehta’s rise from a common man to owning Bombay stock exchange and his fall by being the man who became the face of India’s 1992 stock market scam worth 5,000 crore rupees that stunned the entire nation. The series extensively portrays how Harshad Mehta created the scam using the loopholes in the system.

Harshad Mehta (born 29 July 1954, Rajkot) was an Indian stockbroker. In 1984 he became the member of Bombay Stock Exchange as a broker and he also established his own firm called Grow More Research and Asset Management. He was also known as “The Big Bull” as he was said to have started the bull run in the stock market. It was alleged that Harshad Mehta was engaged in a massive stock manipulation scheme financed by worthless bank receipts, which his firm brokered in “ready forward” transactions between banks. Altogether, he had 28 cases registered against him.

Director Hansal Mehta has done a great job in presenting the Scam 1992 – The Harshad Mehta Story to the audience with originality and attention to details. The series is 10 episodes long, every episode being completely detailed. It seems like the team has studied even the minute details of the scam and Harshad mehta’s life and presented it in a highly informative way.

The best part about Scam 1992 is the gripping narrative, the story never dulls at any moment. The story of the scam is narrated with simplicity and in such a way that even an amateur can understand the hardcore terms of stock and money market. The different subplots are ideally merged with the main narrative. This is a detailed drama that keeps you hooked throughout.

Also, appreciation to the team for using the exact names of the characters and not shying away from showing the true names. The series provides the complete timeline, events, incidents, and names of people we would have heard about or read over the years. Visually, it’s a delight to watch the old times of the 80’s and 90’s Bombay that adds a magnificent beauty. The re-creation of that era is terrific and very authentic.

The initial episodes showed the setting and the working of the world. The individual spaces of the vital characters are easily identifiable. The family of Harshad Mehta and his personal life, is so immaculately presented. His rise as an outsider is a valorous journey with lots of mass touches. The dynamic bond between the Mehta brothers, their family, generate emotions very naturally. The underdog setting and the rise of Harshad Mehta in the stock market world is impeccably portrayed with great dialogues and added thrills.

The story is not just only about Harshad Mehta but also about other big market participants who use to rule the markets. The effort that the whole team has put in making the series shows on screen. Pratik Gandhi who lived the character of Harshad Mehta completely. He played the character with absolute conviction. Shreya Dhanwanthary as Sucheta Dalal did a great job with her excellent acting. She looked very believable in the role. Rest of the cast also did a fabulous job. Though it was a hectic task of displaying entire journey of Harshad Mehta in 10 episodes, but the master magician Hansal Mehta did that with sheer brilliance and perfection. Also, the background score and the cinematography are delightful.

1.‘Harshad Mehta’ a man who needs no introduction. His name itself is enough for someone to watch his biopic on the biggest Indian stock market scam. Also known as the Amitabh Bacchan of stock market he single-handed shook the entire country in 1992.

2.It is based on a true story and is a book adaptation so there is a lot of originality and no added melodrama. Also, this is a highly informative series as everything is presented in brief details.

3. Scam 1992 is directed by Hansal Mehta – National Award-Winning Director and is best known for movies that depict social and political realities. He has remarkable understanding of story-telling and characters.

4.The brilliant performances by the cast is a big reason to watch. All the actors truly lived the characters and brought life to the film.

5. This series has a strong narrative and impeccable writing that you can’t miss out.

So, without giving a second thought watch ‘Scam 1992 – The Harshad Mehta Story’ and get informed about all the minute details of India’s Biggest Stock Market Scam.