India withholds the highest peaks in the Asia and the World like Mount Everest and Kanchenjunga in which Himalaya has the most adventures peaks for trekking like in areas of Garhwal, Kumaon, Ladakh, Himachal, and Sikkim. They are the most fascinating locations ideal for trekking achievements. So, who so ever are looking for some adventures treks here are top 10 places where you can have a gala time while trekking. They have the highest altitude and the most beautiful view to see. We have compiled the list top 11 trekking places in India.

Covering the political boundaries of Nepal and Sikkim this trek at the foot of Mt. Kanchenjunga gives the breathtaking views of the Himalayan range. The charm and the placid atmosphere is the adequate reason to captivate tremendous trekkers all around the valleys. Singalila Kanchenjunga Trek is the century-old trek on the narrow path all along the Indo-Nepali border at the edge of the jungle and the rhododendron forests. Bring the fascinations of different Sikkim monasteries like Pemayangtse, Tashiding, Rumtek to bring a touch of culture and make this journey a rare venture. Kanchenjunga is surrounded with ranges closely resembling a person sleeping and hence the view from Sandakphu is popularly called ‘The Sleeping Buddha’. The Singalila ridge is actually an extension of one of the ridges that sweep down from the high snows of Kanchenjunga itself and the trek along this ridge is renowned as being one of the most scenically rewarding in the entire Himalayas. Sikkim trekking brings a rare and exotic experience. 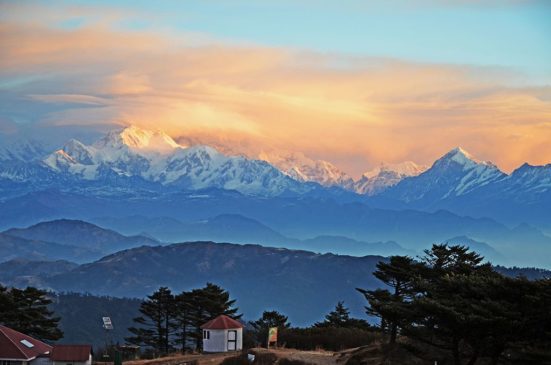 How to plan a trip to Singalila Kanchenjunga Trek?

Early morning visits the tiger hill for Sunrise on Mt. Kanchenjunga Peak. While coming back visit the Ghoom Monastery and Batasia loop. After breakfast drive from Darjeeling to trek point. The trail overlooks the Bengali plain south, and tantalizing glimpses of Kanchenjunga ahead, as one zigzag through rhododendrons.

Take a mossy paved path which snakes through a succession of forests and hamlets giving way, from time to time, to spectacular mountain sceneries.

Climb steadily to join the ridge trail towards Kalpokhari. Afterward, start a long and steep climb onto the Singalila ridge that leads us to Sandakphu. A remarkable 360 ° view from the top.

We walk to a prominent viewpoint for the magnificent sunrise over the Kanchenjunga, Jannu, Everest, Lhotse, Makalu and Cho Oyo. Throughout the day, there are ever-changing views: yak herds, silvery pine forests, tiny lakes ringed with grass, and the snow-capped Himalayan range in the background.

A pleasant descent through the woods takes us to Gorkhey then climb up towards Raman.

We pass through numerous villages and cross the Sri Khola over a remarkable suspension bridge.

We have come to the end of our trek route and this morning drive to Darjeeling, a distance of about 60 km. Overnight at a hotel.

In the morning after breakfast drive away back to Bagdogra airport to catch a flight to Delhi.

Walking on a frozen thick glass like a river, with mountains on both sides, is an experience of a lifetime. Chadar trek also known as Zanskar river trek is like no other treks in the Himalayas. Sleeping in caves like nomads is also an amazing experience with the temperature going down to -20 degree to -35 degree during the night. One of the highlights of the trek is the most magnificent waterfall frozen completely from top to bottom called Nerak waterfall. The best time to do this trek is from mid-January to mid-February, which is when the Zanskar river freezes and you get to walk on massive slabs of ice spreading for miles and miles. From 2019 onwards, the local administration has made it mandatory for every participant to undergo a medical examination at SNM Hospital, Leh post which a fitness certificate would be granted. 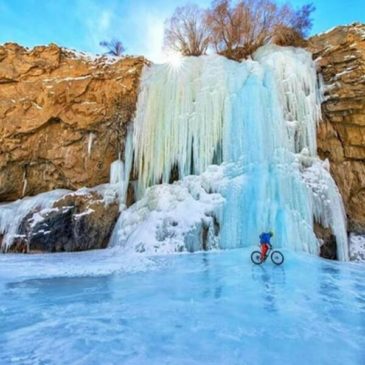 How to plan a trip to Chadar Trek?

Leh is also the western tip of Tibet’s Changthang plateau. In terms of climate, geology, culture, and religion Tibet and Leh are very similar. Being a cold desert that gets even severe in the winters– barren mountains hostile to most forms of flora and fauna, Leh isn’t the most convenient town to ease into.

Day2 Acclimatization and sightseeing in Leh

In the morning we leave Leh and drive past Nimu, the confluence of Zanskar and Indus rivers and then on to the road ahead at Tilat Sumdo. Here we descend to the chadar and get a sense of walking on ice. The Zanskar valley is perhaps one of the most remote Himalayan valleys in India and the true sense of remoteness becomes more evident as we approach our first camp.

The barren landscape changing colours with the movement of the sun is one of the most rewarding sights in the Himalaya. Sometimes, on the way, the ice is broken and we may have to climb up adjacent gorge walls for short distances or walk on the very edge.

We walk past many frozen waterfalls until we reach an especially beautiful one very close to camp. There is also a small wooden bridge that connects the gorge walls a little ahead and is the route to be taken to reach Ling shed in the summers. Nyerak Pulu is just below Nyerak village and is the only village we encounter in the famed Zanskar Gorge.

Explore the wonderful village of Nyerak and hike around the hillsides of the village to witness the winter landscapes of Zanskar.

Day7 Trek Nyerak- Chomo
Take the same route back on the Chadar and be surprised how different the entire grand scene from the opposite side! Overnight Camp

Unlike other treks, it’s surrounded with lush green valleys of Kullu to high in mountains. It’s almost like a balcony view to a different world like Lahaul Valley, incredible glacial valley thick pine forest, open meadows, adrenaline pumping waterways, and an adventurous crossing of a high altitude pass and covering Spiti districts also known as the gateway to Spiti Valley. Best time to do this trek is from June to Mid-October.

How to plan a trip to Hampta Pass Trek?

After an early breakfast drive to Jagatsukh village the start point of the trek. The trek starts from Jagatsukh going uphill all the way to Sarotu Thach via Bhanara Village. The trail leads through beautiful Pinewoods and green meadows.

The trail goes uphill once again and once you cross the stream the route eases and gets quite gradual till one reaches a clearing called Jogidug – a holy place. A little uphill from there takes us to our camp at Lamadug. There are some astonishing views of the Kullu/Beas Valley and also snowcapped mountains and peaks of the Pir Panjal range of the Himalaya.

It’s very gradual to the camp of Raori Kholi and not very long, but after we camp one can go for a nice walk around the camp exploring the sprawling meadows which is the grazing land for horses and sheep.

Day6 Trek to Pyangneru; the Base of Deo Tibba

Start with an easy ascent till the majestic Deo Tibba and Indrasan become visible. From there start your gradual descent into the Deo Tibba valley. Walk through trails filled with rhododendrons, silver birch and scented junipers. Descend to Alain River cross it and set up camp at Pyangneru (the base of Deo Tibba). You could go ahead on an excursion to the snout of the Deo Tibba Glacier from where Alain River flows out.

Start your day walking out of the Deo Tibba Valley. The trail is gradual all the way as one walk high up with Alain River on our left. Then turn into Hampta Valley from a high point and descend to Hampta River, cross it and walk to Chikka – a beautiful meadow beside the Hampta River.

Day8 Trek to Balugera
Start climbing up all the way to Juara and then to Balugera interspersed with many crossings of small streams and rivulets. Balugera, a cold place is the base of the Hampta Pass.

On this day you will reach the highest point at the top of the Hampta pass (4270). It’s uphill all the way till the Pass with excellent views of snowcapped peaks of the Pir Panjal Range of the Himalaya. From the pass, there are great views of Indrasan and neighboring peaks. After the pass, it’s a steep descent all the way to the other base of Hampta pass – Shea Goru. Camp at a beautiful campsite by a small river.

Day10 Trek to Chattru – Drive back to Manali

Cross the river to get on to the true right and then start our descent till we again have to cross the same river bank. It’s a steep descent till we reach the left bank of the mighty Chandra River after which it is a flat walk to Chattru.

Top 21 Thing To Do In Hyderabad – Best Tourist attactions!