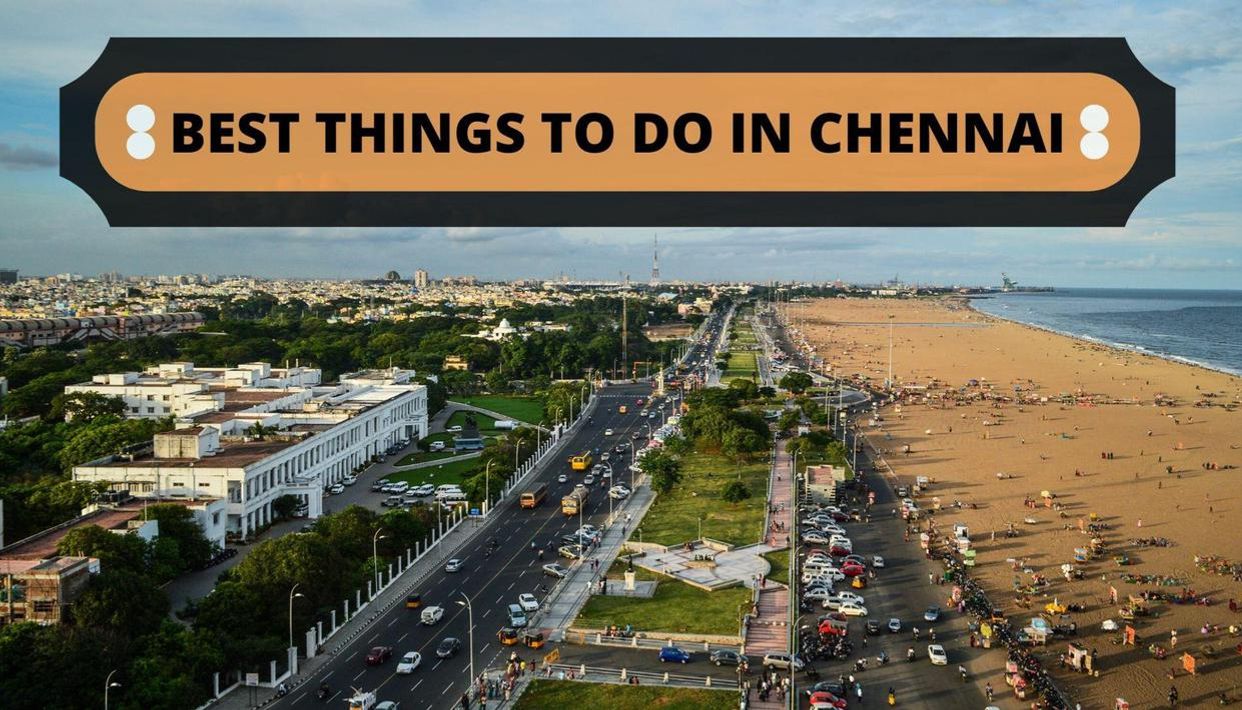 ‘Madras is not a word but an emotion.’ Every person from Chennai holds the same feeling towards it. Chennai, previously known as ‘Madras/Madrasapatinam’, is a metropolitan city with a rich history, heritage and tons of hope. It is a perfect interweave of culture, modernism and nature. Hence a welcoming home to all the people who seek opportunities at different things. Chennai has many places to visit and fun things to do that is of cultural, historical and natural importance. It is rightfully called ‘The Gateway to South India’. Due to the hot humid summers, it is appropriate to visit during winters (August to December). Chennai’s personality can be understood by blending in with the fabric of the city. Some of the highlights of Chennai’s best are listed below.

1. A Walk in Beach Promenade

Marina beach, the longest in the country and the second longest beach in the world measuring 13km in length, is a great asset to Chennai. The promenade was built in the 19th century by a British Governor who was mesmerized with the beach. The urban sandy beach, a major crowd attraction, has morning walkers, joggers, street food lovers and accommodates hundreds of sea lovers. Elliot’s beach or Besant Nagar beach is the second favourite beach with multiple famous eateries, food plaza, etc. A ride in the giant wheel promises a great view of the sea.

2. View from the Lighthouse

At one end of the Marina beach promenade, is the lighthouse. The bird’s eye view of the beach and the entire promenade can be seen from the lighthouse. It was built in 1976 and is one of the few lighthouses that has an elevator. Experiencing the vastness of the longest beach from it is a soothing treat to the human eyes.

3. The British Trail along Beach road

Madras was one of the four Indian cities to be under the British presidency. The British-built structures were of administrative and civic importance. The Marina beach road known as the ‘Kamarajar Promenade’ now, has these magnificent structures which are an amalgamation of Hindu, Islam and colonial architecture, arriving at a new style called ‘ Indo-Saracenic architecture’. Madras High Court, Senate House, Vivekananda House, Fort St. George, etc are some of the notable architectural marvels. Some of them are open only during special events due to its high heritage value.

Chennai has an immense number of museums. The Government Museum in Egmore, is a museum of human history and culture. It is the second oldest museum in India, built in1851. Many artifacts that represent ancient Chennai and the British reign are found here. Next to the museum is the National Art Gallery, which was built in 1909. The pink sandstone building has a decorative facade with intrinsic details.

The heritage complex of Mahabalipuram is one of the UNESCO World Heritage sites, located an hour away from Chennai city. The temple structures, caves and reliefs were carved out of monolithic rocks. It was built in the 7th century by a Pallava king called ‘Mahabali’. The Panch Rathas, a group of five chariots of the Pandavas, were each carved out from single rocks. The monument is mentioned in several world- historical scriptures and is open for the public.

Valluvar Kottam is a monument built in reverence to the Tamil poet and philosopher, Valluvar. It was built in the 1970s to strengthen the influence of the Tamil language. Constructed in Dravidian architectural style, the monument has an auditorium and structures with Tamil inscriptions. The highlight is the 39m high stone car, a replica of a temple chariot made with 3000 stones.

Cholamandala artists’ village in Injambakkam, is an artist retreat built by the artists themselves. The Madras Movement of Art with an aim to spread modern art, inspired this self- developed artists’ village with studios, galleries and theatre. Several art workshops are conducted here and the style of work adopted by many artists are exhibited here. This is open to the public on all days with a small entry fee.

Dakshinchitra is an experiential heritage museum that exhibits traditional art and architecture of all South Indian states. Traditional houses are rebuilt or transported from all over South India and are retained in its live size. Visitors can enter each house and experience the lifestyle and culture directly. This museum is one of a kind and is open on all days except Tuesdays.

Mylapore is one of the oldest settlements in Chennai with a famous temple, the Kapaleeshwarar temple. The exquisite Dravidian architecture and the temple pond is quite a sight amidst the city. The Mylapore Festival is one of the grand festivals that exhibits the cultural significance of the people and place. The festival happens for four days in January and the entire Mylapore area is flooded with people enjoying the food, music, art and heritage exhibits.

Connemara Library, Egmore is one of the oldest libraries with a repository of old books, publications and also has some of the country’s coveted literary works. It was named after Lord Connemara who built it in 1890. The architecture is very intricate with stained glass and a high ceiling. Unfortunately, it is open only during events like ‘World Book
Day’.

Wow🔥 great insight. A ride in ECR is lonesome and picturesque.