The Bhagavad Gita is considered as one of the most prominent and influential Hindu scripture. Bhagavad Gita is part of the great Hindu epic Mahabharata. The Holy books also referred as Gita is known for its philosophical, practical, political, psychological and spiritual values. The Bhagwat contains 18 chapter which was originally written in Sanskrit, the language of God. Here is a list of Bhagavad Gita quotes which will give true meaning to your life.

The book is the summary of the various teachings given to Arjuna by Lord Krishna. The book lays out a path of mystical devotion to Lord Krishna and describes the Hindu perspective on essential teachings such as reincarnation, moksha, and karma. Let’s look at some of the quotes from the Bhagavad Gita which can give a true meaning to your life. 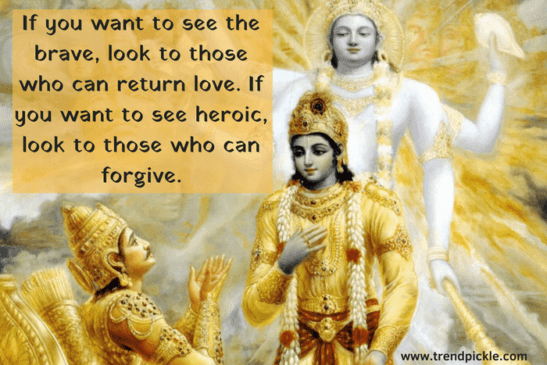 The Bhagavad Gita is set in a narrative framework of a dialogue between Pandava prince Arjuna and his charioteer Lord Krishna at the battlefield of Kurukshetra. During the war, Arjuna was confused and he was not able to decide what is right and what is wrong. He sought the guidance of Lord Krishna. Gita captures the guidance and teachings provided to Arjuna. The main theme of Gita is Dharma.  The Bhagavad Gita presents a fusion of the concept of Dharma, bhakti, the yogic ideals of moksha. It describes the different Yogas- Bhakti, Karma, Jnana, and Moksha. 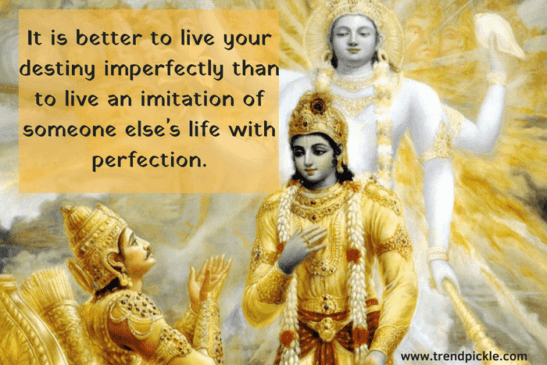 It is believed that three other people besides Arjuna listened to the Gita directly from Krishna. They were Sanjay, Hanuman, and Barbarik (son of Ghatotkach). Numerous commentaries (such as Śaṅkara, Rāmānuja, Chaitanya Mahaprabhu, Bhāskara, and Madhva) have been written on the Bhagavad Gita which differs widely on the views of the essentials. Charles Wilkins translated the Gita into English for the first time in 1785. Later it was also translated into many European languages. Did you know,  Lord Krishna tried to narrate the Bhagavad Gita to Duryodhana but he refused. He said that he already knows what is right and what is wrong. Lord Hanuman sat on the top of Arjuna’s chariot throughout the battle of Kurukshetra and he listened to the preaching by Lord Krishna. The Bhagavad Gita has been translated into approximately 175 languages. Lord Krishna compares the human body to a piece of clothes. The body just like clothes is temporary but the soul is permanent.  Soul changes bodies just like we change our clothes.

Lord Krishna says we should be moderate in everything and avoid extremities in life. He says a person is bound to fail in meditation if he does not maintain a balance in his day to day activities. 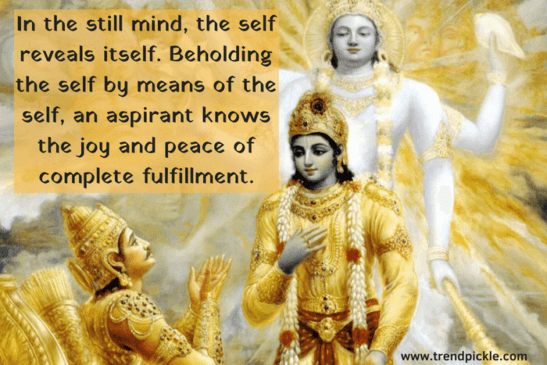 Lord Krishna says You need to overcome desires to experience the stillness of mind. All thoughts, feelings, and desires take birth in the mind. You can not look deep down yourself if your mind is not stabilized. The mind can be really quite only when a person is free from the countless desires. Have you ever read Gita, what thoughts and teaching inspired you the most?? Share your favourite Bhagavad Gita quotes with us in the comment section.

7 Best Rahul Gandhi Quotes that can change anyone life!

This is so incredible a great informative content keep it up!!!

I don’t know about the bullet points.. seems a bit reaching.|