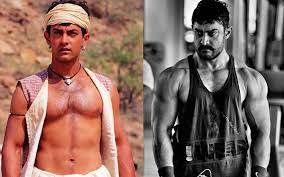 Aamir Khan a victorious actor, TV host, producer, director and one of the finest talents of Indian cinema. He spent over 30 years in Hindi films. He was also awarded Padma Bhushan in 2010, one of the Indian government’s highest civilian awards.

Given below are the most popular movies of Aamir Khan:

Plot: It is the story of three college friends who share a great bond. The film talks about self-actualization. This film shows the college journey and friendship.

Plot: The people of a small village in Victorian India plays a game of cricket against British rulers in reaction to the wrong tax imposed on villagers.

Plot: A rich and a poor boy trying to impress a girl in rivalry in the most important college event the marathon cycle race.

Plot: Two boys who belong to middle-class families compete to for a millionaire’s daughter and on the way run into a local gangster who turns their lives upside down.

Plot: A medical student quit his studies to join Indian Police Service to abolish terrorists after terrorists killed his brother and severely injured his father

Plot: A schoolboy is criticized by his parents for his poor academics and sent to boarding school where a teacher identifies that he has dyslexia and helps him to recover.

Plot: A tourists guide and a notorious flirt meets a Kashmiri blind girl and starts loving each other but at the same time he withholds a terrible secret that destroys both of them.

Plot: Children (a boy and a girl) of two businessmen fell in love with another poor boy and girl but the father of rich boy and girl wants them to marry each other.

Plot: A girl wants to become an actress and after that, a famous actor and his childhood friend both fell in love with her.

Plot: A boy idolised his freedom fighter father as a child and that boy revolts against a local gangster who killed an innocent youth, but his brother does not approve of his actions.

Plot: It is a story based on six young Indians who assist an English Woman to film a documentary on freedom fighters from their past.

Plot: Story of three childhood friends just out of college. Nothing comes in between them until they were apart and came into a relationship

Plot: Despite knowing that their families are enemies, both boy and girl fell in love and decides to escape.

Plot: The hero of the movie is the manager of the business which is in debt and guardian of his dead sister’s kids and later keeps a caretaker (Juhi Chawla) for kids and then both fell in love

Plot: Story based on runaway heiress in search of his beloved falls in love with another guy on the way

Plot: A taxi driver fell in love with a rich girl and marries her against her parent’s wish and later her parent’s try to create trouble in their life.

Plot: A tycoon suffering from short term memory loss who cannot remember anything more than 15 minutes and has many tattoos on his body and managed to find out his lover’s killer.

Plot: A circus entertainer robs bank in Chicago to avenge his father’s death. His trouble started when police inspector Jai and Ali suspect him of robbery.

Plot: An alien comes to earth for research purpose but losses his remote and ask questions regarding everything on earth.

Plot: Mahaveer Singh Phogaat a former wrestler decides to fulfil his dream of a gold medal for India by training his daughters for commonwealth games despite the alive social stigmas.

15 Best Benefits of Peppermint for Skin and Hair