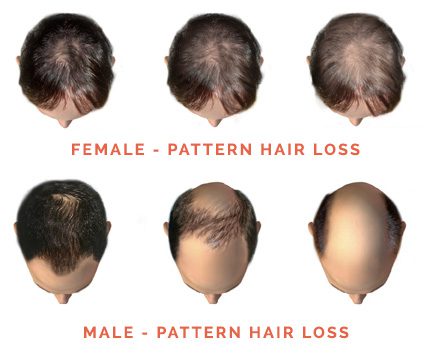 What is pattern baldness?

Although generally most common in men, pattern baldness can occur in both men and women. The condition is characterized by the thinning of hair and a receding hairline. This is seen mainly on the top of the head and around the temples. Those suffering with pattern baldness may notice their hair falling out when it is combed and may develop ‘patches’ of baldness around the scalp area. Male pattern baldness has a genetic factor and often runs in families. Although it can cause a large amount of upset and stress, it is not a serious medical condition; does not pose a threat to physical health and luckily there is medication to help those who suffer in which it is easy to get your hands on or even delivered to your door by Express Pharmacy.

The most distinctive indicator of developing male pattern baldness is a receding hairline, and this can start during the teenage years in some men. At present, research shows that 16% of boys aged 15-17 experience the initial stages of male pattern baldness. As well as a receding hairline, male hair loss generally occurs on the crown of the head – developing into what is commonly called a ‘bald spot. Hair loss also causes baldness around the temple areas. The hair begins to look noticeably thinner in these areas and the scalp begins to become visible beneath the hair.

Although pattern baldness does not pose a danger to health, it can be highly distressing for those experiencing it. The feeling of a lack of control over the issue and one’s changing appearance can be distressing. Many men also find the condition embarrassing because of its visible nature. Younger men can find pattern baldness particularly difficult to cope with due to the fact that it is a condition associated with ageing. Losing hair can alter the way a person looks and this can cause issues of confidence and also alter self-image; both of which can have a negative effect on mental health. Many men seek treatment for pattern baldness in order to lessen its physical effects and alleviate its negative psychological effects.

Whilst there is no proven ‘cure’ for pattern baldness, there are some very effective treatments available that can address the problem.

By far the most effective treatment for pattern baldness is the drug finasteride. This treatment, which is taken in the form of a tablet over the course of three to six months, inhibits the production of dihydrotestosterone (DHT) which is the hormone responsible for the weakening of the hair follicles. When taken at the same time each day, over a period of six months, finasteride has been shown to increase hair growth in 90% of cases. It is easy to take and does not require the external application of lotions, foams or shampoos. It is a good option for those who do not want the issue of treating male pattern baldness to impact greatly upon their daily lives. The tablet can be taken with or without food. Whilst finasteride is proven to be an effective treatment for male-pattern baldness, it is not recommended for use by women who are experiencing pattern baldness due to its interaction with testosterone.

In contrast to finasteride, minoxidil is a topical treatment and comes in the form of a cream, lotion or foam that is applied directly to the scalp. When application takes place daily, successful regrowth has been recorded within 48 weeks of its initial use. Minoxidil is less effective than finasteride at encouraging new hair growth, but is an effective alternative for those who do not want to take a tablet as a form of treatment. It is easy to apply and doesn’t take long to become embedded into the daily routine. Women experiencing pattern baldness should opt for minoxidil as a form of treatment.

As with many health issues, early treatment is key when it comes to the issue of pattern baldness. Once the hair follicles show signs of weakening and hair starts to thin, it is important to start effective treatment in order to encourage strengthening and improved growth.

10 Best Energy Boosting Foods For You

Why You Should Use Organic Supplements To Empower Your Health?

7 Vital Traits of the Ideal Physician