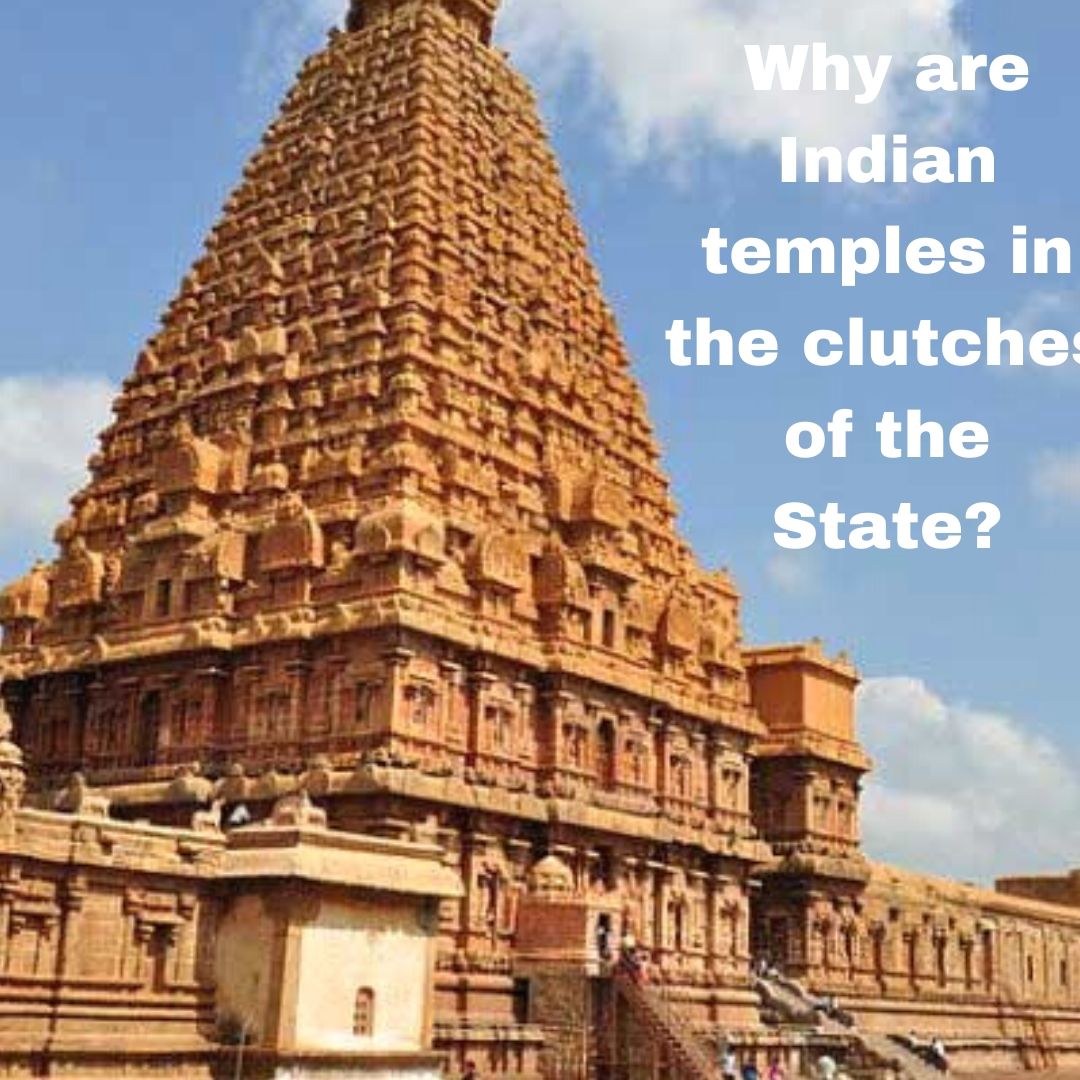 Temples in India represent the survival of the ancient civilization, architecture, and wealth of the land. Temples had a social, economic, and sometimes administrative function too. They have historically played as the center of Hindu society for all practical purposes. Whoever came to India, knew how to, systematically, break it apart by attacking its nerve center. Apathy towards temples, today, is the tree from the seeds of caste divide and dissension. The wine tasting elites of our society often forget that the temples keep the traditions alive: those very traditions that they boast about in front of the world.

Udupi Maths and temples like Subramanyam temple in South India have an uninterrupted history of providing langar to schools and the poor. There are enough communities that are taken care of by the temples alone. They generate a sense of pride that belonging to the Hindu fold is in no way inferior to any other religious denominations. But the social justice movement from 1917 to 1927 has somehow demonized the temples as the belonging of one caste which is a white lie. There are tribal temples and many Shiva temples in southern India which are administered by non-Brahmic castes. Vishwakarma is the caste that was given the sole responsibility of sculpting a deity, and they played their role so well that they could feel the stones and do magic with a block of it. But, since the independence of India, there has been the pressure of the State on the temple administrations to include people from other faiths to take up the jobs which otherwise require a certain degree of religious devotion. This resulted in ancient art to slowly fade away. Also, anyone who takes up the profession of sthapathis has to follow several rituals including fasting during sculpting the diety. One can not confidently say that people from other religions will follow those Hindu rituals or give the same reverence to the process of murti-sthapna as the devotees themselves do.

In Tamil Nadu, for example, the 1935 state legislation, Chapter 6(a) allowed the state to notify temples and takeover its administration on the pretext of mismanagement. In 1950, Udupi Math, Chidambaram temple, Guruvayur temple were notified for takeover by respective state governments. They challenged the government orders and the constitutionality of such provisions in respective high courts. Madras High Court agreed to the petitioners upholding the right of the community to administer their religious institutions under Article 26 of the Indian Constitution. However, the interference of the state continues with the same provisions paraphrased in its legislation that the Supreme Court of India struck down as unconstitutional in 1954. They are still in force. All the 38000 temples across Tamil Nadu are under state control on the pretext that mishandling of resources is inevitable. The ground is so inept for 60-70% of the temples that earn less than Rs. 10,000 annually. Where is the question of corruption and maladministration and misappropriation when they don’t earn sufficiently. That is roughly less than 30 rupees a day that cannot even support simple offering to the deity, leave alone the priests getting anything significant from it.

This particular legislation was challenged only in 2012 by late Sri Swamy Dayanand Saraswati. Apathy towards Hindus of this country speaks for itself. Of all the communities in India, only the Hindu community’s institutions are interfered with by the State. It is inherently discriminatory.

O n 6th of January, 2014, Justice Ranjan Gogoi came out with a landmark judgment in Chidambaram temple case stating that whenever an executive officer is appointed by a state to administer a certain temple, two conditions have to be followed:-

There are multiple state legislations controlling temples in Maharashtra (Siddhivinayak and Mahalakshmi temples), Bihar, Andhra Pradesh, Telangana, Orissa, etc. Just why is it restricted to one community as if Madrassas and Churches in India are free from corruption and mismanagement. There is no significant step taken towards these non-Hindu institutions since independence or even before that.

Temples of India are left with no power and resources to uplift the society and carry on even a religious activity without taking permission of the presiding state representative on the board. If freed from the shackles of the state control, temples as institutions alone can fight hunger, poverty, and illiteracy. Continuity of unmatched traditions of this soil can be achieved which the State, otherwise, shows no interest in patronizing. Temples have resources to support the livelihoods of the communities which depend on the religious activities of the temple, e.g., dance performers, singers, florists, sculptors, art and craft makers, priests, etc. The revenue that it can generate through various religious activities, without the intervention of the State, can go to many people who otherwise choose to join the bandwagon where the sun is rising since ever. For example, all the donations from the Hindu community for religious purposes was diverted by the Karnataka’s Department of Hindu Religious and Charitable Endowments board to subsidize Haj. Now, one would argue what is wrong with it. The only point is that the money was not used for the purpose the donor wished it to be used for. So, the state is indirectly helping fraudulent conversion phenomenon to rise. It is human tendency to choose a life of convenience and peace. The money is not used for either Vedic schools or funding reforms in the Hindu community or generating awareness about the Hindu way of life, and it happens to make up the majority of this nation which is continuously taken for granted.

In 2017, Madras High Court has found the HRCE department and police officials of Tamil Nadu hand in glove with the thieves of temple art and architecture. HC observed that they have violated the religious and cultural rights of the Hindu Community and have failed in discharging their duties. Across Tamil Nadu, executive abuse as far as temples are concerned is widespread to the extent that the state representatives to the temple administration are appointed without direct orders from the state and that too for an indefinite period without the presence of proven mischief. They get a free pass without any check and end up being the facilitators of theft.

The patience of the Hindu community is tested whenever it comes to the dignity and freedom of their religion. While the politics in India revolve around vote banks, minorities are continuously appeased, and the unfortunate majority of the country waits to be heard by the apex court on this matter. Even cases like Triple Talaq and Right to Privacy were given preference, but the continuous theft of the wealth of the Indian temples since the pre-independence era has not got enough importance. The right to manage one’s religious affairs without intervention is a fundamental right that the state legislations have violated again and again. One has to wait for the SC hearing to know how far this discriminatory exercise of power concerning a single community is justified.

This is a very well written piece of article. it is high time now that the State leaves the doors of temples. The “secular” State should maintain the meaning of the word in all gist and form.