Lord Vishnu is one of the principal deities of Hinduism and one of the “preserver” in the Hindu trinity (Trimurti) that includes Brahma and Shiva.

Lord Vishnu takes various avatars as “the preserver, protector” whenever the world is threatened with evil, chaos, and destructive forces. His most notable avatars include Lord Rama in the Ramayana and Lord Krishna in the Mahabharata. He is also known as Narayana, Jagannath, Vasudeva, Vithoba, and Hari.

Dashavatara refers to the ten primary avatars of Lord Vishnu who is said to descend in form of an avatar to restore cosmic order. The word Dashavatara comprises of dasa meaning ‘ten’ and avatar means ‘incarnation’ hence Dashavatara translates to ten incarnations.

The order of the ancient concept of Dashavataras has been interpreted to be reflective of modern Darwinian evolution.

Lord Vishnu has already taken 9 Avatar on Earth and yet to take “Kalki” Avatar at the end of Kali Yuga.

Kali Yug – Buddha, Kalki (yet to have)

Matsya is the fish avatar in the ten primary avatars of Hindu god Vishnu. Lord Vishnu takes Matsya avatar to rescue Manu (As per Hinduism He is the first man on Earth) and earthly existence from a great flood. He then takes a boat to the new world along with Manu and one of every species of plant and animal.

Kurma is the second Avatar of Vishnu. Lord  Vishnu takes Kurma at a time of crisis to restore the balance on Earth. The devas and asuras were churning the Ocean of milk (Samudra Manthan) to get Amrita, the nectar of immortality.  The mount Mandara that was being used as the churning staff started to sink. Then Vishnu took the form of a giant tortoise to bear the weight of the mountain on his back.

Varaha is the third Avatar of Vishnu. Hiranyaksha was an oppressive demon Asura who attacked the heavens, thereafter kidnapped and attempted to destroy goddess earth. He carried earth to the bottom of the cosmic ocean. The battle between Varaha and Hiranyaksha is believed to have lasted for a thousand years, then Varaha finally defeated Hiranyaksha. Varaha carried the Earth out of the ocean between his tusks and restored it to its place in the universe.

Narasimha is the fourth avatar of the Lord Vishnu where he incarnates in the form of half lion and half man. Narasimha destroys all evils, ends religious persecution and calamity and restores Dharma on Earth. Hiranyakashipu, the elder brother of demon Hiranyaksha, was granted a powerful boon from Brahma that Hiranyakashipu cannot be killed by man or animal, in day or night, inside or out of his palace, on earth or on the stars, with a weapon. Lord Vishnu the descended as an incarnation, with the body of a man and head and claws of a lion. He then killed the rakshasa with his claws at the courtyard of his house at dusk while he lay on his thighs.

Vamana is the fifth avatar of Hindu god Vishnu. He incarnates in a time of crisis to restore cosmic equilibrium by defeating the Asura king Mahabali, who had acquired too much power over the universe. Bali (The fourth descendant of Hiranyakashyap) was able to defeat Indra with his devotion and severe penance. This humbled the other deities and extended his authority over the three worlds. The gods requested to Lord Vishnu for protection and he descended as a boy Vamana.

Vamana approached Bali and was promised that he will get whatever he asks. Vamana asked for three paces of land. Bali agreed, and then the dwarf boy changed his size to that of a giant. He stepped over heaven in his first step and the Patal (underworld) with the second. Bali realized that Vamana was nothing but Lord Vishnu. As there was no space left, the king offered his head as the third place for Vamana to place his foot. The avatar did so and thus granted Bali immortality.  Vamana appreciated Bali and his grandfather Prahlada and made him ruler of Pathala, the netherworld. For more details about eight immortals please read here.

6. Parashurama (the warrior with the axe) –

Parashurama is the sixth avatar of Vishnu in Hinduism. Like other avatars of Vishnu, he appears at a time when overwhelming evil prevailed on earth. The warrior class, with weapons and power, had begun to abuse their power, take what belonged to others by force and torturing people. Parashurama corrects the cosmic equilibrium by destroying these evil warriors. He is the son of Jamadagni and Renuka and received an axe after a penance to Shiva. He is the first Brahmin-Kshatriya in Hinduism, or warrior-saint, with duties both of a Brahmin and a Kshatriya.

King Kartavirya Arjuna and his army visited the father of Parashurama at his ashram, and the saint was able to feed them with the divine cow Kamadhenu. The king asked for the cow but Jamadagni refused. The king got angry and he took it by force and destroyed the ashram. Parashurama then killed the king at his palace and destroyed his army. In revenge, the sons of Kartavirya killed Jamadagni. Parashurama took a vow to kill every Kshatriya on earth 21 times over and to fill five lakes with their blood. Ultimately, his grandfather, rishi Rucheeka, appeared before him and made him halt. He is a Chiranjivi (immortal) and believed to be alive today in penance at Mahendragiri (Currently in Odisha). For more details about eight immortals please read here. Rama or also known as Ramachandra is a major deity of Hinduism. He is the seventh avatar of the god Vishnu, one of his most popular incarnations along with Krishna and Gautama Buddha. In Rama-centric traditions of Hinduism, he is considered the Supreme Being. Lord Rama was born to Kaushalya and Dasharatha in Ayodhya. His siblings included Lakshmana, Bharata, and Shatrughna. He married Sita. His story as recounted in one of the most widely read scriptures of Hinduism, the Ramayana. While in exile from his own kingdom with his brother Lakshman, his wife Sita was abducted by the demon king of Lanka, Ravana. He traveled to Lanka, killed the demon king and saved Sita.

Lord Krishna is a major deity of Hinduism. He is the eighth avatar of the Lord Vishnu, one of his most popular incarnations along with Rama and Gautama Buddha. He was the eighth son of Devaki and Vasudeva. He is the hero of various legends and embodies qualities such as love, naughtiness, and playfulness. Krishna’s birthday is celebrated every year by Hindus on Janmashtami according to the Hindu calendar, which falls in late August or early September of the Gregorian calendar. He overthrows and kills the tyrant king, his uncle Kamsa after quelling several assassination attempts by Kamsa. He reinstates Kamsa’s father, Ugrasena, as the king of the Yadavas and becomes a leading prince at the court.

Buddha is the founder of Buddhism, is commonly included as ninth avatar of Vishnu in Hinduism. Gautama Buddha was an ascetic (śramaṇa) and sage.

He is believed to have lived and taught mostly in the eastern part of ancient India sometime between the 6th and 4th centuries BCE. 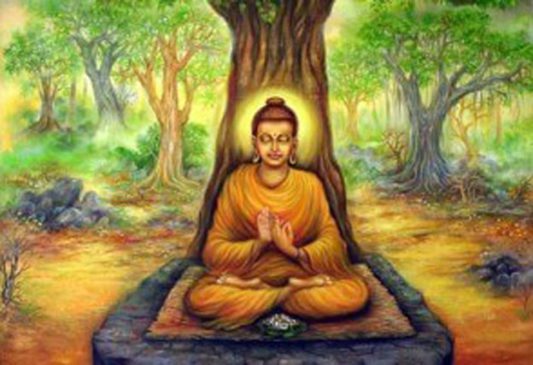 Kalki is the nemesis of demon Kali and the tenth avatar of Vishnu in Hinduism. Kalki will be the final incarnation of Vishnu, predicted to appear at the end of Kali Yuga, our present epoch. He will be atop a white horse and his sword will be drawn, blazing like a comet. He is the harbinger of the end time in Hindu theology and will destroy all unrighteousness and evil at the end of Kali Yuga, after which he will usher in Satya Yuga. If you liked the story, Please share with your friends.

cool blog. Cheers for showing us.