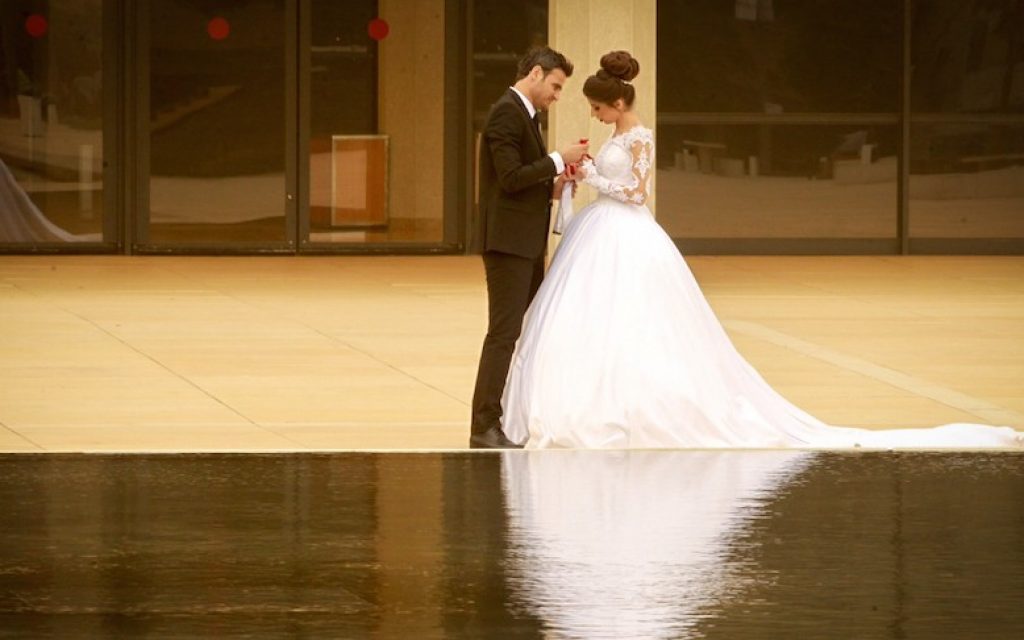 Talking about Russian wedding, many foreigners immediately start thinking about some horrible stereotypes or fish stories which have nothing in common with reality. People who decide to date vegetarian singles can face a similar situation just because, on the one hand, they have heard a lot about that, but on the other hand, they have never been really interested in the real facts. Usually, women tend to get all caught up in all the preparatory processes, while their future husbands take care only about ensuring enough money. Russian girls are very feminine and romantic; they have started reflecting on this big day since childhood because each of them adores fairy tales that end with everyone living happily ever after. If you like finding out some interesting facts about weddings in different countries, you will get a great opportunity to learn something new about Russian weddings, break down some prejudices, and understand the role of wedding bread and sprinkling rose petals.

Many years ago, parents decided the fate of their children, choosing the best match for them according to certain requirements. In ancient times, relatives and parents of the bridegroom came to the girl’s house to reach agreement on a marriage. Often, future relatives got to know each other and make connections during the very matchmaking. Nowadays, future newlyweds themselves choose their soulmates, and matchmaking has undergone many changes. The ceremony has become much simpler: the bridegroom comes to the bride’s parents and asks for their daughter’s hand in marriage. However, some people even neglect this rite and simply inform both sides of their decision.

A wedding ring is on the right hand 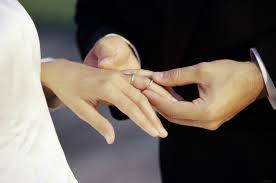 People cannot get married without wedding rings. Traditionally, newlyweds exchange the wedding rings, putting it on the ring finger of the right hand. Neither a man nor a woman should go wrong with the finger; otherwise, people start talking about bad luck. As you know, the heart is a symbol of love. In our time, scientists know everything about the human heart and know that it plays a much bigger role than of a symbol. However, in the old days, people took this symbolic material seriously. Moreover, they also believed that the vein in the ring finger of the right hand goes straight to the heart. Thus, it was indicated by the stars that this finger is for wearing a wedding ring. The older generation continues to believe in this omen.

This rite has a deep sacred meaning. At the time of worship of the pagan gods, the road the newlyweds were walking along was sprinkled with flower petals to appease the goddess of fertility. Rice and money, which were thrown at the feet of the young people, signified wealth and prosperous life. Many nations use this beautiful rite. In our time, this function, as a rule, is performed by all the guests of the wedding.

The bread “crown” for the newlyweds 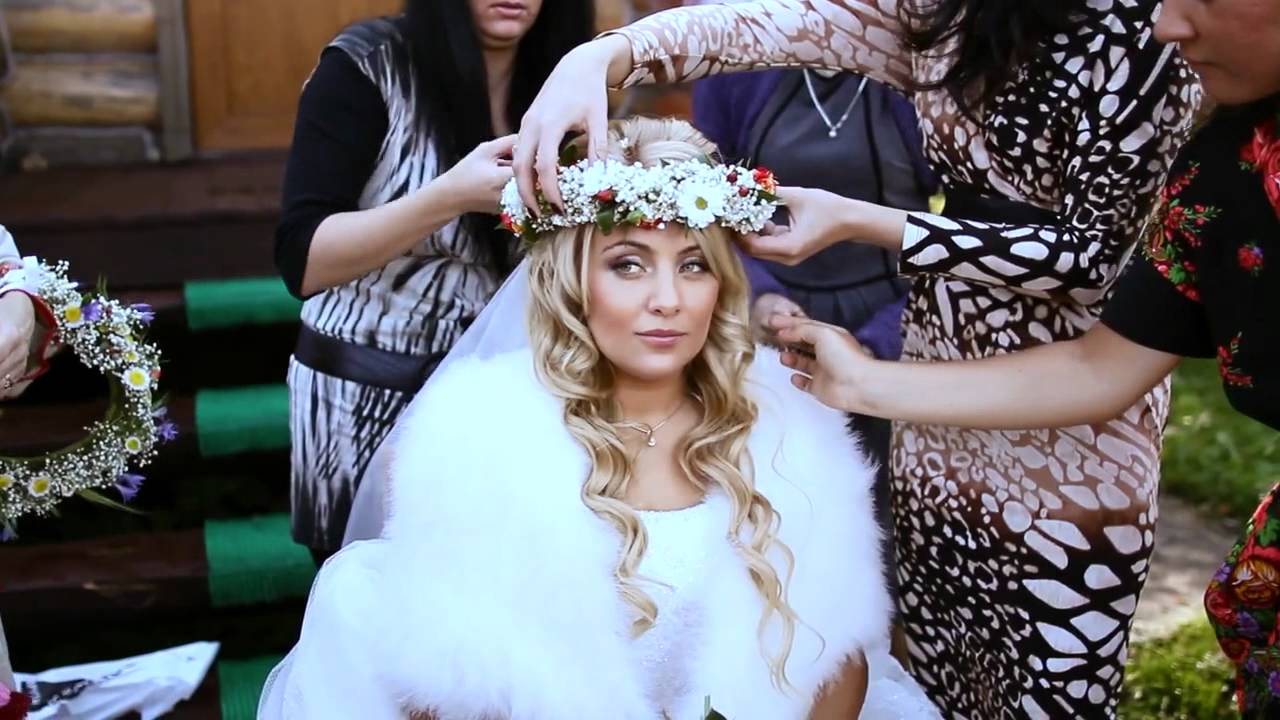 Wedding bread is baked fluffy and ruddy, with a golden crust and fragrant pulp, having repeated all the traditions and customs. In the old days, the bread was baked by happy married women, and a married man, who was a relative of the bridegroom, put it in the oven, banking on the well-being of the young people. Even now, while making a wedding bread, close people of the newlyweds hope for their family happiness and put all the love into the process. The wedding bread is decorated with all the skill and care, creating birds, flowers, ornate patterns on the top of the bread. There is a sign people in Russia adhere to: the more magnificent the wedding bread is, the stronger the family will be.

Meeting with bread and salt 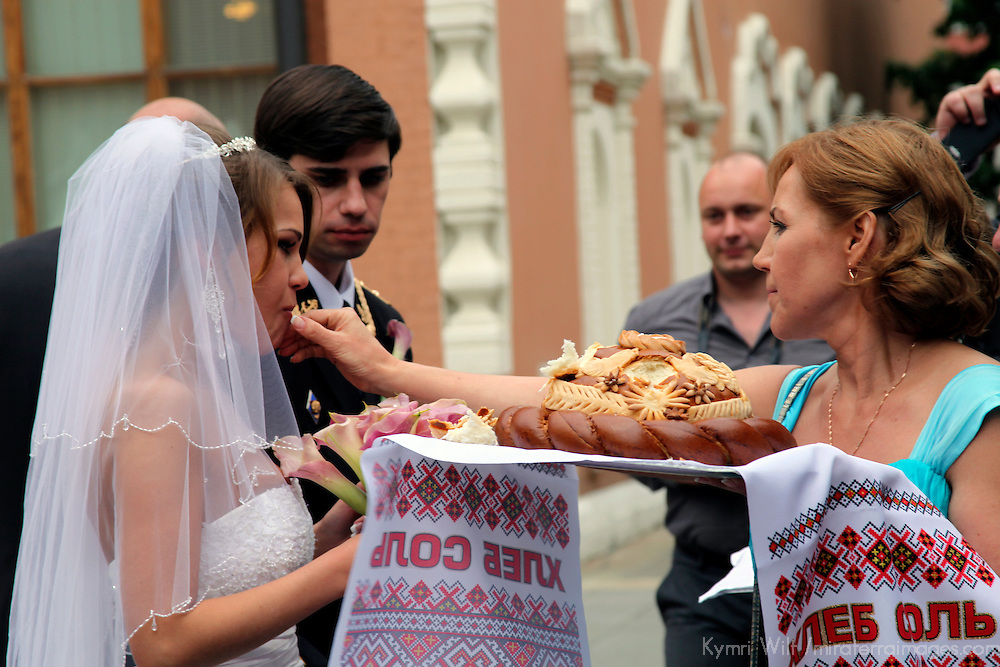 When young people register their marriage, they go for a walk in the woods or in the park to make a wedding photo session. After that, they go to the groom’s house, where his parents meet them with bread and salt. The newly-married couple should tear off two pieces of bread, and feed each other, having sprinkled each piece with salt. People say that one whose piece is larger will lead the family.

Sometimes, the groom’s parents meet the couple with bread and salt in the hall where the wedding celebration takes place. This is usually done when there are long distances in the city, and they don’t want to waste time. The wedding bread is a symbol and a guarantee of a happy life, and each guest should take a part of it. So, traditionally, the rest of the wedding bread is divided into three parts. The top one is for the bride and groom, the middle one is for the guests, and the bottom one is for the musicians for helping with the wedding party. Besides, earlier, it was obligatory to leave some part to the poor as a symbol of the future well-being of the family. Any wedding bread cannot be served without a traditional embroidered cloth. Usually, people embroider birds in black and red colors as a sign of talisman and good luck and complement them with patterns and flowers. Thanks to the wedding bread and old traditions, the wedding in Russia is held magnificently, giving the blessing to the young people for their future life together.

In Russia, people say “Gorko!” (Russian for “bitter”) which means that the bride and groom should kiss. According to one version, their ancestors were very superstitious, and they seriously believed in evil spirits, who, in their opinion, adored to sabotage joyful people. These evil spirits especially did not like when people were happy and excited. So, trying to deceive the evil spirits, people shouted “Bitter!” at the wedding, thus showing that they aren’t as happy as they seem. Upon hearing this, the evil spirits had to believe in that and go away! In our time, having heard this word, newlyweds should start kissing. The longer they are kissing, the stronger their marriage will be.

Dance of a newly-married couple

It is one of the most touching wedding traditions which, as it has turned out, came to Russia with Russian Czar, Peter the Great. At that time, a ball was an inherent part of the wedding party which the newlyweds opened in honor of their marriage. Today, the classic waltz is gradually taking a back seat because instead of it, the newlyweds please guests with staged dances in which they tell the story of their relationship. Sometimes, friends and relatives take part in the wedding dance of the just married couple. Nowadays, wedding dance is often a unique part of a celebration in which the bride and groom show their creative potential and surprise guests with an unusual performance.

Taking off the veil

This tradition can be considered the most ancient and beautiful one. In ancient times, the bride wore not a veil but a wreath, entwined with ribbons. Married women could not walk with uncovered heads, and wearing a headscarf was mandatory for them. So, after taking off the wreath and taking the hair out of braids, the wife’s head was covered with a kerchief. Today, the bride does almost the same, taking off the veil. This ceremony symbolizes the transition from the unmarried life to the family one. However, in everyday life, Russian women cover their heads only voluntarily.

Has a career in Finance lost its charm?