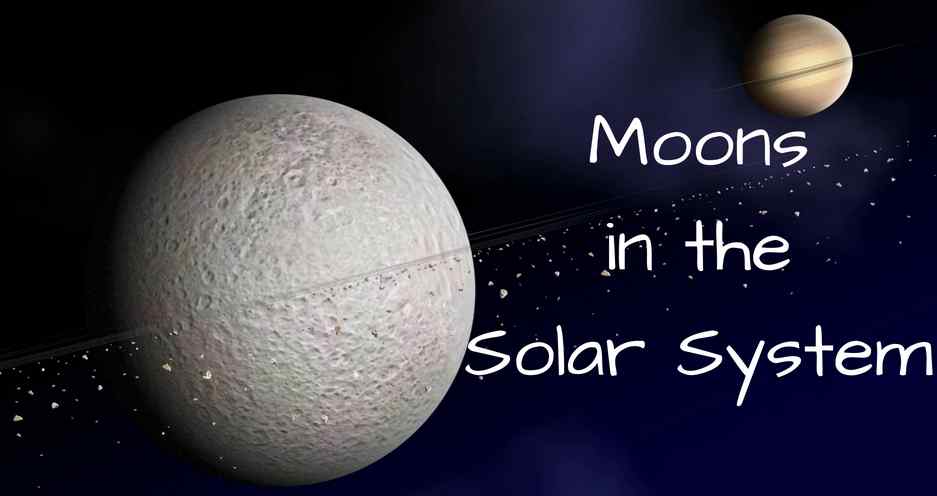 Venus and  Mercury are the only planets that do not have any moon. Mercury does not have any moon because Mercury is very close to the sun so it wouldn’t be able to hold on to its own moon. Any moon with a large distance from Mercury would be in an unstable orbit and will eventually get pulled into the Sun. If the moon were too close to the planet they would be destroyed by tidal gravitational forces and most likely crash into Mercury. Why Venus doesn’t have a moon is a mystery that is yet to be solved.

Earth has only one Moon. Read more about Earth’s interesting Moon facts here.

Mars has two moons named Phobos and Deimos which are irregular in shapes. Both were discovered in 1877.

Ever wondered how many planeJupiter has 69 moons out of which 53 moons have been officially named. Jupiter’s four main moons are Io, Europa, Ganymede, and Callisto. These moons are named the Galilean moons after Galileo Galilei. Jupiter features some of the largest moons in the solar system.

Ganymede is the largest moon in the Solar System and the 9th largest object in the solar system. It is 8% larger than the planet Mercury. Ganymede is the only moon which is known to have the magnetic field.

Callisto has an approx similar diameter to the planet Mercury but it has only one-third of Mercury’s mass. The surface of Callisto is the most heavily cratered surface in the Solar System. Its surface is mostly covered with impact craters.

Here are 14 interesting facts about our Solar system.

Saturn has 62 moons out of which 53 moons have been officially named. Saturn’s largest moon is named Titan. it is the only moon known to have a dense atmosphere. Other than Earth, Titan is the only object in space where clear evidence of stable bodies of surface liquid has been found.

Uranus has 27 moons. All of these have been named after characters from Shakespeare’s and Alexander Pope’s works. The ones that are well-known amongst these are Titania, Oberon, Miranda, Ariel, and Umbriel.

The largest moon of the dwarf planet Pluto is named Charon. It was discovered in 1978 and has a diameter that is around half of Pluto’s diameter.

So, do you think we have managed to answer your question of ‘ How many moons does each planet have ?’. Also, do you know of any other interesting facts about the number of moons of each planet of the solar system? Do let us know in the comments below.

The 11 Tallest Mountains in the Solar System

You’re pretty informative. Is it ok to volunteer a question? It’s just that..I’d add extra reasons that fit this.|

Great article! Thanks for posting it.
Do you think it’s fair to say that Charon is a moon of Pluto? Could it be more accurate to say that Pluto-Charon is a binary dwarf planet system? Sure, Pluto is larger, but Charon doesn’t orbit Pluto. Rather, the two orbit a point in space between them (closer to larger Pluto, but still — a point in space between them).