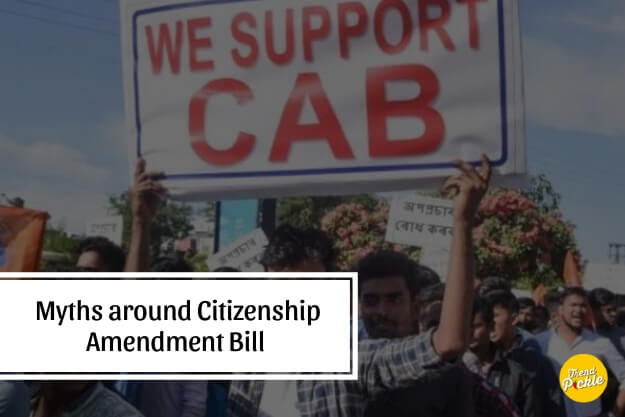 The Citizen (Amendment) Bill was proposed by Amit Shah, a bill amending the Citizenship Act,1955 to make illegal migrants who belong to Hindu, Sikh, Buddhist, Jainist, Parsis or Christian community, who entered India or or before 31st December 2014, eligible for Indian citizenship.

There have been many distortions of facts created around the bill. The Government of India issued a 8-point explainer about the myths and clearing them with the correct fact.  Here, we are with 10 myths around the Citizenship Amendment Bill.

Myth: Citizenship Amendment Bill will give citizenship to all immigrant.

Fact: The CAB offers citizenship only to six minority communities – Hindus, Sikhs, Buddhists, Jains, Parsis and Christians, who are illegal migrants from Pakistan, Afghanistan and Bangladesh.

Myth: It violates Article 14 – Right to Equality before law

Fact: It is a true fact that Article 14 describes the concept of Equality before the Law, ensuring that none of the religious community is religious community is discriminated against. But, it also has a provision for “reasonable classification”, in which the principle of equality is reduced. Thus, this validates the government’s move of positive discrimination if the criteria of the classification is reasonable.

Myth: CAB dilutes the Assam Accord

Fact: The Assam Accord was signed on 15th August 1985 between All Assam Students Union and representatives of the Government Of India. It was a protest demanding identification and deportation of Bangladeshi Immigrants. This ended with the signing of the Assam Accord.

The Government of India states that “Citizenship Amendment Bill does not dilute the sanctity of the Assam Accord as far as the cut-off date of March 24, 1971, stipulated for detection/deportation of illegal immigrants is concerned.”

Myth: CAB will lead to domination of Bengali speaking people in Assam and North East

Fact: The Government of India affirms that “Most of the Hindu Bengali population is settled in Barak Valley of Assam, where Bengali is declared the second State language. In Brahmaputra Valley, Hindu Bengalis are settled in isolated pockets and have adapted themselves to Assamese language.”

Myth: CAB will trigger migration of Hindus from Bangladesh

Fact: Seeing the atrocities against minorities in Bangladesh, the minorities have already migrated from the country. Moreover, with the coming down of the atrocities against minorities in Bangladesh, a chance of religious persecution is highly improbable. The GOI has given a cut-off date of 31st December 2014, and only those migrants who have entered India on or before the cut off date will be eligible for citizenship.

Myth: CAB is a ploy to grab tribal land by accommodating Hindu Bengalis

Fact: Hindu Bengalis are settled in Assam’s Barak Valley away from the Tribal Belts and Blocks. The Inner Line Permit (IPL) protects the tribal areas. Every citizen of India, who doesn’t belong to these states, have to obtain a permit in order to enter these protected states. The Government of India has restricted the provision of CAB to the entire country excluding the states covered under the Sixth Schedule.

Myth: What about the Native Tamilians in Sri Lanka and the Tibetans?

Fact: In this Bill, the Government talks mainly about the minorities who are persecuted. But, it doesn’t ignore the other refugees who need help.

Fact: The Citizen (Amendment) Bill doesn’t only focus on Hindu migrant. But, six migrant minority communities who have faced the brunt of partition. If its main aim would have been to divide the country on religious lines, they would have simply allowed only Hindu migrants to apply for citizenship.

Pakistan was made on the basis of two nation theory, India has always been secular and will continue to be secular.

Myth: Bengali Hindus will become a burden on Assam

Fact: The CAB is applicable across the entire country leaving the ILP region. The migrants will be staying across the union of India and not only in Assam

Myth: Citizenship Amendment Bill is against the interest of indigenous people of Assam

Fact: The CAB is not only centred to Assam. It is applicable to the entire country. The Government of India writes that “Citizenship Amendment Bill is definitely not against National Register of Citizens (NRC), which is being updated to protect indigenous communities from illegal immigrants.”

How to date a Scorpion Man – The Complete Guide

Why Google Stadia Could Shake Up the Gaming Industry?