What comprises the Niagara Falls?

Niagara Falls is the collective name for 3 waterfalls that span the border between the American state of New York and the Canadian province of Ontario. The names of the three waterfalls that comprise the Niagara falls are Horseshoe Falls, American Falls, and the Bridal Veil Falls.

These falls form the highest flow rate of any waterfall in North America that has a vertical drop of more than 165 feet (50 m)  and they are considered as the biggest waterfall in the world.

Horseshoe Falls is the largest of the three. The 170 feet tall and 2700 feet wide Horseshoe Falls is located on the Canadian side of the Niagara Falls, between Goat Island and Table Rock. It is a great source of Hydraulic power. Its name might be due to the reason that its crest is shaped in the form of a Horseshoe. 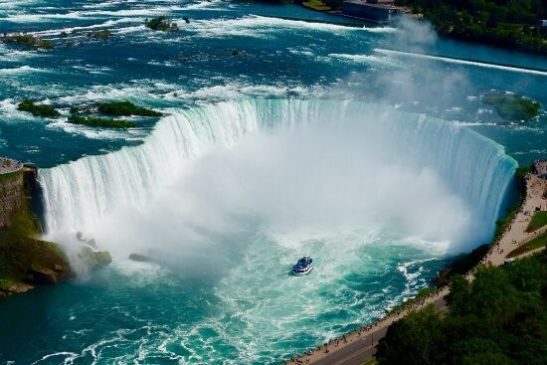 American Falls is the second largest. It is a landmark waterfall in the Snake River. The 110 feet high and 940 feet wide Falls is located in the United States. It is in the shape of a modified ‘W’. 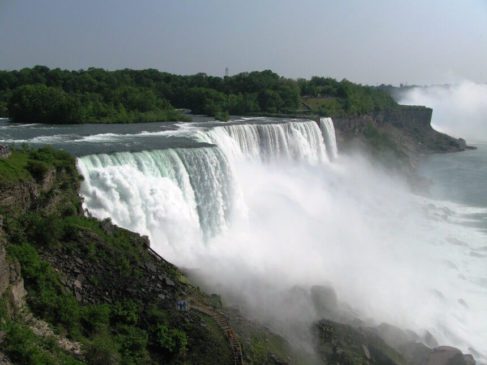 The Bridal Veil Falls which is also known as Luna Falls and Iris Falls is the smallest of the three waterfalls that make up Niagara Falls. It is located on the American side of the waterfalls. Luna Island separates it from the American Falls and Goat Island separates it from the Horseshoe Falls. It is called as Bridal Veil Falls because it resembles a Bride’s veil. 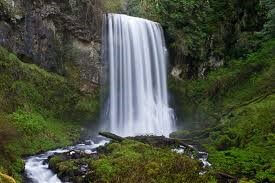 Colour of the water in Niagara Falls

The verdant green colour of the water flowing over the Niagara Falls is a byproduct of the estimated 60 tonnes /minute of dissolved salts and the finely grounded rock generated by the erosive force of the Niagara River.

Where is Niagara Falls?

The falls lie within the Niagara Falls State Park which is the oldest state park in the country and includes an observation tower, a museum, movie theatre, gift shop, nature trails and much more. It allows access to the Cave of the Winds and Goat Island.

The site of the Niagara Falls was a shallow sea which covered most of North America over 600 million years ago.

How to reach Niagara Falls?

You can reach the Niagara Falls from the Buffalo-Niagara International Airport, Buffalo which is 30-40 minutes away from the falls.  It serves New York, Buffalo and Southern Ontario (Canada). The popular airlines serving the airport are Delta Air Lines, United Airlines, JetBlue Airways and Southwest Airlines. Niagara Falls International Airport is closer to the falls, but it is served only by DirectAir, charter, and private flights.

From the airport, you can reach Niagara Falls by Bus, Cab or Rental car and bike services. If you choose to travel by bus, Route 55T (the Trolley) of Niagara Frontier Transportation Authority and Route 210 run frequently through downtown Niagara Falls and also connects the city to the Niagara Falls International Airport. The popular cab services are Niagara Falls Taxi, Blue United Taxi, AA Falls Taxi Tours etc.  There are several car rental agencies like Enterprise Rent-A-Car, Hertz, Budget, etc in Niagara Falls, providing both self-driven and chauffeur-driven options. There is ample parking at the Niagara Falls State Park. The excellent network of bike paths in the city, make it a great place for traveling on the bike. Beeton’s Cyclery, Old Falls Street, and Precision Bicycles are some of the bike rental agencies.

What is the best time to visit Niagara Falls?

Niagara Falls experiences hot, humid summers and cold, snowy winters. The first few weeks of September is the best time to visit the Niagara Falls as the crowds are lesser and it still stays warm. If you are lucky, you can witness a rainbow forming over the Falls. The Falls get frozen in the Winter, It is a beautiful sight to behold, but you cannot do many of the activities. 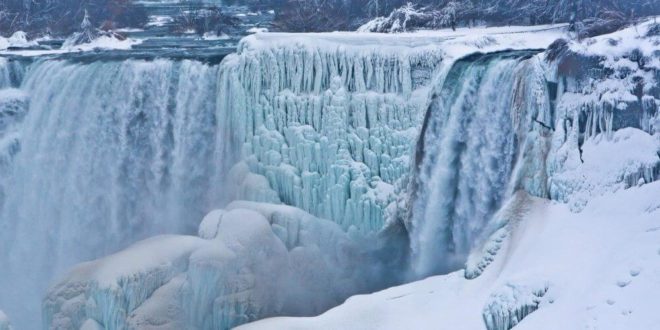 Why is Niagara Falls important?

The Niagara Falls receives between 10 to 20 million visitors every year. 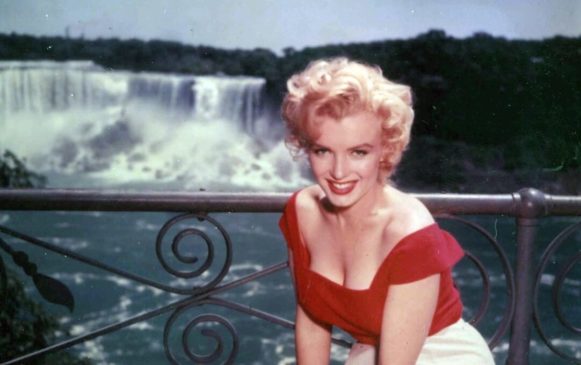 A still from the movie Niagara (1953) starring Marilyn Monroe

Niagara Falls’ rich history and its popularity as a tourist destination make it a cultural destination. The Niagara Arts and Culture Centre (NAAC) features a variety of arts like painting, sculpture, theatre, dance, etc. There are art galleries, museums, and venues for live music and theatre. There are festivals and fairs celebrated here throughout the year like Niagara Frontier Art Exhibit, Erie Canal Fishing Derby, Concerts in the Park, etc. 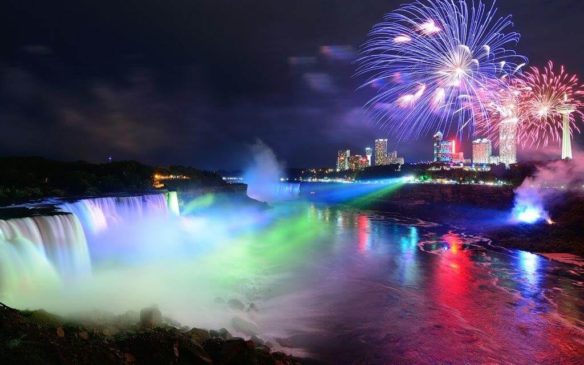 The Ontario Power Generation Winter Festival of Lights is Canada’s largest illumination festival and the premier illumination festival in North America, attracting over 1.5 million visitors and 450 motor coaches annually. It was founded 36 years ago in 1982. This year’s winter festival of lights will happen from November 3, 2018 to January 31, 2019 in Niagara Falls, Ontario.

Places to visit in Niagara Falls:

If you have only one day to spend in visiting Niagara Falls, here are some of the places you should include in your itinerary:

Cave of the Winds: The Cave of the Winds (originally called Aeolus’ Cave, after the Greek god of winds) is a natural cave behind Bridal Veil Falls at the Niagara Falls. An elevator takes people from the area between the American and Canadian Falls down to the level of the Niagara River at the base of the American Falls. It offers a series of walkways and P: ponchos to experience an up-close and wet view of the Bridal Veil Falls. 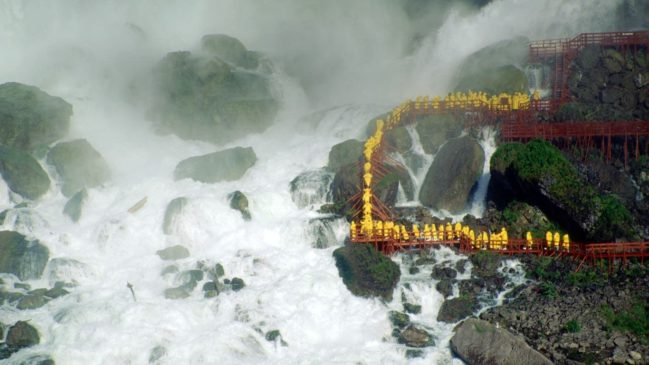 Niagara Falls State Park: Niagara Falls State Park which is the oldest State Park In the united states is in the City of Niagara Falls in Niagara County, New York, United States. It offers a view of the American Falls, Bridal Veil Falls, and the Canadian Falls and it overlooks the Niagara Gorge and allows access to the Maid of the Mist tour boats, Cave of the Winds, Goat Island, the Prospect Point Observation Tower, a statue of Nikola Tesla, and the IMAX movie Niagara: Miracles, Myths and Magic which is shown at the Niagara Adventure Theater. The park also offers a museum, food concession, a movie theatre, a gift shop, fireworks, hiking and nature trails, picnic tables, recreation programs, and fishing. The Top of the Falls Restaurant, on Goat Island overlooking the Horseshoe Falls, is also available within the park Journey behind the falls: It is an attraction in Niagara Falls, Ontario, Canada located in the Table Rock Centre beside the Canadian Horseshoe Falls. It is open year-round and run by the Niagara Parks Commission. The best time to visit is in the morning when the crowds are less. 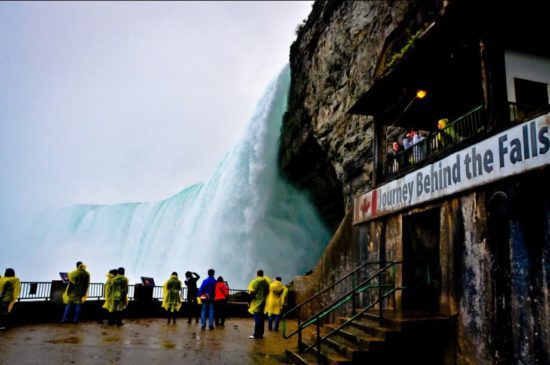 Skylon Tower: It is an Observation tower featuring sweeping vistas of Niagara Falls, an arcade, a revolving restaurant. 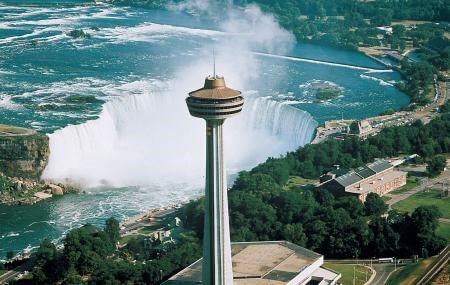 Niagara Sky Wheel: It is a 175-foot tall Ferris wheel in the middle of Clifton Hill, Niagara Falls, Ontario, Canada. The ride is approximately 12 to 15 minutes long, giving passengers views of the Niagara River, and the Horseshoe Falls and American Falls, and is open all year, from 9:00 am to 1:00 am.

Visitors to Niagara Falls may purchase the Discovery Pass, a guest pass that allows them to enter several attractions at a smaller price. As of 2016, the ticket provides admission to the Cave of the Winds, Maid of the Mist, the Niagara Adventure Theater, the Niagara Gorge Discovery Center, and the Aquarium of Niagara. The ticket also provides discounts for Fort Niagara and entitles the holder to free gifts at Artpark and the New York Power Project Power Vista. Its price is $46 for adults and $35 for children.

Hope you have a good time visiting the most impressive Waterfalls in the world with your family.

Niagara Falls is 1 of my favorite spot in Canada! Did you have a chance do zip line?

I love visiting Niagara Falls. Everyone needs to experience it

Sure, Its must visit place for everyone. Stay tuned with us for more such posts.

The Niagara Falls look breathtaking when they’re frozen over. I’ll have to check them out next time I visit the East Coast. Thanks for sharing.