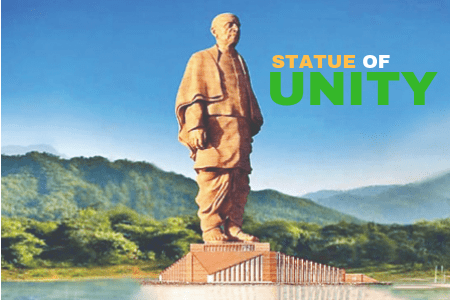 The Statue of Unity, a 182-meters tall tribute to Indian freedom fighter Sardar Vallabhbhai Patel, will be inaugurated on 31 October. Statue of Unity is the tallest statue in the world(597 ft). Then Chief Minister of Gujarat Narendra Modi (currently The Prime Minister Of India) laid the foundation stone of statue on 31 October 2013, the 138th birth anniversary of Sardar Vallabhbhai Patel. After 5 years, The engineering marvel is set to be revealed on 31st October 2018. Here all the things you need to know about World’s tallest Sardar Patel’s Statue Of Unity.

The statue is being built in the state of Gujarat. It is located at the Sardar Sarovar Dam on the Narmada river. The dam itself is considered to be one of the largest structures standing at a height of 42 meters. It is approximately 200 km from Ahmedabad, Gujarat’s largest city. 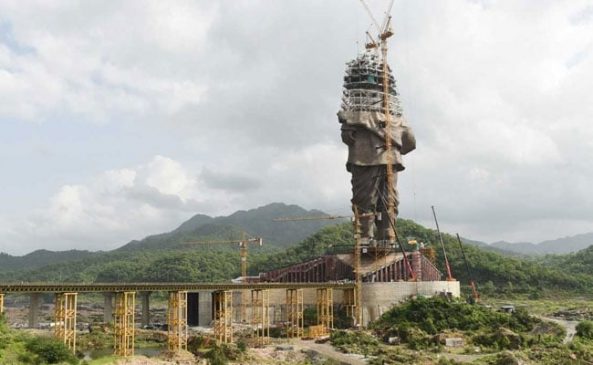 The significance of Sardar Patel and Statue of Unity

The moment statue represents the Indian Independence movement leader and the First Home Minister and  Deputy Prime Minister Of India Sardar Vallabhbhai Patel popularly known as Sardar Patel. He is also known as “Iron Man Of India”. He was an Indian Barrister and statesman, a senior leader of the Indian National Congress and a founding father of the Republic of India who played a leading role in the country’s struggle for independence and guided its integration into a united, independent nation.

In India and elsewhere, he was often called Sardar. He fought for the self-rule and an independent right. He played a significant role in persuading feuding states to unite to become part of the Indian State after independence in 1947. The Statue of Unity is named for his struggle for India to make it a United Country. He is the one who won over British leaders in the Bardoli Satyagraha. Even today he is remembered as the man who united India.

Also Read -   Indian soldiers who sacrified their life for the country!
Powered by Inline Related Posts
The big moment is here! India, on Wednesday, will ‘officially’ become host to the tallest statue in the world when Prime Minister Narendra Modi will dedicate to the nation the ‘Statue of Unity’ at Kevadiya in Gujarat’s Narmada district. The statue of Sardar Vallabhbhai Patel, built on an islet ‘Sadhu Bet’ near the Sardar Sarovar Dam, stands tall at 182 meters – it will be inaugurated by the PM on October 31, which is also the birth anniversary of the Iron Man of India.

The Prime Minister’s Office said PM Modi will dedicate the statue that is twice the height of America’s world-renowned Statue of Liberty by pouring soil and water from the Narmada river into a ‘Kalash’. He will then do a ‘Virtual Abhishek’ of the statue by pressing a lever. Soon after, the PM will reach the Wall of Unity (a monument defining India’s unity) for its inauguration. The BJP stalwart will also perform a special prayer at the statue’s feet. 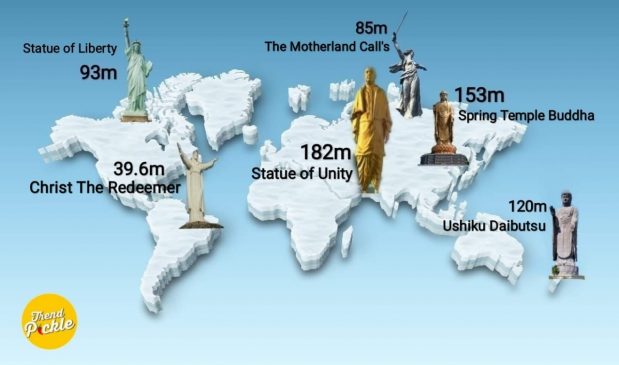 Later, the PM will visit the museum and exhibition, as well as the viewers’ gallery. The viewer’s gallery is located at a height of 153 metres and provides a breathtaking view of the Sardar Sarovar Dam, its reservoir, and the Satpura and Vindhya mountain ranges, as per a report in PTI. As many as can stand on the gallery at one time.

A spectacular flypast by Indian Air Force aircraft and cultural performances would also mark the occasion. As part of the IAF performances, a team of three Surya Kiran jets will fly past leaving behind saffron, white and green colours of the national flag. This will be followed by a flypast by three Jaguars at low altitude. Meanwhile, helicopters will shower flower petals on the statue while the PM pays a floral tribute to Sardar Patel

Finance for the Statue

Construction of the statue

It is constructed with steel framing, reinforced cement concrete, and bronze cladding. The statue needed 75,000 cubic meters of concrete, 5,700 tonnes of steel structure, 18,500 tonnes of reinforced steel rods, 22,500 tonnes of bronze sheets for construction. In the first phase, a bridge connecting the memorial to the mainland, a memorial, visitor center buildings, a memorial garden, a hotel, a convention center, an amusement park, research centres, and institutes is being constructed. 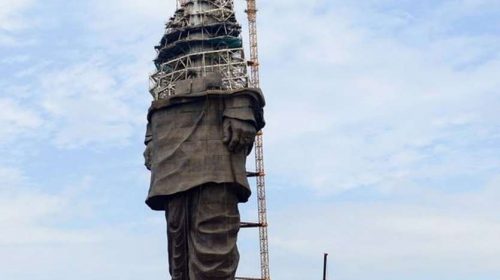 An interesting fact to note about the construction of this engineering marvel is that among the thousands of workers, 200 are from China. These 200 workers have been working in batches for two-three months each since September 2017. The L&T has recommended that Chinese foundry Jiangxi Tongqing Metal Handicrafts Co. Ltd (or the TQ Art foundry) be chosen to mold the cladding, that essentially makes up the bronze statue, as per the report.

1. At a height of 153 m, The Statue of Unity will have a viewing gallery offering an expansive view of the dam and its environments. The Gallery can accommodate up to 200 visitors at one time.

2. The Statue of Unity is able to withstand wind velocity up to 60m/sec, vibration and earthquake.

3. The Statue of Unity comprises two semi-joined and composite concrete cylindrical cores surrounded by a structural steel space to support the exterior cladding.

4. Visitors will be able to see the Sardar Sarovar dam and its 200km long reservoir, Satpura and Vindhya mountain ranges from the gallery.

6. A 3.5 KM Highway is built to connect the Statue of Unity in Sadhu island to Kevadia town in Gujarat.

7. Under Loha campaign,  The iron is collected from various parts of the country. The collected iron is melted, converted to rebar and used in the foundation of The Statue of Unity.

8.  Once open for visitors, The Statue of Unity will generate approximately 15000 direct jobs for tribal people every year.

9. A 3-star hotel facility will food service, guest amenities, and conference facilities is built next to The Statue of Unity.

TOP 20 FEMALE FOUNDERS FROM INDIA AND THEIR NET WORTH