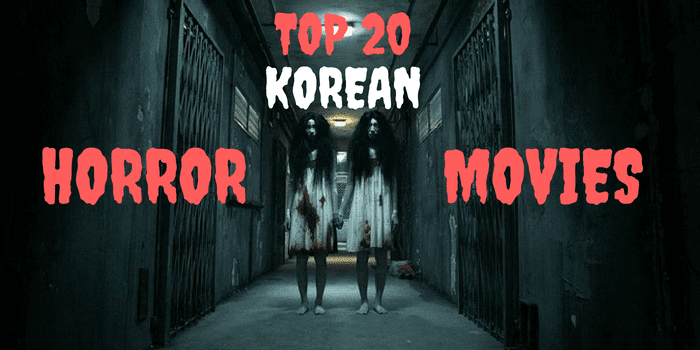 Are you one of them who just can’t resist watching horror movies? Then you must have watched a lot of Bollywood horror movies to bestow you with sleepless nights. But if you want to experience a different kind of horror, then switch to Korean horror movies. Korean movies have always been experimental with horror elements. Horror films in Korea existed since the beginning of the Korean cinema. However, they got popular in the late 1990s. Here is the list of best Korean horror movies that you must check out in 2018.

So what are you waiting for? Just turn off the lights (if you can) and start watching these classic and cult top Korean horror movies.

List of best Korean Horror Movies of all time –

I Saw the Devil is a horrifying story of murder and revenge including a lot of violence, goriness, and cannibalism that surrounds Kyung-Chul, a dangerous psychopath who kills for pleasure. But one day, the murder of a pregnant woman turns everything upside down for him. This eventually change the chaser to be chased

Watch I Saw the devil Trailer:

Train to Busan is a classic Korean horror movie about zombies where passengers turn into zombies in a running train. Seok-woo boards a train with his daughter, Soo-an that is going from Seoul to Busan. Suddenly, the apocalypse begins, and most of the population turns into flesh-craving zombies. While the train is heading towards Busan, the passengers have to fight for their lives against the zombies – and each other. This is a must-watch horror movie for zombie obsessed minds.

The Wailing is a disturbing horror movie in which a stranger arrives in a small village, Goksung in South Korea only to discover a mysterious disease that starts spreading in the village. A police officer Jong-Goo is drawn into the incident to investigate bizarre murders caused by the mysterious disease. Suddenly his daughter goes missing. NowHe has to solve the mystery to save his daughter.

Bedevilled is an excellent piece of crime drama. Hae-won is a beautiful single woman working at a bank in Seoul city. She has to take a vacation so she heads for Moodo, a small island. She has a friend there named Bok-Nam who often writes to Hae-won asking her to visit. Upon arriving at the island, Hae-won is shocked to see that Bok-Nam is subjected to mental, physical, and sexual abuses. She begs Hae-won to help her escape the island. But will she be able to help her escape?

A Tale of Two Sisters is a Korean psychological thriller movie about two sisters as the name suggests, both return to their father’s home and encounter a cruel stepmother. Even after spending time in a mental institution their suffering isn’t over. They have to face disturbing events because of their stepmother and ghosts haunting their house. All the events eventually connects to a dark past in the family’s history.

Thirst is a dark-comedy vampire-love-story that has everything in it be it Jaw-dropping violence, goriness, great humor, incredible suspense, or intimate realistic sex scenes. It revolves around Sang-Hyun, a priest, who works for a hospital. He volunteers for a secret vaccine development project intended to eliminate a deadly virus. However, the virus eventually takes over the priest. He nearly dies but recovers miraculously by infusion of vampire blood. Eventually the sole reason for his living becomes the pleasures of the flesh. Now the priest is affected with vampirism. Can he abandon his ascetic ways?

The Quiet Family is a superb comedy horror film that surrounds the family who decides to open a lodge in a remote hiking area. The first customer of the mountain inn commits suicide. The family gets upset and they bury his body to avoid any bad publicity. Suddenly all their guests befall horrible fates and the bodies start piling up. Will the family fix the situation or fall prey to something horrible?

The Host is an entertaining monstrous horror movie that revolves around Park Hee-bong who lives with his two sons, one daughter, and one granddaughter and runs a small food joint on the banks of the Han River. The Parks seem to lead a quite ordinary and peaceful life. But to ruin the peace, one day a monster emerges from Seoul’s Han River and starts attacking people. The granddaughter Hyun-Seo is taken by the monster. One victim’s loving family does what it can to rescue her from its clutches. Can they find Hyun-Seo? Is She still alive? The family has to hunt down the monster and save Hyun-Seo.

Three… Extremes is an Asian horror film collaboration consisting of three segments – Dumplings, Cat, and Box. Each segment has been directed by different directors in three different countries, adding versatility. Also, it is a sequel to the movie Three (2002) and follows the same concept. The three short films are unique and memorable. I found Dumplings to be the most effective however all three are pretty good films.

Hansel and Gretel is a fantasy horror film set in an isolated creepy atmosphere. Eun-soo meets with a car accident on a mystical lonely road. To get help he follows a mysterious girl with a lantern to a beautiful house that has bizarre secrets, creepy children and not to mention no way to escape.

Thanks for this wonderful list which i been looking for. Your list is helpful to find and dfownload some good horror korean movies.

Thanks for sharing this worderful information, it is really helpful

I haven’t seen a lot of Korean movies but I saw Train to Busan because it was quite famous. It was quite fun to watch! I haven’t tried the others on the list, but I think I will…

Oh wow! No horror movies for me, Korean or English! Yikes!

i absolutely loved train to busan and thought it was really cool!

I love Asian horror movies especially Korean and Thailand horror movies I would love to check all of this! I will save this post! thanks for sharing

I haven’t seen but all look so scary!! Thanks for sharing list

I just know there is korea horror movie

WOW Korean horror movies look kind of scary. I am intrigued I will be open minded and watch a few.

Best list to feed my Koreaboo soul. Thanks for sharing.

I’ll have to check some of these out. They look super scary just from the pictures.

can’t watch this kind…….will refer this to my friend who can do normal things like eating and laughing while watching these….

I love Korean tv series and with this post, my next movie bucket list is now full from your post. Will definitely watch everything you’ve cited here.

oh my god! 😀 I am very scared of ghosts and I do not watch horror movies.

These are great suggestions for people who enjoy horror movies. Not me thank you. Horror fans can appreciate this list during this difficult time.

I have never seen any korean movies so far but these sounds interesting!!

I have heard of some of these movies but haven’t seen them. I am more in Japanese horror movies like Ringu. Ringu is actually sad if you read the novel.

Some of these look too scary for me! A Tale of Two Sisters does intrigue me though…

Ooh I love scary movies! Thanks for this list, it will definitely help keep my busy over the next few weeks!

I am not a huge fan of horror movies but my hubby is. will have to share this list with him!

I love a good horror movie! Just from the previous, I can tell I will have to add a lot of these to my list.