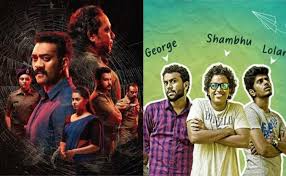 Be it Malayalam movies dubbed in Hindi or Malayalam series, always known for its content. Malayalam web series have been around for a long time, but it’s only recently that they’ve been getting the attention they deserve in India. It has a huge fandom and a dedicated community. The internet has made it easier to find and watch these shows online, so now you can binge-watch your favourite Malayalam web series without breaking a sweat, and the good part is most of these best Malayalam web series are completely free to watch.

We’re always blown away by how relatable the Karikku web series are. Plus Two, the latest installment of their popular mini web series, is no different. It follows the same cast from their other series and takes us back to our school life with quirky and unique content. The series has a similar plot to previous Karikku titles, but with new characters and plenty of laughs.

Plus Two has been released after their well-received Plus Two Free Period YouTube short film and is sure to please fans of both events!

The Othalanga Thuruthu series is set on an island where people are afraid of eating the Othalanga vegetable, which they believe to be poisonous. The series also stars Abin Bino as the protagonist who has been assigned to work with a group of scientists to prove that the Othalanga is not dangerous and that it can be safely consumed by humans.

Mridul Nair’s Instagraamam is a web series in Malayalam with a cast of over 60 actors. It’s the first full-fledged web series in the language, and it has already received acclaim from fans and critics alike. The series is well known for its movie-quality making, as well as excellent performance from all the actors.

The first season consists of 14 episodes, each under 30 minutes. The second season will be released later this year.

Alambanz is a comedy-focused web series that has become incredibly popular since its release in 2019. The series follows the antics of a group of friends and their exploits as they navigate life in the small town of Alambanz.

The main characters in Alambanz also appeared in Karikku’s Thera Para episodes. In fact, many of the same actors played multiple roles within both series. The entire cast performs well, but some improvements could be made to make them even better.

Directed by Anoop Bahuleyan, Premier Padmini is a anecdotal comedy which portrays the attachments of middle and lower middle class to their first ever possessions- a first car ride, first bicycle or a first ever flight experience. Premier Padmini is a metaphor for the constant ups and downs in life, how it is a companion throughout the journey, not abandoning despite. It is a soulful yet a comedy tale, living through the ravages of time.

The show revolves around Akku and his best friend Ikku who are inseparable. They do everything together, go to school together, play games, eat together and even sleep together. However, their lives are not as rosy as they seem because they have different mothers. Akku’s mother is dead while Ikku’s mother lives in another village with a distant father who hardly sees his son.

While Akku’s mother was alive she used to take care of him; however after her death he has been left alone with his father who doesn’t have time for him due to work commitments.

The Royal Princesses of Sheba is a series that has an enormous fan base and who shortly refer to it as RPS. This series is a women-centric series that revolves around the life of three women who belong to different groups of society and all three live together in an apartment. This series has several witty moments that keep the viewers interested all along.

This is an interesting show because it has a unique storyline and interesting characters which makes you want to watch each episode. The storyline revolves around three princesses who are living with their friends in different places but still manage to stay happy and have fun together. It is about how they try to survive their lives after being separated for sometime and how they come back together again after so many years later on.

The characters are very well developed in this show and they have been portrayed by some well known actors such as Fahad Mustafa, Sajidah Qureshi, Sara Loren and Natasha Raheja among others.

If you want to watch a series that beautifully depicts the relationship between a father and daughter, then this is the series for you. The episodes are written well and are engaging. Each episode shows how the two interact with each other and develop a bond.

The series starts off with the father returning home after 14 years of being away, he did not know what to expect from his family. However, he was welcomed home by his wife and kids. He soon realised that his youngest daughter has grown up a lot from the time he last saw her. This made him realise that she has become independent and strong women just like her mother.

The friends in this series are all unemployed. They have been out of work for a while and are starting to have serious problems. Their problems only get worse when they start to take drugs, which is where the series starts.

The friends struggle to find a job. They try to get a job from different companies, but it doesn’t work out. Finally, one friend finds a job at a company that wants him as an intern, but his friends don’t want him to go because it’s too risky.

They try to convince him not to go, but he doesn’t listen. The four friends finally realize what they have done wrong and decide that they need to make amends with each other before their problems get any worse.

This story revolves around a man and woman who have been separated by circumstances. The woman raises the child of the man she loves, and the man enjoys his life with another woman. The child grows up learning about his mother and father, but does not know which one is his real mother. He sets out to find out how he came to be, and what it means to be himself.

What if, after all the love and commitment you’ve made to your partner, you found out that you were being deceived? What if you couldn’t trust them anymore?

It’s a reality that many people experience in their lives. These are the situations that [series name] tackles. It’s a romantic web series with a beautiful screenplay, brilliant plot, and stunning performances. It’s because of these aspects that this series is touching millions of hearts.

It is a comedy-centric web series, made by Flowers TV, with a total of 8 episodes. Double Decker has an exquisite and a subtle innocent comedy, with a tinge of precise craftsmanship. It is available on YouTube as of now.

The story begins with Bhanu being given an opportunity to be transferred to the city of Bengaluru by his employer. He was quite excited about the prospect of living in the city. However, he was worried about leaving his family behind. His mother was extremely sad and upset at the thought of him leaving her alone in their village, but eventually she agreed to let him go.

Honey Boss is a web series that centers around the life of a young man named Pravin, played by Sajith Sridharan. Pravin has just graduated from college and is now working at a small grocery store in his hometown. He is happy with his job and his life, until one day he finds himself being fired.

Pravin is extremely talented at making sweets, so when he gets fired from his job he decides to create a business out of it. The business starts off small but quickly grows into something much bigger than Pravin could have ever imagined.

Hyder is a latest malayalam political drama web series. It is about the life of a politician who was born and brought up in a village. The story revolves around his struggle to achieve his goals and rise to power. He has to fight for his love, family and religion.

Hyder has been directed by Sajeev J K, who previously directed the movie Chathrapathra.

Which is your favourite malayalam web series? Let us know in the comments section!

Most beautiful routes for hiking in France