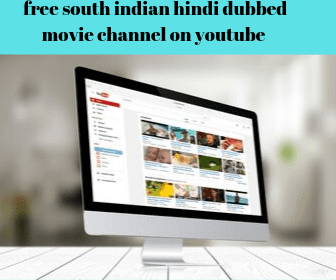 Watching south Indian superstars always fills us with lots of joy and zest. We fall in love with their actions, dialog delivery, way of romancing with actress, their way of doing everything. Once we complete the movie, it takes two to three days to get out of those movies because of their entertainment factor & dialogues which gets into the audience minds very rapidly. For an example, you can see dialogues like “Katappa ne baahubali ko q maari” or the latest on “Jhukega Nahi Saala” from Allu Arjun’s movie Pushpa.

If you are planning to watch some Hindi Dubbed South Indian movies but doesn’t have OTT subscriptions, don’t you worry, most of these best South Indian Movies are available on YouTube for free & only a click away for you to watch. We have listed, here, some of the prominent YouTube channels where you can watch Hindi dubbed South Indian movies for free. What are you waiting for? It’s time to binge-watch.

Goldmines Telefilms is one of the finest destinations for entertainment content on YouTube with a collection of more than 5300 videos on their channel. It is the one-stop destination to watch new release South Indian movies dubbed in Hindi along with full-length blockbuster Hindi movies, songs, comedy scenes, and much more.

Action Ka Baap is yet another one-stop destination for South Indian (Tollywood) movies dubbed in Hindi, with a collection of more than 300 movies. It focuses mainly on action movies, as the channel name suggests. Be sure to find the most unbelievable, bone-crunching, skull-cracking, cult action videos that prove physics wrong.

Premium Digiplex Movies is another destination to watch movie content, be it full-length Hindi movies, South Indian movies, and South Indian movies dubbed in Hindi. The channel holds a collection of more than 200 such movies that cover different genres.

This channel, WAM India Movies is a household name when it comes to South Indian movies. This channel is known for sourcing movies from all the film industries within the country, like Mollywood, Sandalwood, Bollywood, Kollywood, and Tollywood. This plethora is available 24 hours for the audience in this channel. The most-watched stars are Rajinikanth, Kamal Haasan, Nayanthara, and Namitha. The genres also range from horror, comedy, family, drama, fantasy, mystery, history, sci-fi, thriller, and western.

The name, Aditya Movies stands for RK Duggal, and they are a production house based out of Mumbai. This production house is involved in production, acquisition, and distribution. Their core job is to acquire movies that further get dubbed and distributed to various digital platforms and satellite channels. RKD deals with media rights in all kinds of electronic media which include, satellite broadcasting, mobile, internet, etc. RKD has exclusive rights to above 100 movies, produces TV series and advertisements.

Shama Digital Entertainment (SDE) is the one-stop destination for the latest on Bollywood, Tollywood, Kollywood, Sandalwood, and Mollywood Movies for you to entertain 24 hours. From Rajnikanth to Shahrukh Khan to Mohanlal, they have listed all. Be it watching the latest updated movies, new songs, an old super hit movie, and all in an endless thread of entertainment in their YouTube list. From horror, comedy, family, crime, drama, fantasy, mystery, history, sci-fi, thriller, western to any new trend they have uploaded it all and has a library of more than 100 videos.

The channel, Cinekorn Movies mainly focuses on content acquisition and distribution. Once acquired they provide a list of South movies dubbed in Hindi and the collection is around 350 movies.

Cine Sumeet Arts is a Joint Venture Between Sumeet Arts and Cinekorn Entertainment. Their YouTube channel contains all new and super hit South Indian movies dubbed in Hindi and has a collection of more than 100 movies.

So what are you waiting for? Go ahead and start binging on these movies for free online and check out the superstars of the south.

The channel, Goldmines Action is a part of the Goldmines fraternity specialized in South Indian action movies dubbed in Hindi. It has almost 350 free videos to offer to the audience.

Do you know any other YouTube channel which has good number of South Indian Movies dubbed in Hindi? Let us know in the comments section!