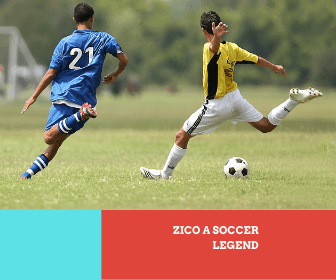 Arthur Antunes Coimbra, known as Zico, was born on March 3, 1953. He came from a low-income family in the suburbs of Quintino, Rio de Janeiro.

He is a famous Brazilian player and one of the best midfielders in the world ever. Plus, he is a midfielder who used to wear the number 10 (number of legend Pele).

As a teenager, Zico was brought to try out for Flamengo Celso -a radio broadcaster named Garcia. For time Zico gradually became one of the most admired players in football history.

Even Pele listed Zico as one of the 125 greatest contemporary players in March 2004. Zico is considered the best Brazilian player after Pele and Garrincha.

As a football player

When Zico was at the Flamengo football club, he was a significant factor to help the club win the Copa Libertadores and the Intercontinental Cup in 1981.

Zico when at Flamengo football club. Image via https://fun88gg.com/

People said that Zico could score in unimaginable ways; he was famous for his ability to cover all the pitch. He can play with both feet and is an expert at free-kicks.

Zico moved to play for the Italian Udinese club from 1983 to 1985. At this time, Zico helped the Udinese club to become one of the strongest teams in Italia. However, the club failed to win major tournaments, and in the end, Zico returned to his old football club Flamengo.

Zico suffered a knee injury after a collision with the defender Marcio Nunes of Bangu in 1986, so he had to take a few months off.

Zico still attended the World Cup shortly after although he didn’t completely recover from injury.

At that biggest tournament in the world, he missed a penalty score in a match against France. The main game ended with a tie, and two teams had to take a penalty shootout 11m. After Socrates and Júlio Césam missed their penalty kicks, Zico scored successfully and became a hero to bring victory to Brazil.

In 1987, Zico recovered entirely from his injury, and he helped Flamengo Club ranked fourth in the national championship.

After all, Zico retired in 1989. He is always known as the best player in the history of the Flamengo Club.

At Brazil’s first presidential election, Zico was chosen as the Minister of Sports.

Zice made an essential contribution to Brazilian soccer during the first year, building law regarding the commerciality of domestic clubs.

In 1991, Zico resigned from his political position to coach for Kashima Antlers Football Club in Japan. He helped the Kashima to become one of the strongest football clubs in Japan.

Zico plays an important role in developing the Japanese football industry. Everybody in Japan loves him; and his statues are built everywhere in the Japan public square.

Statue of Zico in Japan

He replaced Philippe Troussier to become the coach of the Japanese national team in July 2002.

He led the Japanese team to win the Kirin Cup (the annual Japanese tournament sponsored by the Kirin Group), the Asian Cup in 2004 and helped the team qualify for the 2006 World Cup. After 2006, Zico didn’t work as the coach for Japan national team anymore; he became the coach for other clubs in Japan, India, and Greece.

I bet that you haven’t heard all these things about Zico. Let’s take a look:

1. Zico’s family has three professional players. And one of his brothers is Edu, known as a talented midfielder. Unfortunately, Edu played at the time of Rivelino and Pele, so not many people remember about him. Edu had been Brazil’s coach for three matches in 1984.

2. Zico joined the Flamengo youth team at the age of 14 in 1967; he almost got rejected because he was too thin; he was less than 1m50 tall at that time. However, the club saw his potential, and they gave him a unique personal training and nutrition regimen. Luckily, Zico reached a height of 172m later.

3. Although Flamengo’s fans always respect Zico, they still love to joke Zico by singing “Happy Christmas” to celebrate his birthday (March 3). For Zico, he admitted one time that he felt not very comfortable with this joke.

4. Zico resigned as a Brazilian Minister of Sports after 13 months. The main reason is that he couldn’t stand the pressure of many politicians and sports officials. They demanded that the Parliament delay the adoption of the reform project and modernize the Brazilian football industry.

5. Zico is the player who scored the most goals at the famous Maracana Stadium. In total, he scored 333 goals in 435 games.

6. Zico is just a short name of his name. His name was Arthur Antunes Coimbra, and at home, everyone called him by the familiar name “Arthurzico,” and Zico is another shorten version.

7. Zico has a nickname which is O Galinho (the rooster in Portugues). Waldir Amaral coined this nickname due to Zico’s hairstyle at the beginning of Zico’s career.

8. Although he has never won the World Cup, Zico has always been rated as one of the greatest players in this tournament. In the FIFA Player of the Century list, he was the third after Pele and Garrincha among other Brazilian players.

Zico is truly a legend of Brazilian football due to his outstanding performance on the pitch. The most unfortunate thing about Zico is that he was unable to win the World Cup title once. However, for all the soccer fans in this world, Zico is always one of the best mid players in history.

Technology Predictions: How the Industry Will Influence the Sports World in the Future

It’s terrific to see a helpful write-up of some rezl value
to your readers.
It iss actually going on my list of factors I need to replicate
as a neew blogger. Visitor engaement aand
material value are king.
Some excellent suggestions; you’ve unquestionably made it onn my list of people to follow!