The largest fort in India and a UNESCO World Heritage Site – ‘Chittorgarh Fort’ is a must visit place in Rajasthan. It is an embodiment of Rajputana Pride, Warrior Spirit, Love and Sacrifice. The fort is situated in the town of Chittor, Rajasthan and was the capital of Mewar. The city is scattered with battlements and monuments that denotes the battles and bloodshed that took place in the medieval period. The fort has witnessed massive battles and has a great history of Rajput Heroism and Sacrifice. So, this article is entirely dedicated to throw a light on Chittorgarh Fort – History, Interesting Facts, How to Reach and Timings. The origin of the Chittorgarh Fort is traced to the Mahabharata and Pandavas. It is believed that Bhima the second brother among the Pandavas had built the fort. A folk legend in Rajasthan states that Bhima struck the ground there, that resulted in water springing up to form a large reservoir. The water body presumably formed by Bhima is an artificial tank known as Bhimlat Kund. 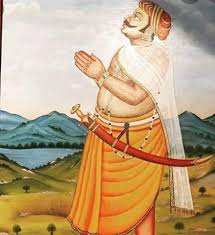 The fort is popularly remembered and known for the Seige of 1303 when the Delhi Sultanate ruler Alauddin Khilji led an army to conquer Chittorgarh, which was ruled by the Guhila King Rawal Ratan Singh also Known as Ratan Sen. It is said that Alauddin Khilji coveted Rani Padmini because of her beauty and invaded Chittorgarh to capture her. The guhila king was killed in the battle and Rani Padmini along with other women performed Jauhar (mass self-immolation). Alauddin won the battle and the fort and appointed his son Khizr Khan as the ruler of the fort. He also renamed the fort as Khizrabad. At that time his son was very young, so the administration was handed over to a slave named Malik Shahin. Hammir Singh and His Successors

Later in 1311 AD Khizr Khan was pressurised by the Rajputs and was forced to handover the power to Sonigra chief Maldeva, who ruled the fort for 7 years. Rana Hammir Singh took over the control of the fort from Maldeva. Rana Hammir Singh made Mewar a large and prosperous kingdom before his death. The kingdom of Mewar progressed in wealth and prosperity and his dynasty came to be known as Sisodia dynasty. Rana Hammir singh’s son Ketra Singh succeeded him in 1364 and he was succeeded by his son Lakha Singh in 1382. Rana Kumbha was the famous grandson of Lakha Singh and he took up the throne in 1433. 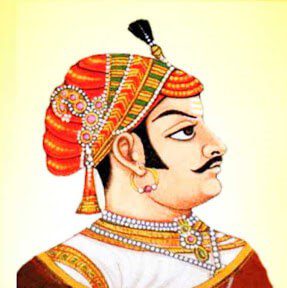 Under the rule of Rana Kumbha Mewar dynasty prospered into a stronger military force. Due to which everyone’s eye was on the fort. Unexpectedly, Rana Kumbha’s own son Rana Udaysimha killed his father to ascend the throne. On 16 March 1527, one of the descendants of Rana Udaysimha lost a battle against Babar and the Mewar dynasty grew weaker. Taking this as a Golden opportunity, Bahadur Shah of Muzaffarid dynasty sieged the fort in 1535. Once again, there was bloodshed battle and jauhar was performed.

In the year 1567, Emperor Akbar had a desire to capture entire India and establish his rule. He even had an eye on the Chittorgarh Fort. Rana Rana Uday Singh II of the Mewar dynasty was ruling Chittor at those times. Many Kings were accepting their defeat in front of Akbar as he had humongous army and power. But there were few kings who decided to fight it out and rana Uday Singh II was one of them. This led to a huge war between the Mughal emperor and the army of Mewar. After a bloodshed battle that lasted for months, Akbar defeated Rana Uday Singh II’s army and took over the ownership of Chittorgarh and he fort.  After that the fort remained with the Mughals for a long period of time.

In the year 1616, Jahangir and Amar Singh signed a peace treaty among the Mughals and Rajputs and Jahangir gave back Chittorgarh and the Fort to Amar Singh.

The Pride of Rajasthan – Chittorgarh Fort stands tall on 180 meters high hill and the fort is spread over an area of 700 Acres. There are huge seven gates, safeguarding all the entrances. The main gate is called as Ram Gate. The fort comprises of 65 structures including temples, palaces, memorials, and water bodies. There are two prominent towers within the premises of the fort named Vijay Stambha (Tower of Victory) and Kirti Stambha (Tower of Fame). The construction of the fort portrays the pure Rajput style with few sultanate architectures.

Gates of the fort The seven gates are named as Padan Pol, Bhairon Pol, Hanuman Pol, Ganesh Pol, Jodla Pol, Laxman Pol, and the main gate is Ram Pol. The seven huge gates are partly surrounded by hexagonal or octagonal towers. The seventh and final gate leads directly into the palace area, which comprises of a variety of residential and official structures. There is a circular road within the fort that links all the gates and gives access to the various monuments including the ruined palaces and 130 temples in the fort. The top of the gates consists of notched barricades for archers to shoot at the enemy army. The doors of the gates have pointed arches to fend off elephants and canon shots. There’s a joined gate called as Jorla Pol that is linked to the base of Lakshman Pol. It is also said that such kind of feature is not seen anywhere else in India. Also, there’s a gate at the northern tip of the fort known as Lokota Bari and in the southern end there’s a opening where criminals were thrown into the abyss. 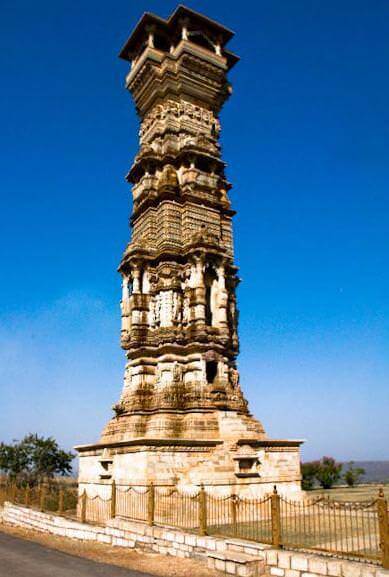 The Tower of Fame called as Kirti Stambha is a 22m high tower that is embellished with Jain sculptures on the outside. The twer was bulit by a Jain merchant named Jeeja Bagherwala during the reign of Rawal Kumar Singh to mark the glory of Jainism. The tower is dedicated to Adinath, the first Jain Tirthankar. The tower has 7 storeys with a narrow stairway. The Ground floor consists of figures of various Jain Tirthankars also known as Digambara monuments. The Tower of Victory ‘Vijay Stambha’ is a 9 storeyed tower built by Maharana Kumbha in in between 1458 and 1468 AD to commemorate his victory over Mahmud Shah I Khalji, the Sultan of Malwa, in 1440 AD. The tower is graced with sculptures of Hindu deities. The topmost part of the tower comprises of a brief genealogy of the rulers of Chittor and their works. Rana Kumbha had carved the word “Allah” in Arabic nine times in the third floor of the tower and eight times in the eighth floor. The uppermost floor also consists an image of the Jain Goddess, Padmavati. The tower is illuminated in evenong and gives a beautiful view of entire Chittor. 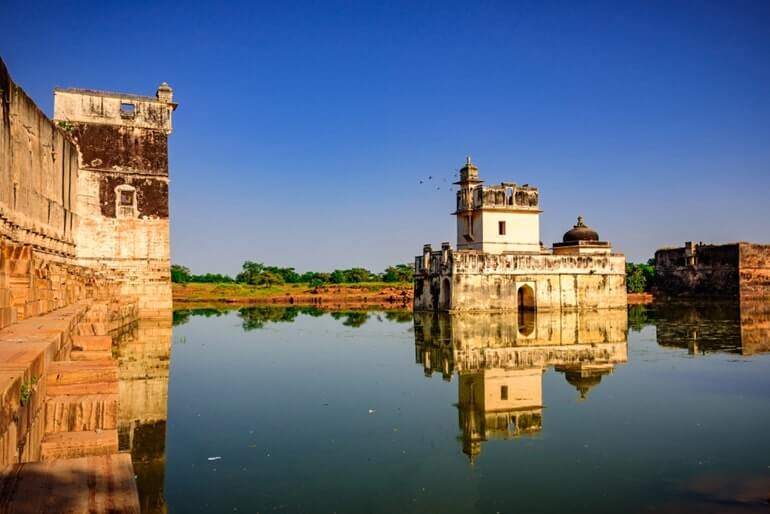 The Padmini palace named after the most beautiful Rajput queen Rani Padmini is a three storeyed structure situated in the southern part of the fort. It is said that in this palace Alauddin Khilji was allowed was allowed to have a glimpse at the mirror image of Rani Padmini, wife of Rawal Ratan Singh. It is believed that this scene was responsible for the massive battle between Allaudin Khilji and Rawal Ratan Singh. The Rana Kumbha Palace stands next to the Vijay Stambha. The palace once served as the main residence of Rana Kumbha and is one of the oldest Structure within the fort. It was made with plastered stones. The palace now is ruined but it is believed that the palace has underground cellars where Rani Padmini and other women committed Jauhar. The palace was also home to famous poetess Meerabai. Also, Maharana Udai Singh, the founder of Udaipur is said to be born in this palace. 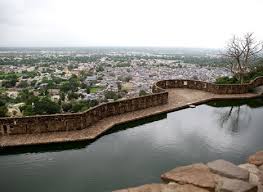 The Gaumukh Reservoir is a deep tank filled by a spring coming from a carved ‘cow mouth’, situated at the edge of the cliff. The gaumukh reservoir is filled with water up till today and is one of the eighty-four water bodies inside the fort. It is also believed that after visiting various holy places in India, its essential for Hindu’s to visit the Gaumukh Kund to complete their holy journey. 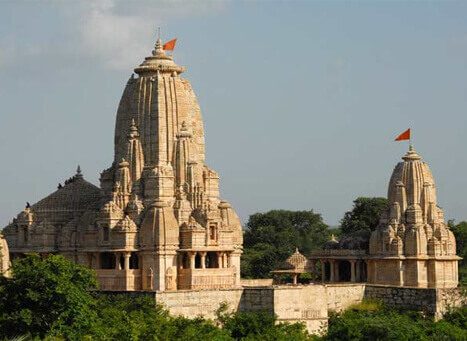 The Meera Mandir is dedicated to Poet Meera Bai. It was built by Maharana Kumbha in the year 1449. The temple comprises of beautiful Idols of Hindu God and the splendid art-work of the temple has made it a famous tourist attraction spot. On the outer side of the Meera Mandir there is a carved statue of five human bodies with one head that epitomises the fact that people of all castes and creed are the same and no differences exists. 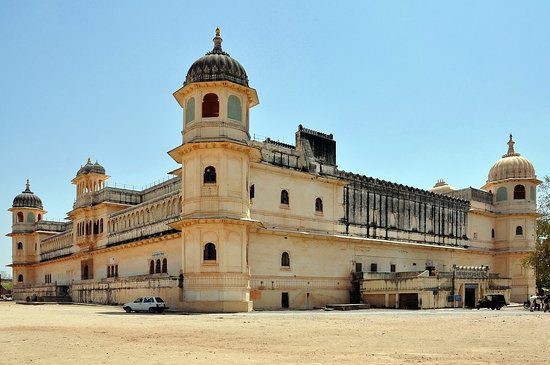 The Fateh Prakash Palace was built by Maharana Fateh Singh. There is a Huge Ganesha Idol in the palace. The palace now is a museum that comprises a rich collection of sculptures from temples and buildings in the Fort. The museum also exhibits various kinds of weapons which includes daggers, old shields, knives, helmets, axes, uniform of soldiers and farsa.  Clay models of local tribes wearing traditional outfits are also present in the museum.

It is said that the fort has witnessed the Jauhar Pratha 3 times. Out of the 3 Jauhar Kund only one is located and that is situated near the Gaumukh Kund. The other two kunds are believed to have a tunnel connect inside the Kumbha Palace and Bhimlat Kund.

At present, there are six jain temples inside the Chittorgarh Fort. The largest among  all of them is the temple of Bhagwan Adinatha with fifty-two Devkulikas.

Chittorgarh fort is also known as Water Fort s it had 84 water bodies out of which only 22 exists in the present.

A Jauhar Mela is held in the fort every year to commemorate Rani Padmini’s Jauhar. Also, the mela is held to mark the bravery of Rajputs and all the three Jauhars that took place in the fort.

The Gaumukh Kund acted as the main reservoir during various sieges that took place in the fort.

Chittorgarh Fort is 200 km away from Udaipur, 300 km from Jdaipur, and 312 km from Jodhpur. The easiest and fastest way is to approach the fort from Udaipur. You can hire a cab or go by your personal vehicle.

The one-mile-long serpentine road to the fort is quite steep and extensive. It takes approximately 2 hours in a cab to reach the fort.

The Udaipur Airport also known as the Maharana Pratap Airport is the nearest airport to Chittorgarh.

Chittorgarh Fort symbolises the Rajput Valour, Love, Sacrifice, and nobility. The fort has such a wonderful history and scenic beauty that you must visit this place at least once to feel the bliss of Rajputana Culture and History.

How to Develop a Successful Enterprise Application ?