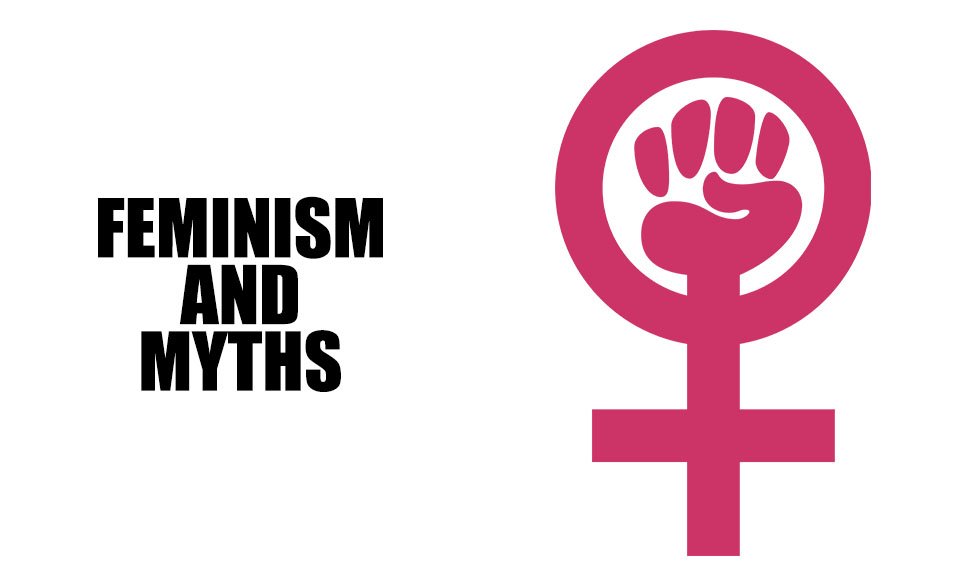 Feminism is a way of establishing equality and fairness between sexes. It questions the gaining priority of a man in society. Many people view feminism in a wrong way. Most people think that feminism is unnecessary and only favors women. They are also of the opinion that feminism will one day overthrow men. These are just myths that need to be done away with. Here are some famous myths about feminism that are about to be busted…

Haha, that’s actually a good one! Feminism is about uplifting women so that they are at par with men in the society. There are people who shudder at the thought of men losing their diplomacy, authority and importance if women become more challenging. Please remember that feminism isn’t about completely substituting women for men. Rather, it voices the need of a peaceful coexistence between men and women anywhere. The world would never have had male feminists if this myth were a fact. All female feminists would have been homosexual. Remember one thing— feminism hates hate.

2. Only Women Can Advocate Feminism

Really? Well if that’s the case, our world would have been devoid of Michelle Obama, Kalpana Chawla, Priyanka Chopra and many other successful women. Forget about the men behind these famous women, under an ordinary circumstance, you will find such men who unconditionally support the women around them. These are the men who are flag bearers of feminism. Why, we also have many mythological men who were true feminists. King Janak, the father of Sita from the Ramayana is one fantastic example. Lastly, who can forget the real ‘Padman’ behind the reel ‘Padman’? — the man who helped thousands of women get access to affordable sanitary pads?

3. Feminism Has Always Been Regressive

You must be blind to the progress feminism has made over the centuries. You can’t ignore the efforts of  Ishwar Chandra Vidyasagar and Raja Ram Mohan Roy in abolishing social evils like Sati and child marriage. Women spearheaded the women’s rights movement in America between the 1800s and early 1900s. Savitribai Phule and her husband established schools for girls. If this isn’t progress, then what is? However, I will also mention that there is still a lot of work to be done for enhancing the overall well-being of a woman. There are still many women who suffer under  the bullshit, so-called rules and regulations imposed by society.

Being a ‘feminist’ and being ‘feminine’ starkly differ from each other. If you are a feminist, you have the choice to be a feminine in your ways. If you are not, that is completely okay. Having ‘feminine’ traits doesn’t mean that you are weak. Many feminist men are often mistaken to be ‘feminine’. Feminism doesn’t demand anyone to be a macho.

Another myth that needs to be busted! An ideal feminist encourages both men and women to do whatever they wish to do. You don’t need permission to wear a bikini or makeup. Such things have got nothing to do with feminism, it is an individual choice. If that was the case, feminism would have intermingled with masculinity and would have failed to exist.

6. Feminism is against Marriage

No feminists would have existed today if early feminists were against marriage. It is an ideology that has passed on from the time of its birth. Feminism is against the oppression that takes place towards women in a marriage. It erodes the belief that marriage makes a woman an ideal woman. This does not mean that single and divorced women are bad.

There are many age-old customs and traditions that hinder women. Many people are flag bearers of superstitions and interpret religion in such a way that women feel degraded. If religious practices are portrayed in a positive way, feminism will not come in the way of religion.

Being homosexual is purely an individual choice. A man or a woman can is free to align themselves towards homosexuality. Feminism is all about being equal and spreading equality.

9. Feminism is not required. It has achieved its goal

This statement is like unseeing the horrors faced by many women. Yes, feminism has achieved a lot but there are still a lot of people who are in the dark. We have to keep marching ahead towards a better society.