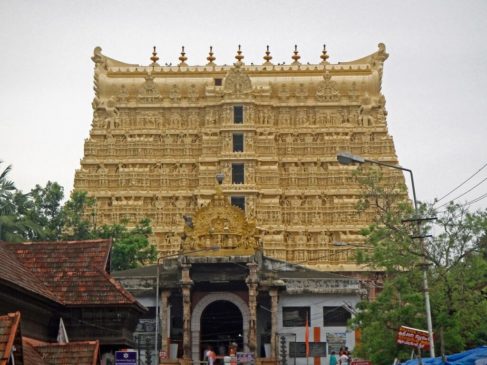 The principal deity Lord Vishnu is enshrined in the “Anantha Shayanam” posture, the eternal yogic sleep on the serpent Adisheshan. Sree Padmanabhaswamy is the guardian deity of the royal family of Travancore. The Maharaja of Travancore Moolam Thirunal Rama Varma is the trustee of the temple. Only those believing in Hindu faith are permitted entry to the temple and devotees have to strictly follow the dress code. Thiruvananthapuram in Malayalam translates to “The City of Lord Ananta” which refers to the deity of Padmanabhaswamy Temple. It is known to be the richest Hindu temple in the world.  The temple has very precious assets including precious metals and precious stones, making it the most wealthy institution and place of worship of any kind in world history. The origin of the Temple of Sree Padmanabhaswamy is lost in ancient times. It could not be determined when the original idol of Sree Padmanabhaswamy temple was made.

The Temple has references in Epics and Puranas. Srimad Bhagavatha says that Balarama visited this Temple, bathed in Padmatheertham and made several offerings. Many hymns praising Lord Padmanabha has been composed by Nammalwar who was a 9th-century poet. Many scholars, writers, and historians believe that this Temple was established on the first day of Kali Yuga which started about 5000 years ago. The legends of the Temple are handed down through the centuries. As per one legend, the idol temple was made divine by a Tulu Brahmin hermit named Divakara Muni. After 950 years of the start of Kaliyuga, the idol was reinstalled.

Secret Vaults and treasures of the Padmanabhaswamy Temple –

The Padmanabhaswamy temple and its secret treasures may remind us of some treasure hunt Hollywood adventure movie like movies of  Indiana Jones. This ancient mysterious temple containing six vaults (now they appear to be eight) has long been covered in mystery. According to an ancient legend, there is an ancient curse on those who try to pass the sacred site. During the 19th-century, treasure hunters tried to open the vault B of the temple. It is believed that serpents came out from one of the vaults as soon as they tried to open vault B. Was the place really cursed or just a myth? We have not yet got the answer to the above question. It was said that any attempts to open the mysterious vault B with man-made technology will result in catastrophes that will occur in and around the temple. Vault B must not be open other than by chanting a specific Mantra.

Five of its six vaults were opened on 27 June 2011. The vaults were opened on the orders of the Supreme Court of India, which was hearing a private petition seeking transparency in the running of the temple.  The committee of seven members appointed by the court has opened the six secret vaults in the presence of the Head Trustee of Travancore Trust of Sri Anantha Padmanabha Swamy temple at Thiruvananthapuram.

At a depth of 20 feet underground, They had discovered approximately $22 billion of treasure including, golden idols, elephants, and idols wearing 18-foot diamond necklaces. The treasure included many bags full of gold coins from across the globe and ceremonial costumes. Some costumes included 66-pound solid gold coconut shells studded with rubies and emeralds.

The temple management authorities were aware of the existence of six vaults. These vaults are situated very close to the middle of the temple.

These vaults have been named as vaults A, B, C, D, E and F for identification purposes.

Two more vaults were identified later on and they have been designated as vaults G and H.

The main vault is Vault B which is said to have treasures double to what was found in Vault A.

What is the secret of the mysterious door of Vault B –

It is believed that this chamber is highly mysterious, sacred and risky by Trust members and other learned Vedic astrologers. The entire world now wants to know what is behind that secret door. According to legends, the door will unlock only when a secret mantra is chanted, as it is believed that the door is locked in that way. The steel door of Chamber B is having two big COBRA PORTRAITS on it and this door has no nuts, bolts or even latches. It is just a plain chunk of steel. As per legends, the vault was locked by using “NAGA BANDHAM” and Mantras by the sages who lived during the reign of King Marthandavarma in the 16th century. The door to such a vault can only be opened by highly learned sages who are familiar with the knowledge of removing “NAGA BANDHNAM” or ‘NAGA PASAM’ by chanting a very sacred and difficult “GARUDA MANTRA”.

According to the legends, if anyone tries to force open this door with “NAGA BANDHAN” on it, then catastrophes are likely to occur throughout the world as it is believed to be cursed.

Many Vedic Astrologers of India tried to open the door by chanting the secret “GARUDA MANTA”, but none of them become successful. If GARUDA mantra is chanted properly by some sage, then vault should open automatically without any human effort needed to open it. As per belief, Garuda drives away mighty serpents from our way and the door can be opened after that. At present No SIDDHAPURSHAS or Yogis or Matrikas can be found in India (or in the world) who could chant highly sacred “GARUDA MANTRA”.

As of now, people can listen to the sounds of water or sounds made by snakes (as guessed by many). Till date, no one knows what exactly is behind the vault. Believers say that the seventh door is an opening where the entire temple and areas may be flooded with waters and some others say, that there are large serpents guarding the area inside which doesn’t allow anyone.

The day to know what’s behind the vault B is still awaited. What do you think, Guys?

Increase Your Flexibility To Enhance Quality Of Your Life!

Just a question… did the locksmith try a non conventional method of locking solid doors with a magnetic locking system… I mean the wonderful people of that area have been know to know a few things about stuff.😉