Taragarh Fort of Rajasthan is undeniably a renowned fort which stands out for its own identity in Bundi, Rajasthan. Built in 1354, Taragarh Fort was the only place to an important generous state when it comes to the Rajput charm and grandeur. Taragarh Fort is a huge fort during the peak of Rajput rulers. It was made the capital of the main princely states. This unique fort is accessible by a sharp road connecting up the hillside towards its entrance, which is decorated with wild elephants. The fort consists of huge pools etched out of hard rock and its Bhim Burj, which is the leading of the walls, on which is built up a renowned cannon. An outstanding bird-eye of the city from this historical fort is one more attraction among explorers.

Dedicated to the desolated wife of Lord Brahma, Savitri.

The temple was built in 1687, on the top of the Ratnagiri Hill behind the Brahma Temple. Both the idols of Savitri and Gayatri are installed here. The idol of Savitri dated back 7 century A.D and Bangar family built this temple in the early 20th century.

It is believed that goddess rested upon this hill on her arrival to Pushkar. The temple has its route through hills, and it takes about an hour to reach the temple. Savitri temple also the best place for enjoying the scenic beauty and view of the lake and its surrounding picturesque villages.

Miniatures of all the Seven Wonders of the World!

Seven Wonders Park in Kota comprises of miniatures of all the Seven Wonders of the World. These include Taj Mahal, Great Pyramid, Eiffel Tower, Leaning Tower, Christ the Redeemer of Brazil, Colosseum, and Statue of Liberty.

It has become a famous tourist spot and attracts thousands of visitors from all over the world. These miniatures have been built on the bank of the Kishore Sagar Lake thereby enhancing its beauty. People flock to the park to enjoy a lovely picnic with friends and family. 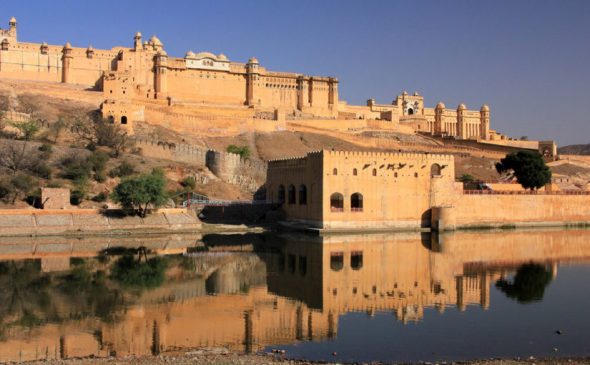 The Ranthambore Fort spreads over an area of 7 kilometres in circumference and includes an area of nearly 4 square kilometres. The fort had many buildings inside of which only a few have survived the ravages of wars and time. Among the remaining ruins, the two pavilions, Badal Mahal, Dullah Mahal, 32 Pillared Chhatri and Hammirs court give an idea of the old grandeur. The Fort also has many cenotaphs, mosques, temples, barracks, step-well, and gates. All around the fort you can see many old ruins with the remnant of walls are mute testimony of past. For water supply, there are two rain-fed reservoirs in the fort. The fort is surrounded by massive stonewalls which are strengthened by towers and bastions. The entire stone for masonry work has been mined from fort area itself and the mines were later turned into ponds for water storage.

The Ganesha Temple is a major attraction of the fort, Thousands of people come here from every corner of the country, and seek blessings from the Lord for happiness and prosperity. A good day to visit the fort is Wednesday, the day of Lord Ganesh when a lot of local people visit the Ganesh temple. One interesting aspect is the mail that is sent to Lord Ganesha consisting mainly of wedding invitations. These letters are delivered daily by the local postman. The Fort is a good place for bird watching. There are large numbers of birds, Langurs, the odd small cat, and elusive Fishing cat uses the area. Entering through the main gate of the completely ruined fort city, one can find temples, palaces, and havelis. In addition, there are four more points of entry to the fort – the Lahori Gate, the Ajmeri Gate, the Phulbari Gate, and the Delhi Gate. At the entrance of the main gate are many Hindu temples such as Hanuman Temple, Gopinath Temple, Someshwar Temple, Keshav Rai Temple, Mangla Devi Temple, Ganesh Temple, and Navin Temple. The Gopinath Temple is built above a 14 ft raised plinth, and yellow stones are used for the exquisite carvings of the temple. The residence of the priest, called the Purohitji Ki Haveli, is located in the precincts of the temple complex. Next in order is the Nachan Ki Haveli (dancer’s palace) and Jauhari Bazar (market place), followed by the Gopinath Temple. The Royal Palace is located at the extreme end of the fort’s limits.

The temples dedicated to Hanuman and Shiv Mahadev are built in the style of cenotaphs rather than temples. Jhiri marble has been used in their constructions, but presently they had been whitewashed. The Muslim tomb found outside the gate of the fort is reported to be that of one of the sons of King Hari Singh. This place is also known as one of the most haunted places in India.

“Abode of tigers”- that’s what the term Nahargarh means! 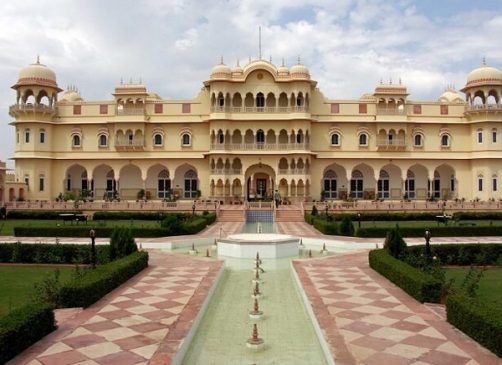 Nahargarh means ‘abode of tigers’. Legend says that the fort was named as Nahargarh after the spirit of a Rathore, Nahar Singh. When the construction of the fort started a strange phenomenon occurred.

Every morning the workers would find the previous day’s work destroyed. This is when the then Maharaja, Jai Singh discovered the land was haunted. They constructed a shrine in which the spirit could reside and named the fort Nahargarh.

The abode of tigers has an amazing view. Earlier it was a lonely place with magnificent structures and a few places to eat. But now the fort is bustling with noise due to the recent opening of the glass palace and wax museum.

The wax museum has many well-known personalities including the likes of Amitabh Bachchan. The museum along with the lifelike replica of many national heroes also has detailed backdrops and well-designed sets.

The Sheesh Mahal was designed to honour the Mughal and Rajput architecture. The significance of this glass palace is that the entire room is made from hand cut glass. Sheesh Mahal in other parts of Rajasthan does not have a glass floor. This is what makes this a unique place to visit.

The fort was originally called Chintamani and was renamed Junagarh or “Old Fort” in the early 20th century when the ruling family moved to Lalgarh Palace outside the fort limits.

Besides having a rich history, the Junagarh Fort is a feat of architecture. The palaces inside the fort, the gardens, balconies, kiosks, etc. depict a composite architectural style which is influenced by the cultural differences of the different rulers and also foreign inspirations. The impressive Junagarh Fort stands with all its regal glory as an epitome of architectural brilliance. The dazzling and exquisite structures of this fort attract thousands of tourists from all over every year. The Pushkar Fair, also known as the Pushkar Camel Fair, or Pushkar Mela, is a colourful and vibrant display of unique exhibitions, exciting competitions, and fascinating events.

Extending to seven days, this annual camel and livestock fair, held in the town of Pushkar between the months of October and November, draws a large number of crowds. Besides, this fair is famous for being one of the world’s largest cattle fairs.

Apart from its celebratory aspect, this wonderful event also possesses a religious significance. Over the years, the fair has found an honourable mention in Rajasthan Tourism.

A pilgrimage site of Sacred Kunds Galtaji Temple is one of the prominent attraction site for tourists in Jaipur. The Temple was built in the 15th century by Diwan Rao Kriparam who was an attendant of Sawai Jai Singh II.

It is also said that Saint Galav meditated in this place for 100 years and pleased by his meditation the Gods blessed this place with surplus of water. the temple has seven water tank and among them the Galta Tank is considered to be the holiest one. People say that taking  a bath in any one among all the tanks of the temple purifies your body and washes away all your sins.

The temple is also well known by the name ‘Monkey Temple’ as different species of monkey are spotted here.

Most Captivating Step Well In India Named after Raja Chanda, Chand Baori is a magnificent step well built somewhere around the 9th century. it is located in the Abhaneri Village. The well is about 64 feet deep and it is also India’s deepest and largest step well with 13 floors.

The well is built in a maze like geometrical pattern so when sunlight falls it looks very captivating. You must visit this place if you are interested in witnessing the immense amount of skills and brilliance of our ancestors. 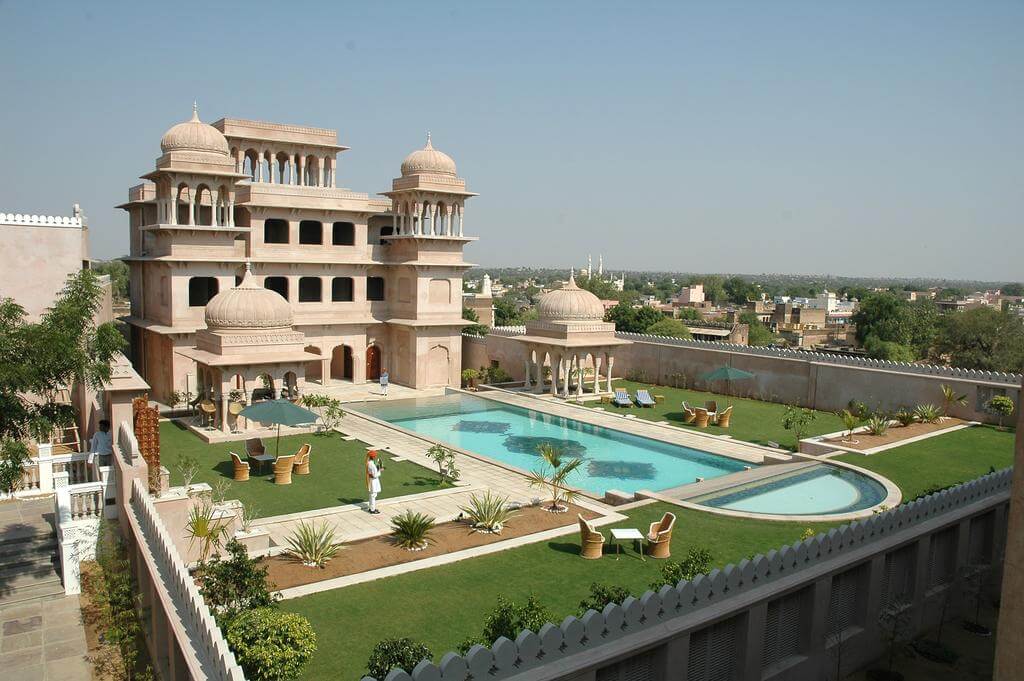 Built by Nawal Singh – the first direct descendent of Shekhawati rukers, the Mandawa fort has a great historical significance. The architecture of the fort is just a treat to watch. The fort displays antiques from the Rajputana Times. Inside the fort there are numerous paintings and mirror work decorations that portrays the beauty of Shekhawati and Rajputana culture.

The fort is also named as ‘open art galleries’ because of the paintings and art works displayed inside. 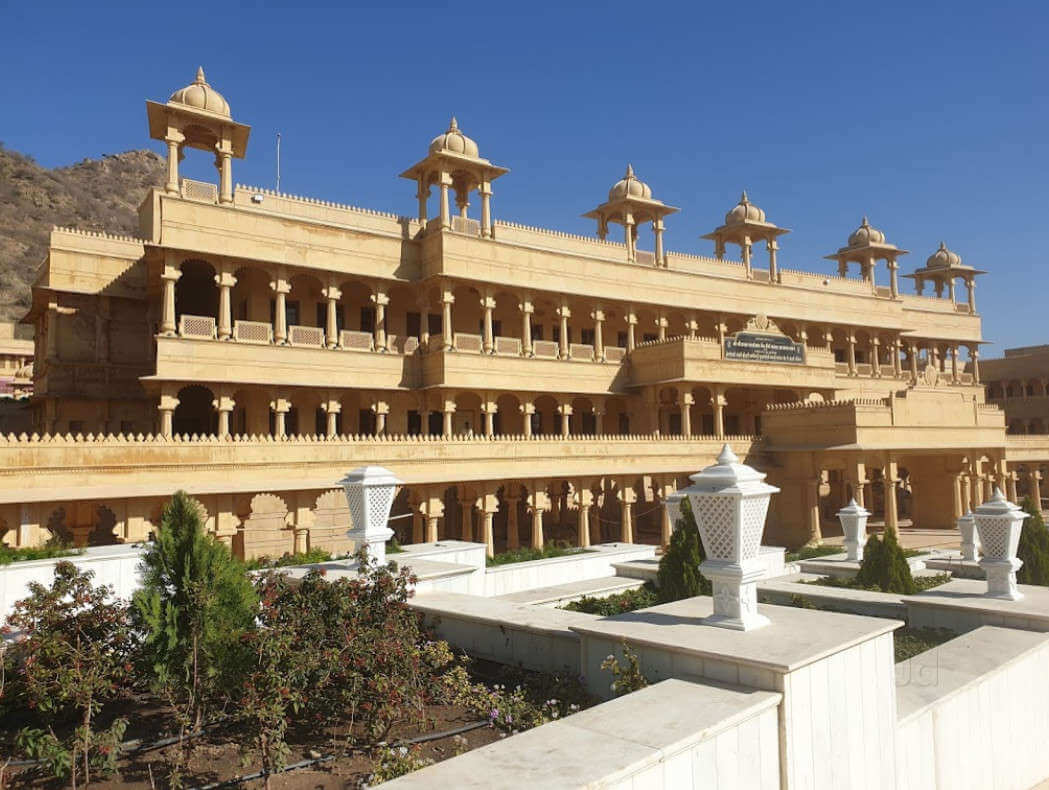 The Jirawala Parshwanath temple dates back to the 11th century. there is a very interesting story related to the construction of the temple. It is believed that the Guardian diety of Shri Parshwanath Bhagwan appeared in the dream of Shri Amrasa and guided him to build the temple. He told that the idol of Sri Parshvanath Bhagwan is beneath a cave outside  Jiravalli on the foothills where it would be found. The temple is built according to the instructions of the deity.

The temple has 108 idols of Lord Parshwanath who is also referred as ‘Dadaji’. The temple is carved with intricate designs and patterns and is a great spot for tourists and the pilgrims.

The Massive Fort with Second largest wall in the world Built during the 15th century, The Kumbhalgarh Fort holds a significant place in history as it has the Second largest wall in he world after the Great Wall of China. The fort is bordering  Udaipur and is 3600 ft tall and 38km long. The fort was built by Rana Kumbha and has witnessed major and deadly wars.

The fort features various Hindu and Jain temples inside along with seven massive gates. Also, the Lakhola Tank built by Rana Lakha is a popular attraction inside the fort.

It is also believed that Kumbhalgarh fort is the birthplace of Brave warrior Maharana Pratap. An annual festival is held for three days in the fort by the Rajasthan Tourism Department to celebrate the valour of Maharana Kumbha and his love and affection towards art and culture.

Rajasthan is full of magic when it comes to its beautiful places, vibrant colours. There are energy, charm and a sense of happiness in the air of Rajasthan. Every tour to India is incomplete without visiting this beautiful state; don’t you think guys? So, “Padharo Mhare Des” because “ Jaane Kya dikh jaaye”!

Do you know any other must-visit places in Rajasthan, let us know in the comments section!

Different Types of Squats to Get a Lean Sculpted Body!