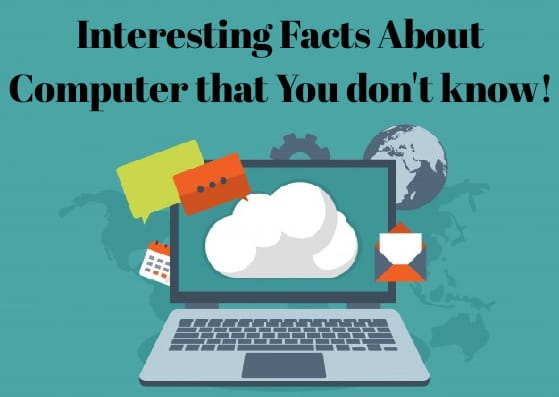 Computers are a part and parcel of our lives. It can be used to make presentations, calculations, for storing important files and documents, for watching movies, for listening to songs, for educational purposes and much more. This helpful device has a lot of interesting facts about it. Let’s go through some of them!

2.In 1964, Doug Engelbart made the first computer mouse whose body was made of wood.

3.The first electro mechanical computer was developed in 1939.

4.About 70% virus writers work under contract for organized crime syndicates.

5.The longest word that can be written using all the letters of the single row of the keyboard is “TYPEWRITER”

7.The first disk drive to use removable media was the IBM 1311. It was quite big resembling almost a washing machine and could store less than 5 megabytes.

8.Initial hard drives were bigger than the size of a fridge.

9.92% of world’s currency exists on computers while only 8% is in physical money.

10.Each month about 6,000 computer viruses are released.

11.Asteroids and Lunar Lander are the two games that were first ever made in US.

13.The case of the original Macintosh consists of signatures from each member of the Apple’s Macintosh division in 1982 which are 47 in total.

14.The longest word that can be typed with one hand is Stewardesses.

17.The group of 12 engineers who designed the IBM PC were called ‘The Dirty Dozen’.

18.Google, HP, Microsoft and Apple were all started in a garage.

20.The first popular web browser was released in 1993 and was called Mosaic.

21.Computer circuitry can be destroyed by mild static electricity.

22.Konrad Zuse is credited for creating the world’s first computer known as the Z1, in 1936.

24.The house where Bill Gates lives, was designed using a Macintosh computer.

25.Out of the top 500 supercomputers, only 2 run on Windows and rest are all Linux.